Greetings, traveler. I am Tobias Lear, the General’s personal secretary. Do come inside, though you have come to Mount Vernon on a most lamentable day.

The date, you ask? The 14th of December, the year of our Lord, 1799. It grieves me deeply to declare it – but General
George Washington has died. 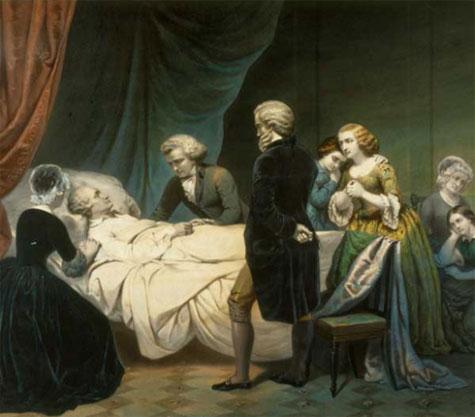 It happened upstairs, moments ago. You will forgive my disheveled appearance – the shock, you see - he was just well two days ago. May I sit while I tell you the tale? There, that’s better.

On Thursday, General rode out to his farms. It was snowing, with some hail and rain – nothing that would daunt a constitution as strong as his. He was out again the following day, only to return complaining of a sore throat. I encouraged him to take something, which he declined.

That night I was roused from sleep to find the General in a grave state – nearly unable to speak. Immediately, I called for his overseer Mr. Rawlins and good friend Dr. Craik, who bled him. Bleeding is said to restore the body’s humors, you see, letting sickness out. They gave him teas and poultices, gargles of vinegar and sage. Nothing gave him relief, or comfort. It was then he asked for his will.

At his bedside, I reached for his hand. “My breath cannot last long. I believed from the first that the disorder would prove fatal,” he said. He seemed so perfectly resigned - dignified, even - despite his gasping breaths. Christopher Sheels, his manservant, was there, ever attending his master – the General bade him to sit and rest. 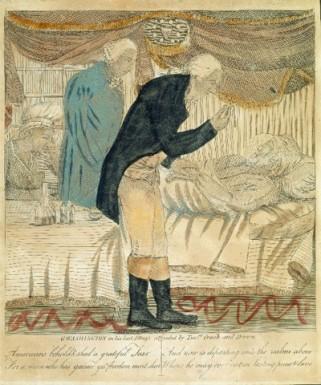 “I am just going”, he said. After uttering some instructions, he whispered finally, “’Tis well.” And then he expired.

Dear Mrs. Washington, fixed in silent grief at the foot of the bed, looked up. “’Tis well,” she echoed, “all is now over. I shall soon follow him. I have no other trials to pass through.”

I can hear the household stirring now – there is much to prepare. His going will be remembered in the history of our nation, and I daresay, the whole world. You must forgive me - I find that on this occasion, it is manly to weep.