Architectural restoration provides an opportunity for new research and our inquiries can extend far beyond authenticity of paint colors or furnishings. Our current restoration is doing just that. Over the course of 2013 we’re getting used to a change in name for the “large dining room” as we restore its identity as the “New Room,” a phrase used consistently by George Washington. 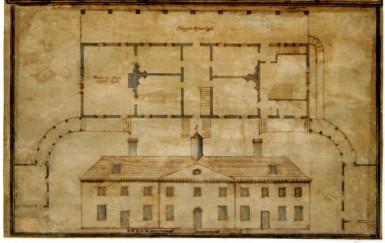 The first name given to the north addition to the Mansion was in fact “New Room.” On September 30, 1776, Washington wrote about his vision for laying out the room with a chimney “in the middle of it.”
When Washington returned from the Revolution, work began in earnest and throughout 1784 and 1785 the outstanding size of the room became its primary descriptor as Washington sought a stucco man for what he called the “large room.” Washington employed John Rawlins to oversee the room’s decoration and their February 25, 1786 agreement includes the phrase “distinguished by the Name of the New Room,” suggesting that General Washington had formally decided upon this name. Throughout the remainder of the construction documentation the name “New Room” was used consistently.

The deviations from “New Room” during Washington’s life are all interesting: Samuel Vaughan labeled the space “Drawing Room” on his 1787 plan; Washington’s secretary Tobias Lear called it a “great room” in a 1796 description; and Washington himself called it a “New Dig [dining] room” and “large dining room” in November 1796 and March 1797, respectively. These references suggest that as the space matured, its function was starting to take shape. Unfortunately, these tantalizing clues are all the evidence we have for this argument and “New Room” continued to be the primary nomenclature until Washington’s death in 1799. 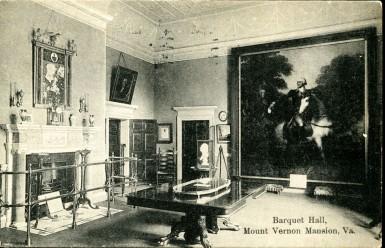 After the Mount Vernon Ladies’ Association purchased the property in 1858 they imposed a dining function on the room and “banquet hall” became the preferred name. From 1930s through the 1950s, Mount Vernon experienced a period of renewed research and scientific exploration and it is interesting to note that the “New Room” label resurfaced during these years and was even used in a 1951 publication. Overall, however, “banquet hall” continued to be the preferred name until the 1981 restoration. 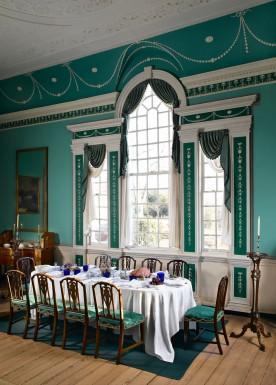 In 1981, the name “large dining room” was adopted. This more modern, functional name was something easily recognizable for visitors. Over the last 30 years, the focal point of the room was a dining table set with a lavish meal.

Today, as we strive to better understand the cultural world of George Washington’s time, we are rebranding the room as the “New Room.” Since George Washington most often used this wording, it grants authenticity to the space. It also points to the outstanding qualities of the room: it was something new for Washington, a multi-functional, formal space used for receiving visitors, showcasing art, and, sometimes for dining.