Modern visitors have come to know and love Mount Vernon’s north wing as the “Large Dining Room,” furnished with a long table, a white linen cloth, and an impressive display of tablewares. The functions of a large, formal dining room are easy for modern visitors to understand, and the array of china, glass, and silver, not to mention carefully crafted faux foods, vividly evokes the elegance and sociability associated with the great houses of the 18th-century elite. To think of this grand and impressive space as only, or even primarily, a dining room, however, skews it to the perspective of 20th- and 21st- century lifestyles, uprooting it from the historical context of 18th-century architecture, living arrangements, and social customs. 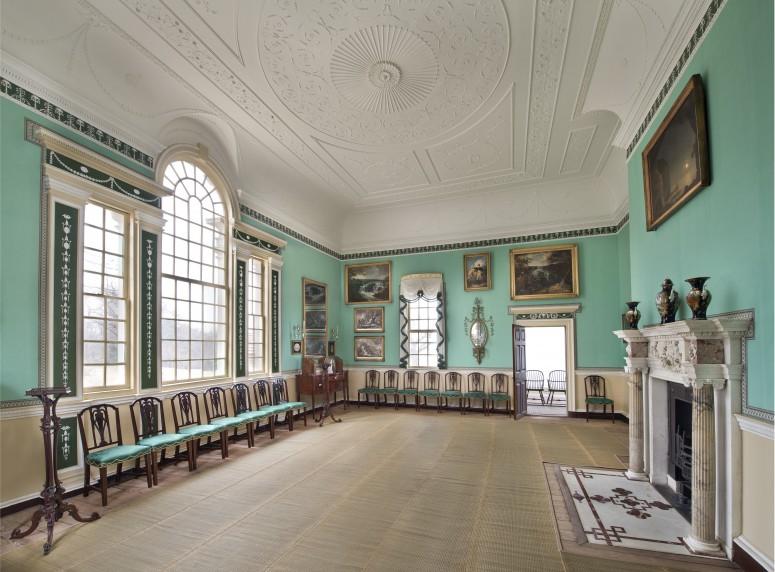 The New Room clearly served as a “show room” or statement room, in the tradition of grand saloons in 18th-century British country houses. Architectural historians have agreed that the New Room’s generous dimensions and harmonious proportions (roughly 4:3:2 length:width:height) derive from the tradition of “double cube rooms,” so named because of their impressive volume—with their length typically equal to two times the dimensions of their width and height. By the mid-18th century, such rooms had evolved in British country houses to grand spaces known as saloons, frequently located adjacent to an equally grand hall. The uses of a saloon are deeply embedded in 18th-century social structures and practices, making them elusive to modern audiences.

Unlike a library or a bedchamber, the 18th-century saloon is defined less by practical functions than by formal characteristics—notably great volume and height exceeding that of surrounding rooms and a strict adherence to symmetry. Combined, these characteristics make such spaces feel out of the ordinary. According to British architectural historians, 18th-century English saloons were “highly architectural in treatment, a magnificent setting for great gatherings rather than for everyday life, and essentially masculine in feeling, as opposed to the feminine attributes of the withdrawing room beyond. The German word prunksaal or show-room perhaps describes it best.” Typically, a saloon’s furnishings included large-scale works of art, with a set of seating furniture, often monumental in scale, arranged with tables around the walls. (Gervase Jackson-Stops and James Pipkin, English Country House, p. 82).

In the tradition of British country houses, George Washington’s New Room served as a destination for visitors to Mount Vernon. Accounts from the 1790s suggest an established routine (if not a route) for strangers who arrived with appropriate letters of introduction. As the English traveler Joshua Brookes recalled of his February 1799 visit: “we arrived on horseback about 12 … after a short time [Washington’s] secretary Mr. Lear his secretary came & invited us in, … he then invited us to visit the drawing room … he then accompanied us into a front small parlor,” after which the party returned to the sitting room (the rooms mentioned being those now known as the New Room, the West Parlor, and the Little Parlor). 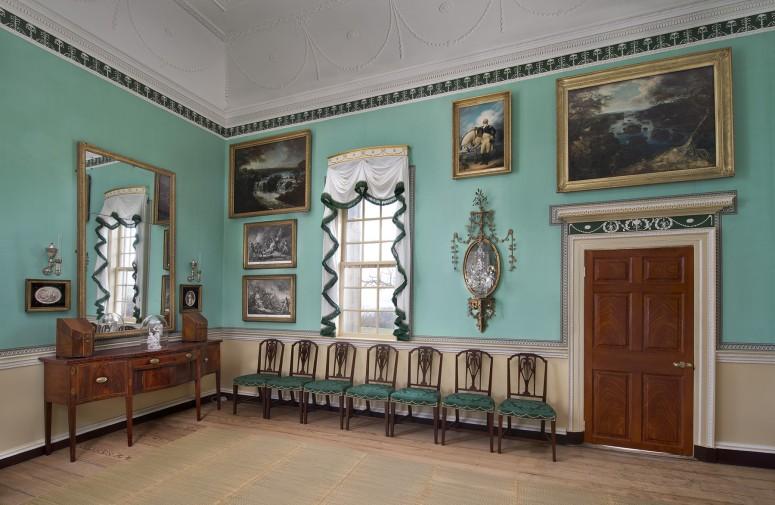 Like many English saloons, Mount Vernon’s New Room was permanently fitted out as the Washingtons’ picture gallery. The north light, streaming in from the magnificent Palladian window, provided ideal illumination for viewing the General’s pictures. According to Washington’s probate inventory, a total of 21 works hung in this room at the time of his death, most in impressive gilt frames. There were eight oil paintings, two pastel drawings, seven large prints, and four small ones, each of the latter hung under one of Washington’s new-fangled Argand wall lamps. The conspicuously symmetrical arrangement of the pictures and the sculptural quality of the furniture in the room emphasized its gallery function. 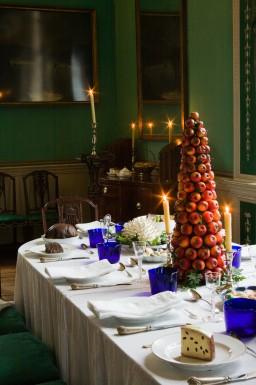 Also like saloons in grander English houses, Mount Vernon’s New Room could be pressed into service as a dining room when circumstances warranted, as when large numbers of guests or guests of high rank needed to be entertained. In 1798, the Washingtons hosted dinner guests on 203 of the 310 days for which records exist, or about 66% of the time. Only seven of these dinners, however, included more than ten guests, the number that would likely have fit comfortably in the Dining Room. Most of these occurred in the summer months of June and July, when the high ceiling and two exterior doors of the New Room would have allowed for much-needed cross-ventilation. The following year was busier, with 18 large dinner parties, most in conjunction with the February 22, 1799, nuptials of Martha’s granddaughter, Eleanor (Nelly) Parke Custis, and George’s nephew, Lawrence Lewis. 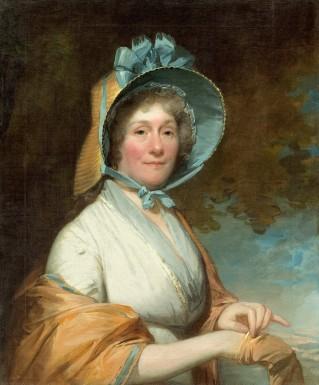 On some occasions, the presence of government officials, diplomats, or other high-ranking visitors would likely have called for the greater formality of the New Room. In November 1797, the Washingtons entertained a party that included the British envoy, Sir Robert Liston; his wife, Lady Henrietta Marchant Liston; and Mr. James Athill, the Speaker of the Assembly of the island of Antigua.

For these larger or more formal dinners, the Washingtons’ enslaved house servants would have moved the dining tables from the Dining Room and set them up in the New Room. The Washingtons evidently continued to follow the practice, prevalent in both English and Virginia houses since the mid-18th century, of dining on small, relatively portable tables that could be moved when needed, and folded up and arranged against a wall when not in use. The alternate custom—of having a large table permanently set up in the center of a dining room—was still relatively novel in late 18th-century England and would not become prevalent in American homes until well after the Washingtons’ deaths, around the second decade of the 19th century. Notably, George Washington’s 1800 probate inventory does not list any dining tables in the New Room; the only two dining tables listed in the Mansion are those located in the Dining Room.

The New Room was George Washington’s “statement” room. Modeled after an English saloon, it was an elegant multi-purpose space—permanently installed as an art gallery and occasionally set up for dining. Its soaring height, its bright green pigments, and its extensive, delicate neo-classical ornament surely made this space one of the most memorable rooms in the new American nation—even had it not been the setting for meeting the illustrious Washington, the man of the hour, the father of his country.