The Mount Vernon Mansion is the product of several 18th-century building phases, a layering of old and new.

As we figuratively peel back the layers, those phases reveal a great deal not only about the construction of the house but about George Washington himself, the Mount Vernon community, and the period in which they lived. When you think about the house and its evolution, the siding may not be the first thing that crosses your mind. Do not be fooled, though, - the siding has revealing stories to tell.

The earliest part of the house was built in 1734, for George Washington’s father, Augustine Washington. Dendrochronology, or the analysis of tree rings to identify felling dates for timbers, identifies that the central core of the house—including the passage and its four flanking rooms—was constructed at that date. While considered large for the time, that house was smaller than the Mansion we see today, standing only one full story, with a finished garret. 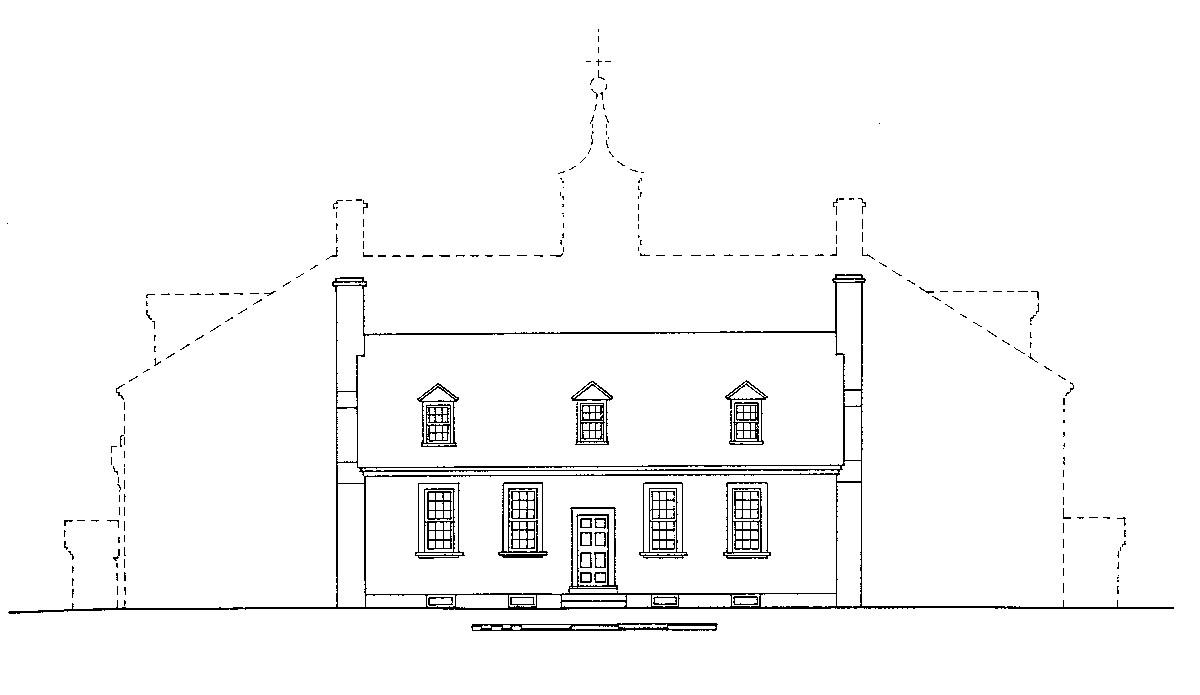 When Augustine passed away in 1743, the house went to George’s half-brother, Lawrence. Unfortunately, we don’t have much surviving documentation from Augustine’s or Lawrence’s lifetimes to provide us with a clear understanding of the house in this pre-George period. Work carried out in 2018 on the wall between the front parlor and the New Room—a wall that would have been an exterior wall in the 1734-1758 period—revealed nails that fastened wooden siding to the house frame before the 1758 expansion of the house. While this confirms what we suspected about the house having wooden siding, it doesn’t tell us whether that siding was rough clapboard or more refined (or even rusticated) weatherboard.

What we do know is that George Washington expanded the house upward in 1758 to include two full stories and a new garret. Washington ordered a large volume of materials for the project and, in June and July 1758, the installation of the “weather boards” was in process, and Washington and his carpenter, John Patterson, discussed the importance of getting these siding boards painted. By September, Patterson “got the outside of the House finishd.” We know what that 1758 siding looked like because some of it is still in place! That is because Washington decided to expand his house once again in the mid-1770s, this time to the north and south.

After ordering supplies in 1773, including “plank for Weather Boarding,” a south addition was constructed (the study wing) in 1775, followed by a north addition (the New Room) in 1776. Pieces of the earlier 1758 wood siding were trapped between the existing house and the additions. The trapped siding boards are beveled or notched at regular intervals to resemble rusticated stone blocks, and they have a sand-painted coating. The desired effect was the appearance of substantial, expensive stone. And, the sand-paint provided an added level of protection against the elements. In the words of Washington himself, “Sanding, is designed to answer two purposes—durability, & representation of Stone.” Characteristic of Washington, the treatment was innovative, functional and economical. Like the Mansion, the flanking kitchen building that existed at that time also had “rusticated Boards.”

When it came time to install siding on the north and south additions in the 1770s, Washington repeated a similar treatment of beveling and sand-painting. The vast majority of the siding currently on the building dates to these two Washington building campaigns. If you look closely, you can see evidence of the seams in the siding between the central block of the house and the additions. In the 1770s and 1780s, Washington also added details like a cupola on the roof and a piazza on the east side. A 1788 visitor described the exterior in this way, “it is covered with a kind of varnish, a cement that renders it almost impenetrable by the rain.”

By 1792, the Mansion exterior was in need of a fresh painting and sanding; because there was not enough paint and sand on hand, Washington wrote about the requisite supplies to accomplish the task. It took a bit of time for the sand-painting to occur because the north end first needed repairs. In the meantime, in 1796, Washington requested that an experiment be done to determine whether white sand versus local pounded sandstone (which is off-white), would be better for the job. As part of the request, he described the exact process for sand-painting.

Years later, Washington noted that the winner of the experiment was the pounded sandstone, particularly as it was “rare to meet with Sand perfectly white, & clean.” When the painting and sanding were executed in 1797, the sandstone combined with the 18th-century lead white-based paint underneath would have produced a cream-colored, textured effect akin to sandstone blocks. The 1797 painting and sanding campaign appears to be the last executed by Washington before his death in 1799.

These building and painting campaigns illustrate the use of materials that were readily available, such as wood for the siding and sand for the paint treatment, as well as Washington’s desire to manage cost and function while still innovating. The fact that Washington expanded his father’s house, rather than building new, suggests the importance of familial legacy to Washington. The evolution of the house is also a physical manifestation of George Washington’s rising social, political, and economic status, as well as his desire to make a statement with his house and his estate-at-large.

In 2019, up to 28 layers of paint and sand were removed as far down to the bare wood as possible without damaging the wood.

The 2019 restoration of the west front was the first in a multi-year response to paint failure apparent on the exterior envelope of the Mansion, largely due to heavy accumulations of paint and sand since the last full paint removal in 1980. The areas of failed paint have exposed parts of the wooden siding to the weather. Its associated architectural elements such as windows, window and door surrounds, and shutters also require some repair. So, true to the Mount Vernon Ladies’ Association’s mission to preserve and promote George Washington’s Mount Vernon, the time has come to focus attention on the Mansion’s exterior.

As each side of the Mansion is addressed, scaffolding will be erected and painters will remove many layers of paint and sand. After the paint is stripped, the preservation team will closely investigate the siding. Next, the team of preservation carpenters will execute wood repairs. Additionally, the widow sashes, shutters and doors will be systematically removed and areas of concern will be addressed by our conservators. Once all repairs are complete and the elements have been reinstalled, the front will receive a fresh coat of sand paint – using the same process that Washington described - returning it to its 1799 appearance.

Preservation of Mount Vernon is an ongoing process that began in the 19th century and continues today.