After years of investigating, Mount Vernon's experts have determined what the exterior color of George Washington's Mansion was in 1797.

When the exterior of the Mansion was painted and sanded in 1797 the lead white paint under sandstone produced a cream-colored, textured effect akin to sandstone blocks. This painting and sanding campaign appears to be the last executed by Washington before his death in 1799. 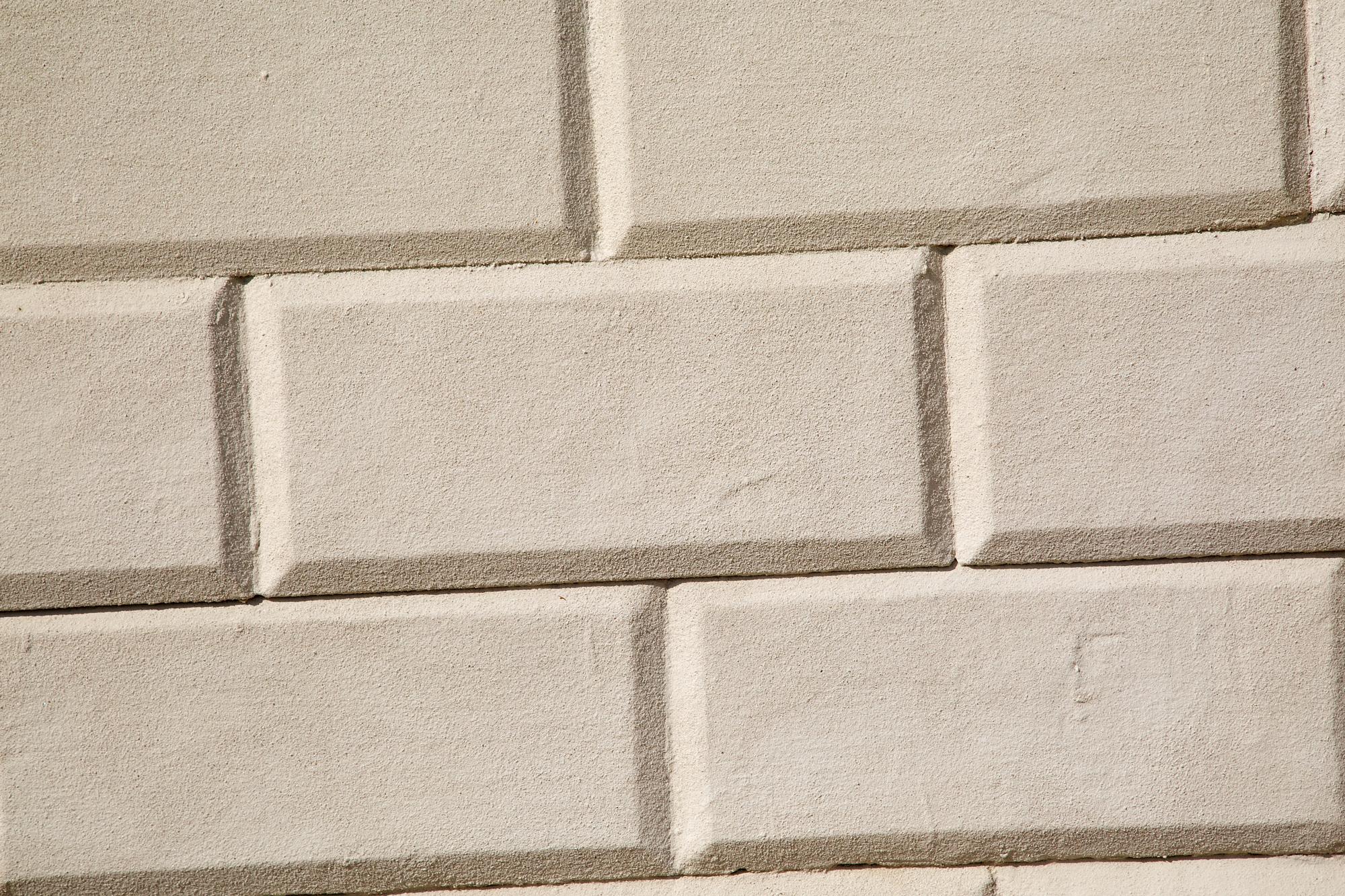 In a letter Washington wrote, dated October 1, 1799, he described the exterior of the Mount Vernon Mansion:

"all of my Houses have been Sanded with the softest free stone, pounded and sifted."

Meaning the building might appear to be made of stone, but is actually wooden siding that has been worked to achieve the look of stone blocks by first beveling the siding boards (a process called rustication). To make this illusion even more convincing, sand is thrown onto the wet paint to create a rough texture like the texture of stone.

According to Washington, he preferred this process for two reasons:

“Sanding, is designed to answer two purposes—durability, & representation of Stone; for the latter purpose, and in my opinion a desirable one; it is the last operation, by dashing, as long as any will stick, the Sand upon a coat of thick paint.”

Rustication involves notching the faces and beveling the edges of weatherboards to give them the appearance of cut stone blocks.

Sanding either by adding sand to the paint before applying or by throwing sand onto the wet painted surface until no more was absorbed.

Washington used a type of stone known as "free stone". The term “free stone” refers to stone that is fine-grained, uniform, and soft enough to be cut easily (freely) with a chisel without shattering or splitting. For 18th- and early 19th-century Virginians, “free stone” meant Aquia stone, a variety of sandstone quarried from Brent’s Island on the Aquia Creek, some thirty miles south of Mount Vernon, along the Potomac River in Stafford County.

Aquia Creek sandstone is typically gray or tan, sometimes with streaks or shades of red, yellow or buff, giving the stone a warm appearance.

Aquia stone was quarried from the late 17th through the early 19th centuries and shipped widely through the Chesapeake region, for use in architectural masonry and ornament, chimney pieces, bridges, and grave and boundary markers. Numerous Virginia gentry houses and churches built in the 1750s featured free stone elements in their exteriors, testifying to the popularity of this aesthetic in the period when Washington expanded his father’s house.

Washington chose Aquia stone for the Federal City – thus Aquia stone became popularly known as the “birthstone of the nation.”

Aquia stone at Mount Vernon was used for the cellar walls, the west stoops, the bases of the columns flanking the west front center door, and the fireplace surrounds in the Blue Room and Study. Washington sent to Aquia quarry for stone in 1774 and 1786, but there were also some local outcroppings of it. In 1796, Washington had his farm manager conduct an experiment to decide what type of stone should be used on the exterior of the Mansion.

To ascertain the difference with certainty between the Sand & pounded Stone take two pieces of Plank … and paint them in the usual manner with white lead [ground] in oil and after the first coat is dry give them a second (the paint a little thicker) and while it is fresh throw … sand against one, & pounded stone against the other, as long as they will stick, & till every part of the paint is well covered. You will then, when they are dry, be able to decide which will look best and most resemble stone; which, together with the preservation of the Wood, are the ends to be answered by this operation. Let me know the Result of the experiment as soon as it is made, that I may know what measures to take...

Washington confirmed in a letter in 1799 that not only had he chosen the free stone option for his buildings at Mount Vernon, but that he desired the houses he was building in the capital city be finished with the same material: “all my Houses have been Sanded with the softest free stone, pounded and sifted; and it is my wish to have those in the City done in the same way.”

During Washington’s lifetime, lead white was the only “white” pigment available for use in oil paint. It has a subtle reddish-yellow undertone. Later technologies brought different hues of white.

The only other coating capable of producing a bright white available in the 18th century was whitewash, a watered-down lime putty. Because this solution adhered well to plaster, whitewash was frequently used to achieve a bright white finish on interior walls, ceilings, and ornamentation.

Conversely, whitewash did not adhere well to wood, making it a less durable exterior finish than oil paint. All of Washington’s known references to exterior painting at Mount Vernon call for oil paint.

Paint analysis conducted in 2006 by Dr. Susan L. Buck, conservator and leading specialist in the field of paint analysis, corroborates the documentary evidence. Dr. Buck analyzed samples taken from two locations on the Mansion as well as the exterior of the rusticated siding of the Gardener’s House. She reported that all of the paint stratigraphies began with tan (the earliest layers) and became successively lighter in color over time (the later layers).

Of particular note are samples taken from what was the north end wall of the Mansion, erected in 1758 and effectively “trapped” by the building of the north wing in 1776. These contained three layers of paint, beginning with the lowest, earliest layer: 1) tan paint with no sand; 2) thick layer of tan paint with sand; 3) cream-white paint with sand. This last layer, applied prior to 1776, indicates continuity with the painting process Washington recorded in the 1790s. No whitewash was found on any of the Mansion samples.

Microscopic analysis also provided physical evidence of Washington’s use of Aquia stone for sand painting. The sand found in layer 3 of the pre-1776 trapped siding boards matched samples taken from the original Aquia stone blocks in the 1779 passage partition in the Mansion cellar. 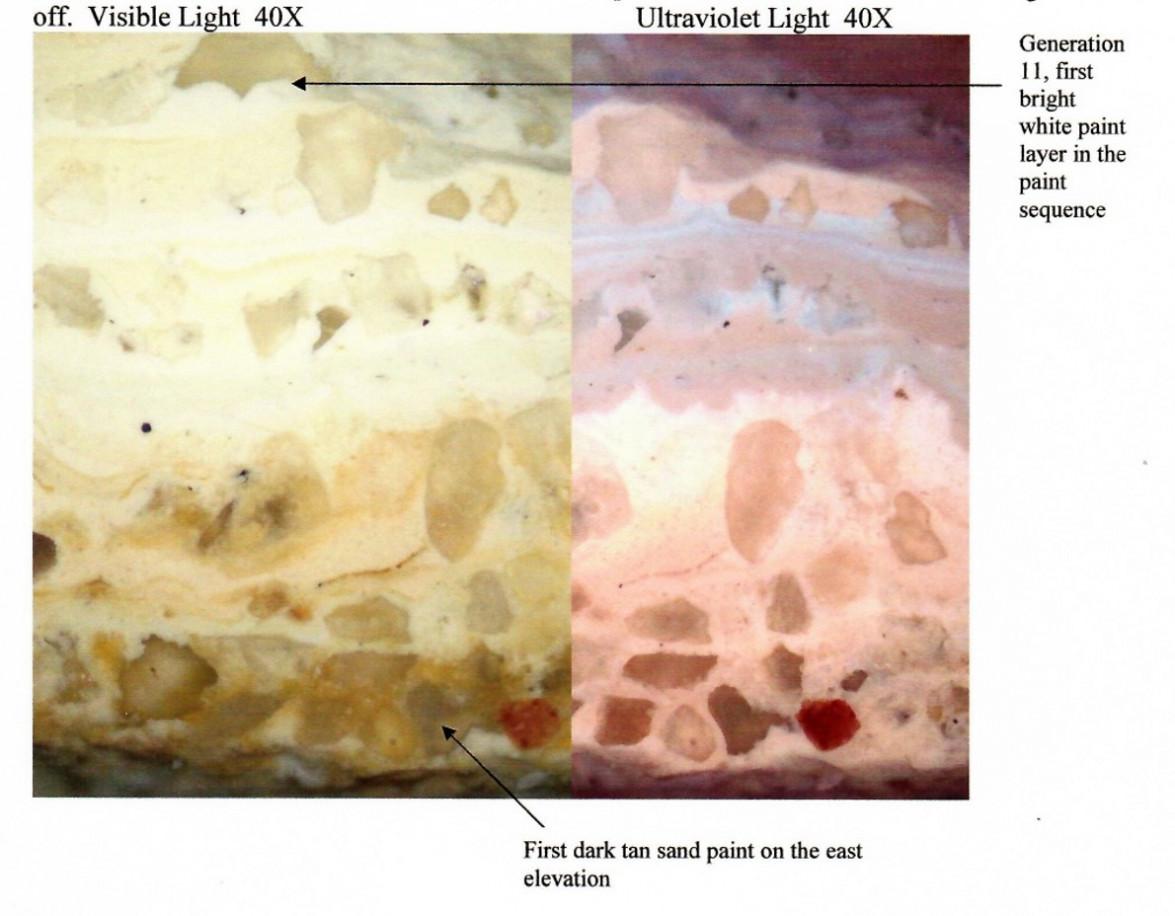 In looking at the painting of the west front by Edward Savage, the Mansion appears to be white – an illusion created by contrast with dark trees and lawn. However, when you compare the Mansion to a white background and compare it to a sample of Aquia stone, the surface takes on more of a mottled surface. Also, there is a definite contrast with dormers, cupola, trim around doors and windows, which appear “whiter” than the siding. It appears that the artist was carefully representing a stone color.

The materials used in sand painting the Mansion in 2011 were carefully sourced based on the documentary and physical evidence cited above. Dr. Buck matched the paint color to generation three of the sample from the pre-1776 trapped siding boards. This creamy white is typical of lead whites of the 18th century and was found not only on the Mansion, but also as the earliest paints on the Gardener’s House and the Seed House.

The sand found on the pre-1776 trapped siding boards and in the samples from the cellar walls was in turn matched microscopically to sand from the same geologic vein as the Aquia stone – the Oriskany Formation that runs through eastern Virginia. The application process replicated Washington’s, with sand applied to wet paint to create a Mansion exterior that resembles the free stone Washington wished to emulate.

Preservation of Mount Vernon is an ongoing process that began in the 19th century and continues today.