A closer look at Washington's staircases reveals details about life inside Mount Vernon.

In April 1759, en route to Mount Vernon with his new wife, George Washington dashed off a letter to steward John Alton directing him to clean and air out the Mansion, put out the beds and tables that had been stored away, collect some eggs and chickens, and polish the staircase “in order to make it look well.” While some of these instructions were about comfort, Washington understood the powerful impression a plantation house’s grand staircase could make and wanted his new bride, who was several rungs above him on Virginia’s social ladder, to understand that he was worthy of her.

Mount Vernon’s staircases—how they changed, how they were used, and by whom—tell important stories about daily life on the estate that don’t necessarily persist in the documentary record. They reveal the way Washington envisioned his household functioning and the way it actually did. Because of the way the staircases shaped the work of the house, they also provide important insight into the lives of the enslaved people who worked there. Moreover, these staircases continue to inform the interpretation and preservation of the house more than 150 years after the Mount Vernon Ladies’ Association began its work.

The grand staircase’s earliest appearance in the documentary record comes in 1758, as Washington began to transform the house he would inherit. The staircase needed special work. The original stair was much narrower and less impressive, so Washington’s builder, John Patterson, hired carpenter and joiner Going Lanphier to build the spacious staircase with well-turned balusters that continues to occupy the passage. Portions of the original stair were re-used to create the new stair to the third floor, but determining how to place it raised concerns.

In August 1758, Patterson wrote to Washington, “In regard to pleacing the Stairs up to the Garret, I do not intend to adapt them in the Room mentiond, in the last Letter, but opposite to the head of the old Stair Caise, takeing them off from the store room.” Patterson’s recommendation is the configuration that exists today, but Washington was apparently unsure enough of this plan to write to his close friend, George William Fairfax of nearby Belvoir, who was checking on the builder’s progress.

The alternative was to have these stairs begin in a second-floor room that was initially intended as a lumber room. In response, Fairfax offered these considerations:

I am at a loss unless I know whether you intend that for Lodging Appartments for Servts. If not the Stairs may be carried from the left hand room, which you design for Lumber, without making it publick.... If the Little Stairs ... will be an Eye-sore you may find a door which will make it uniform. 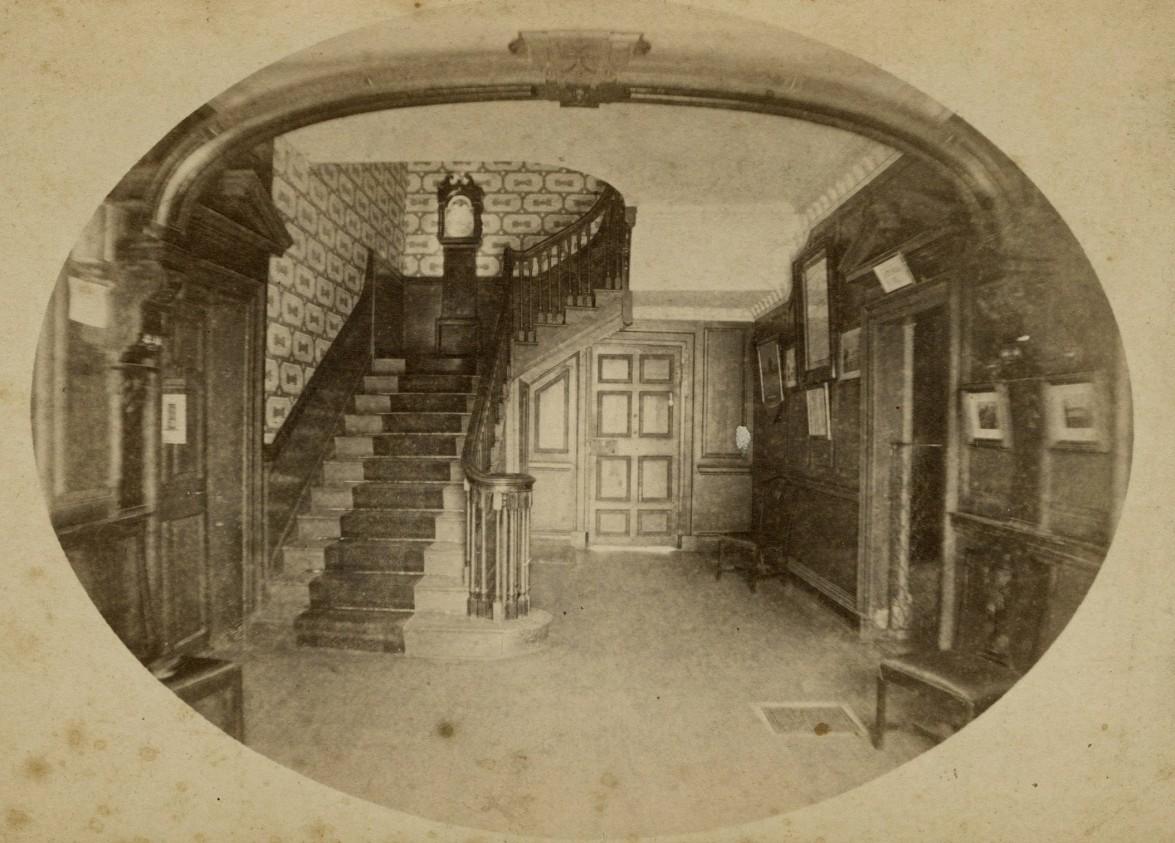 From Fairfax’s perspective, the main questions were whether Washington wanted his enslaved or indentured servants to sleep in the house, and whether these “Little Stairs” might be an “Eye-sore.” Washington chose the option that would allow him to have more flexibility in his use of the third floor, including the possibility of lodging enslaved or indentured workers there, although there is no evidence of his ever having done so.

In some ways, Mount Vernon’s plan anticipated houses that would be built in the next decade. The back staircases that had appeared in other plantation houses between the mid-1720s and 1760 were slowly falling out of fashion, even though they effectively hid many mechanics of running the household. Not adding a back stair to the Mansion meant that Mount Vernon’s enslaved house maids, Sall, Moll, Charlotte, Caroline, and others, were laboring in full sight—and, when carrying chamber pots, full smell—using those main stairs. Only when he began expanding Mount Vernon again in the 1770s did Washington decide to put in a back staircase, and even then it was for his own privacy, comfort, and convenience. He also added a small interior stair in the west vestibule that linked the service spaces in the basement to first floor.

As Washington again employed Lanphier in the 1770s, there are similarities between the craftsmanship of the main staircase and the smaller one that leads from Washington’s bedroom to his first-floor study. The back staircase did provide access to the south wing, but the enslaved women who cleaned the house would most likely have used a more arduous route to move around within it: up the main stairs to the second floor, then either back downstairs and through the first-floor guest room or the family dining room and study to the back staircase, or up to the third floor and then down another small staircase to reach the Washingtons’ bedchamber. Alternately, they could come back down from cleaning the second floor, exit onto the piazza, and re-enter the south wing. Their work would also take them into the cellar, which could be accessed from the interior only by using the stair in the west vestibule, or by exiting the house and using the south cellar bulkhead entry. This circuitous route would have made the labor-intensive maintenance of the household even more time-consuming and put those enslaved women in longer contact with those who enslaved them.

Because of the importance of preserving the staircases and the challenge of taking large groups up and down the narrow garret staircases, today’s visitors rarely get to see how this would have complicated the work of enslaved people who worked at Mount Vernon. Instead, a doorway added in the 19th century connects the second floor of the house’s core to the south wing, leading visitors directly to the Washingtons’ bedroom from the Yellow Room. Nonetheless, the main staircase, its 18th-century infrastructure mostly intact but reinforced, continues to carry the nearly one million visitors who come to Mount Vernon each year as they move in the footsteps of the many people who lived, worked, and visited the Mansion. 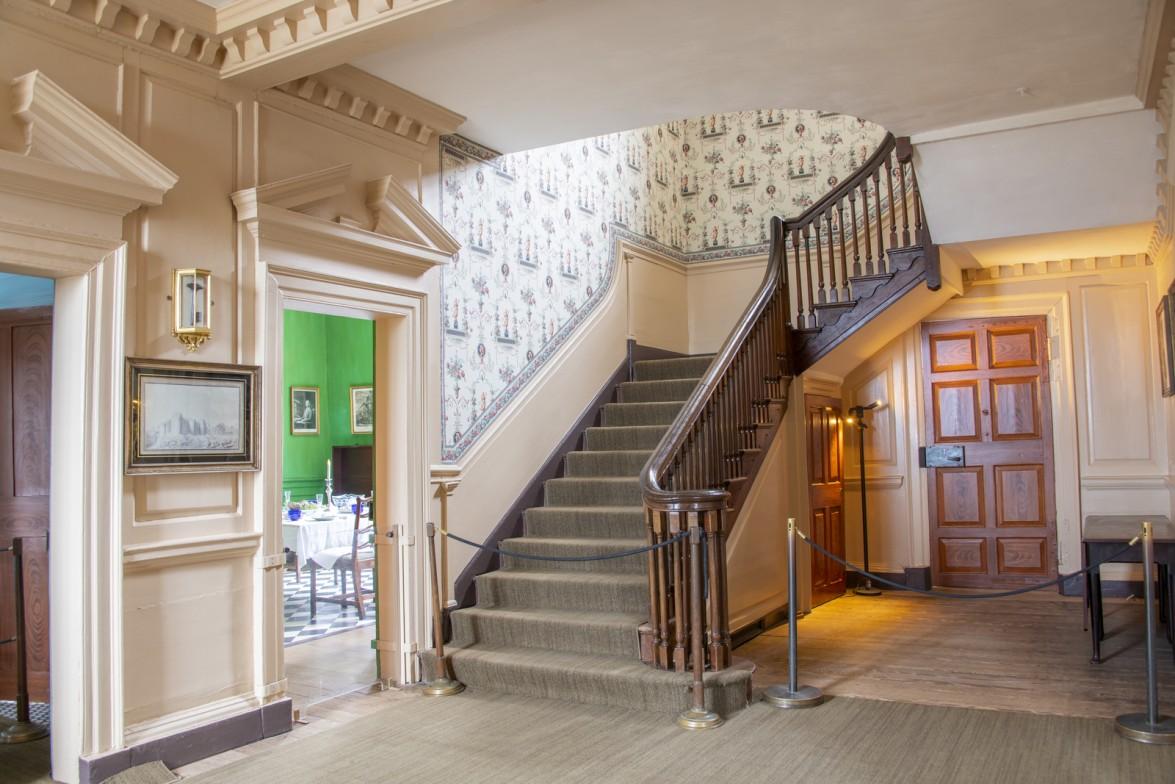 A member of the Washington Library’s 2015–2016 class of research fellows, Erin Holmes holds a Ph.D. from the University of South Carolina. She is presently a Visiting Assistant Professor of Public History in the Department of History at the University of Missouri.

Listen as Dr. Holmes joins Jim Ambuske on the podcast "Conversations at the Washington Library" to discuss maps of the Early Republic.

This article originally appeared in the Spring 2018 issue of Mount Vernon magazine. Subscribe to the magazine by becoming a member today.