Below is a transcript of only part of Steve Bashore’s interview with Dr. Joseph Stoltz. You can hear the full interview in an episode of Conversations at the Washington Library.

What is your background? 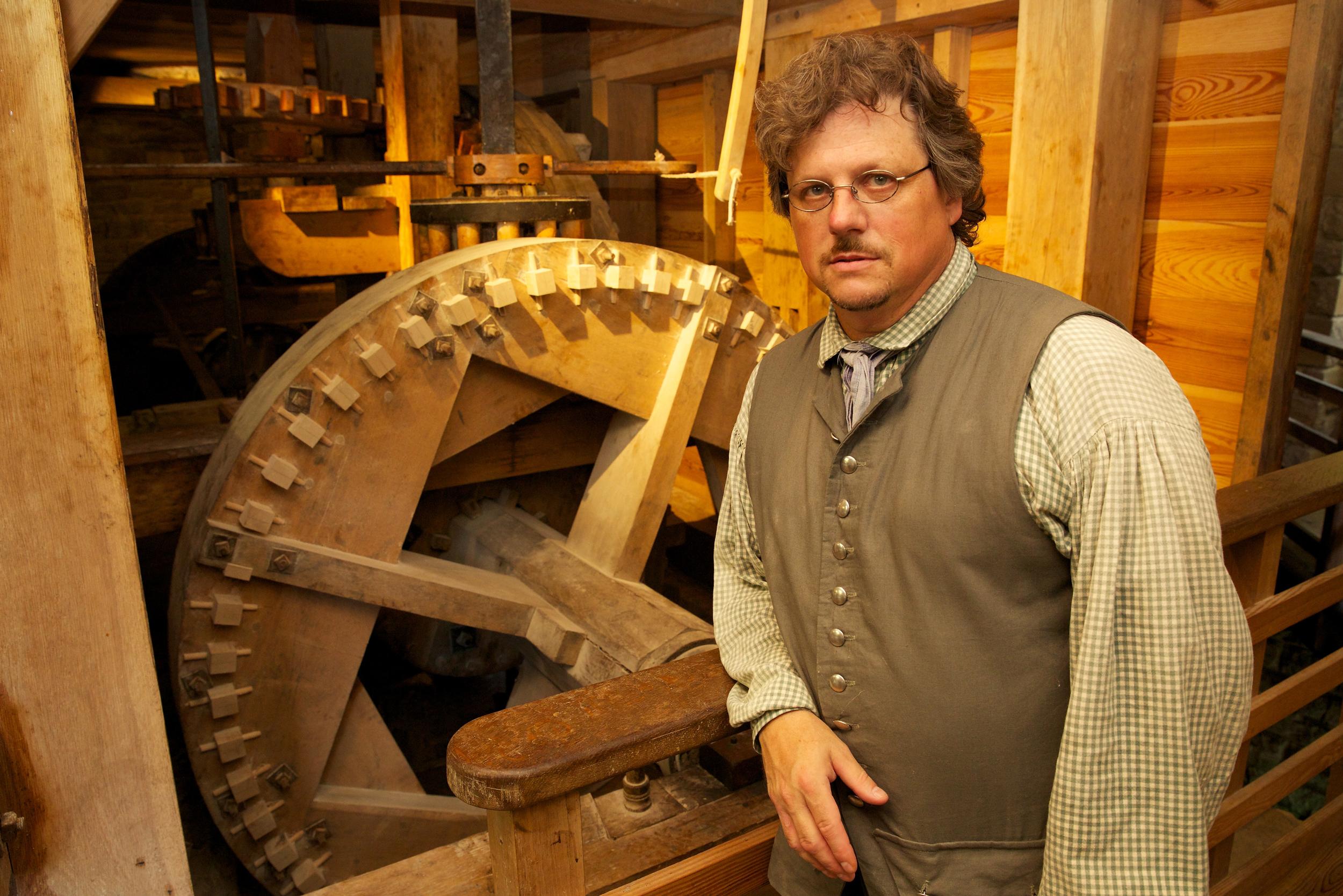 I have been fortunate to learn a lot about milling and distilling in the last eleven years here at Mount Vernon. 25 years ago, I started working at my first historic mill and learned how to run water-powered machinery and grind grain. A few years at that mill led me to another historic site, Stratford Hall, which is an 18th-century house, with a restored mill that I operated and helped a millwright restore again.

When the position opened up here at Mount Vernon in 2007, they were restoring the distillery and the gristmill was running, they needed somebody to manage the site. I applied and was fortunate enough to get the job. I never would've thought years ago I would end up in this sort of field.

Could you tell us about historic milling? 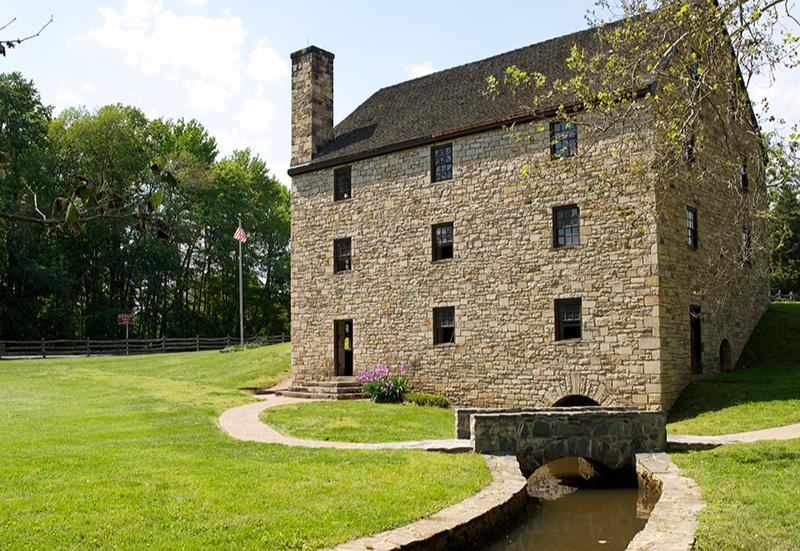 Milling is an ancient tradition that goes back to 100BC. Roman historian Vitruvius describes in pretty great detail a vertical wheel water mill with wooden cog gearing. By the time of George Washington, water mills are fairly advanced and some of them quite complex. What is neat about the trade is that you are in a way, in a very basic, rudimentary machine, but there are aspects of it that are more highly technical, and the skill set to run them is technical. I love the fact that it marries both things.
In the history of mills, there have been two ways to grind grain: by pounding, grinding, or with a roller. The modern mill is a roller mill, which came around in the 19th century. In Virginia in the 18th century, there were windmills but most were water powered.

As a miller running a water mill, you have to really get to know the machine. Whatever mill you run, you learned pretty early whether it is running in the right manner, or there is something wrong, and you have to learn technical things too in order to take care of it and run it properly.

Then there is a division between running for demonstration purposes versus actually making food grade product. I think the separation is important to note in that there are many people that can run mills and give tours. To do actual production grinding is another level and we produce a product to sell to the public and use in our Mount Vernon Inn.

What is milling’s place in colonial Virginia society?

It is twofold because mills had to be there for sustenance. Most landowners of a certain wealth level would have the capital to construct a water mill. There are certainly these estate mills, or plantation mills like Washington had, and there are independent mills. People that maybe owned some acreage around the mill, whose main job was to ground grain, brought to them by farmers.

In the colonial era, some of the regions that became big milling regions were around New York, Philadelphia, the Delaware region, and this part of Virginia. The Caribbean markets opened up in the 1670s. The colonial mills had enough sustenance for the people there, so then they looked for new markets. Early exports to the Caribbean of flour and cornmeal started and they brought back rum and molasses.

The market grows so much that American flour mills are exporting an amazing amount of flour. We have some records here at Mount Vernon that indicate one shipment went to Italy and even Suriname.

You have mills that can produce six, seven, eight thousand pounds of flour a day by the time of Washington. One could argue there was a pretty good development of American industry in the 18th century. Not just in flour, but in sawmills, and in water-powered forges. The iron industry in America was pretty well developed by the time Washington was a fairly young man.

Watch the water wheel turn and the mighty gears rotate as we grind grain with a reconstruction of George Washington's 18th-century system.

Stone-ground at the Gristmill

Treat yourself to grains stone-ground by water power at George Washington's Gristmill.

See, hear, feel the power of our working gristmill here at Mount Vernon. This video shows many of the…

Learn more about the milling process at Washington's Gristmill from our master miller, Steve Bashore…

What sort of labor and effort is required to build a mill in the 18th century?

This is where you get into the topic of the millwright, a traditional builder of mills. These people are highly skilled in carpentry, but they also are engineers and they know how to lay out all the gearing, to make that mill function. They know about hydraulic or wind power and how to construct things.

If you look at records of a carpenter’s wage in the 18th century, their fees are quite astronomical sometime, because they are highly skilled. If your mill is not built right, it is not going to work which is a huge investment lost. Over the centuries, these people passed this trade on. I have done a little research in the northern neck of Virginia and I have been able to trace a number of millwrights. You see the apprentices who later take over as the millwright.

Millwrights often had an apprentice under them and sometimes others. When you are building a mill, you need masonry work, scaffolding, and framing of the building. It is amazing Mount Vernon's mill in 1770 was built in 14 months.

Washington hired a man named Mr. Ball, who was a millwright. They decided where the mill should be, how it would be built, and what it would contain. Ball then oversaw construction in the early 1790s. When Washington installs the famous Oliver Evans system in the 1790s, the son of Mr. Ball was the millwright.

When and why did Washington order construction of the mill at Mount Vernon?

Washington bought a mill up on Doug Creek, with over 100 acres. It really fed the plantation. What Washington builds is a merchant mill. He builds it because he is abandoning tobacco as his cash crop. His land was exhausted from growing tobacco. His crop was not that good of quality; he is going into debt and decided to switch to grains. Wheat being the key grain to export as flour and that led to the building of that mill in 1770. It opened in 1771 and flour became one of the key revenue streams for Mount Vernon.

Washington was always looking for innovations, in his studies of various agricultural endeavors. In 1790, the patent office formed and Oliver Evans patented the automated milling system. Washington as president had to sign approved patents. Evans’ patent came across Washington’s desk; he signed it, and then had Tobias Lear, his secretary, contact Evans.

Washington paid Evan’s the licensing fee, $50 per set of millstones that would run on the new system. Evans could not come, but sent his two brothers, who were millwrights, to Mount Vernon. Along with the younger Mr. Ball, they retrofitted Washington's mill with the elevators and the flour cooler, which was called the hopper boy, and it basically connected all the devices in the mill into one continuous system so that the grain would flow through the process automatically. The system greatly improved the efficiency of mills and, one could argue, the quality of flour.

George Washington's merchant gristmill was capable of producing 5,000 to 8,000 pounds of flour and cornmeal a day. Today, this milling system is faithfully interpreted, fully-functioning, and open to guests seasonally.