Visitors to the Upper Garden today can marvel in the landscape design that was originally imagined by Washington. However, the gardens have undergone many iterations in their lifetime. Discover the changes in these historic photos.

Albumen print of the upper garden

A pathway in the upper garden shows an unidentified man sitting on the steps with a sign to the right warning, “Do not break the flowers and shrubs.” Visitors were eager to bring home souvenirs including leaves, branches, flowers, often to the detriment of the living plants and flowers growing in the gardens, as a reminder of their time spent at the home of George Washington.

As a creative means to raise money, the sale of flowers began as early as the Civil War. Sarah Tracy, secretary of the MVLA and caretaker of the estate, sold bouquets of flowers from Washington’s gardens. As plant sales increased, a professional gardener was employed in 1881 and the greenhouse (conservatory) was used to increase production. The sale of plants and seeds at Mount Vernon continues today.

This photograph taken by the Leet Bros. is one of the first sweeping view of the garden space using a panoramic camera. The Leet Bros. operating out of Washington, D. C. began producing select photographic prints for the Association in 1902. Later, they also manufactured postcards of Mount Vernon views sold by the Mount Vernon Ladies’ Association.

A photographic lantern slide is a positive print sandwiched between two pieces of glass and bound together by a black paper tape. Often the photograph was painstakingly hand-colored to accentuate the image. The slide’s popularity took off in the late 19th century and continued into the turn of the century. Handcoloring is applied to the photograph to capture the beautiful hues of the upper garden.

Boxwoods have been a common fixture in the upper garden since Washington’s time. English boxwood is favored for its slow growth and tolerance of frequent trimming, ideally used as a border for planting beds and to line walkways. Given time to grow, coupled with its dense foliage, the shrubbery created intimate spaces within the garden.

Learn More About the Boxwood

Washington’s Greenhouse burned in 1835 and until the 20th century, the building sat in ruin.

This reprint of an original black and white photograph shows the remains of greenhouse slave quarters during winter.

George Washington’s substantial brick greenhouse was the focal point of the upper garden. Damaged by fire in 1835, the buildings that followed (see earlier photographs) featured a variety of functional structures still serving as housing and plant cultivation but straying from the original design. Utilizing early insurance drawings and an existing foundation, the Association championed rebuilding the complex and returned the building to its original form. Renovations began in 1948 and were completed in 1951.

Learn More About the Greenhouse

On July 16, 1798, Benjamin Henry Latrobe recorded in his journal,

For the first time again since I left Germany, I saw here a parterre, clipped and trimmed with infinite care into the form of a richly flourished Fleur de Lis.

Washington seems to have highlighted America’s French revolutionary alliance with a boxwood parterre.

View of the rose beds

A Victorian rose garden was added to the upper garden in the 1880s. Roses were not a species planted by Washington. Nevertheless, the flowers were prominently sold by the Association in the 1860s as bouquets, and later listed and marketed in an 1882 MVLA plant catalog. To better participate in Washington D.C.’s thriving cut-rose market, a rose house was built in 1888 at the east end of the garden. For more than one hundred years the outdated vestiges remained in the garden until removal in 1985.

View of the northeast corner of the upper garden with an unidentified man posing for the picture. The wood and glass rose house built just beyond the garden wall can be seen to the right.

Audrey Hepburn in the upper garden

For decades the upper garden has been highlighted in books, magazines, newspapers, and film. In May 1990, the television series Gardens of the World with Audrey Hepburn, featuring some of the world’s most beautiful noteworthy gardens, filmed a segment at Mount Vernon. The episode premiered on PBS in March 1993. Hepburn was posthumously awarded an Emmy for Outstanding Individual Achievement, Information Programming, in the fall of 1993.

Excavation in the upper garden

In an effort to better understand the layout and pathways of the upper garden as designed by Washington, an archaeological excavation of the garden began in 2009. The horticulturalists and archaeologists spent five years meticulously researching, excavating, and analyzing findings, uncovering new evidence and gaining new insights into one of the most cherished spaces at Washington’s estate. The results exposed large square beds bordered by wide, straight graveled paths that provided a simple route for navigating the space as visitors experience today. 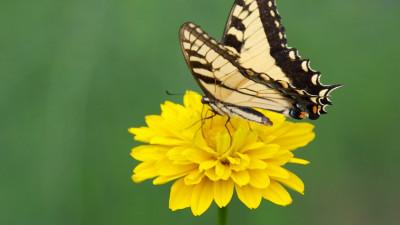 Want to learn more about the plants Washington grew and what's planted around the Mount Vernon estate?

Plant Finder provides guests a detailed view of every item grown on the estate.

You can take home part of George Washington's Upper Garden today through our heirloom seeds program.