George Washington enjoyed a reputation among his contemporaries for keeping "an excellent table". 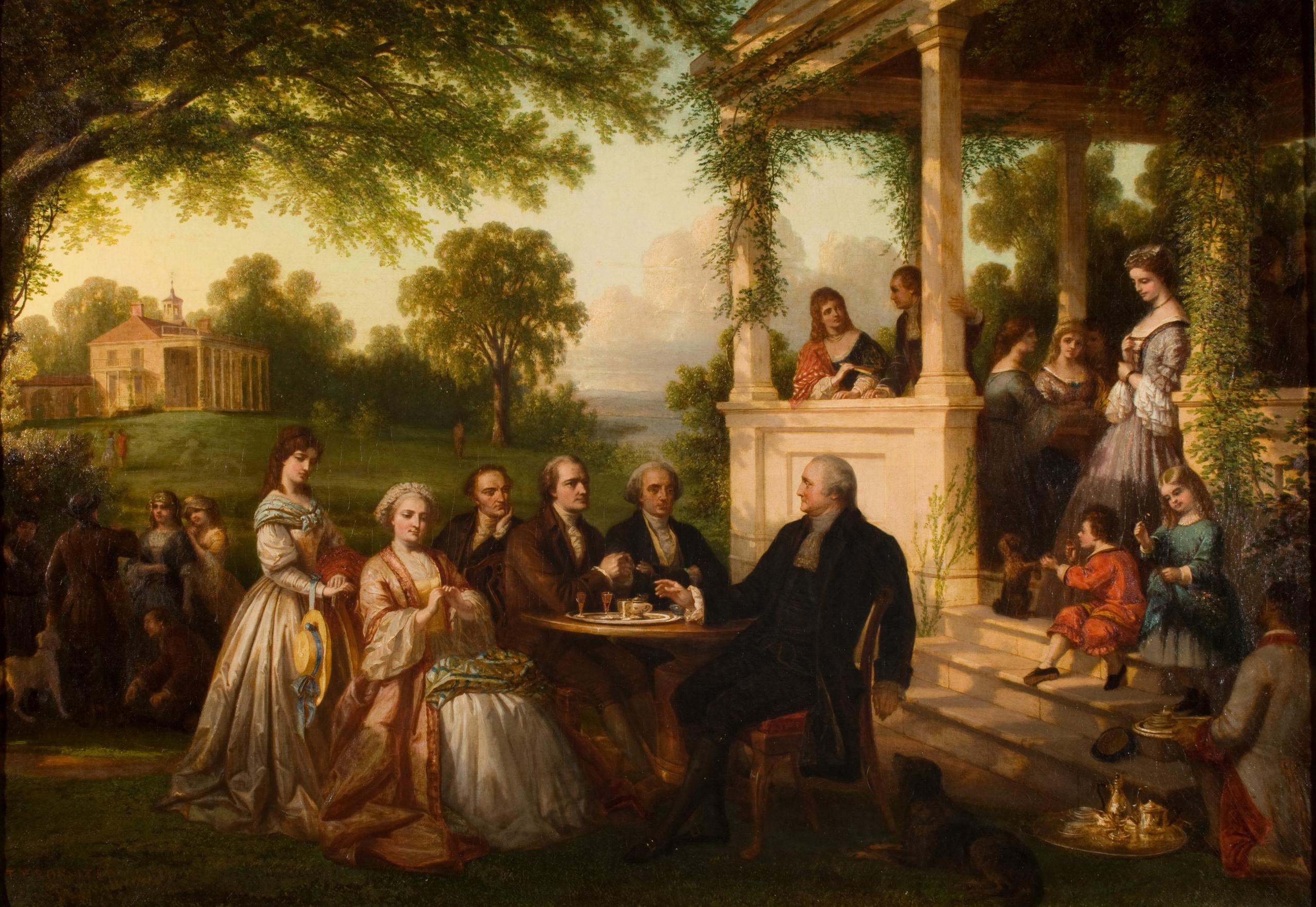 Welcoming a Wealth of Unexpected Guests

In the years following the Revolution, George Washington's popularity brought a steady flow of visitors to Mount Vernon and his description of his home as a "well resorted tavern" carried more truth than exaggeration. Strange faces appeared routinely at the dinner table, and dining alone was a privilege enjoyed by the Washingtons only twice in the last twenty years of their marriage. 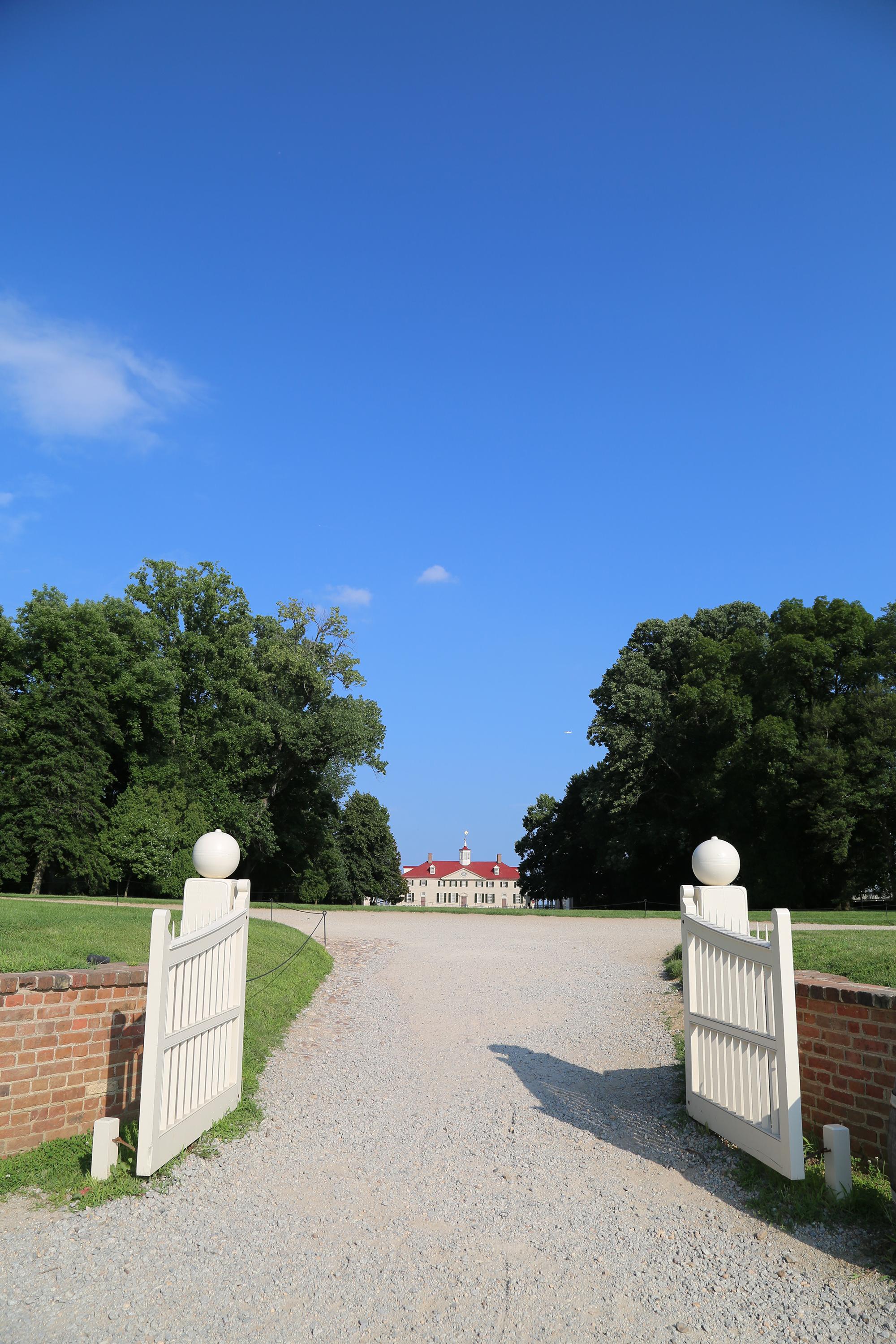 Born into a tradition of liberal hospitality, the Washingtons, like their Virginia neighbors, were accustomed to unexpected guests and dispensing a "bit of beef and toddy'' to those who appeared at their door was part of plantation life. Those who stayed for long periods were treated like members of the household and their clothes, linens, horses, and enslaved workers were all cared for by the Mount Vernon's enslaved community. Entertaining imposed heavy financial burdens and George Washington complained in 1787 of exceedingly high expenses brought on "not from any extravagance, or an inclination on my part to live splendidly, but for the absolute support of my family and the visitors who are constantly here".

Welcome as they were, the Washingtons' guests were expected to accommodate themselves to the family's domestic routine, and those who expected constant attention or excessive entertainments were disappointed. George Washington felt that his manner of living was "plain" but in fact, he enjoyed a reputation among his contemporaries for keeping "an excellent table" and it was the opinion of one guest that his "entertainments were always conducted with the most regularity and in the genteelest manner ... "

Household routines were firmly established with little variation from day to day. The hours for dining were set according to local custom and rigidly observed by the Washingtons. Attendance at the table was not required, but those who elected to join the general company were expected to appear within fifteen minutes of the dinner bell (although George Washington reportedly allowed a five-minute grace period).

Where Were Meals Served?

Meals might be served by enslaved butlers in any one of several mansion rooms depending on the size of the company and the season of the year. Guests could be served in their chambers, but most preferred to socialize with the family and other guests. Breakfast and dinner were regularly served in the dining room. A small one, situated off the first-floor passage, accommodated no more than a dozen people comfortably. 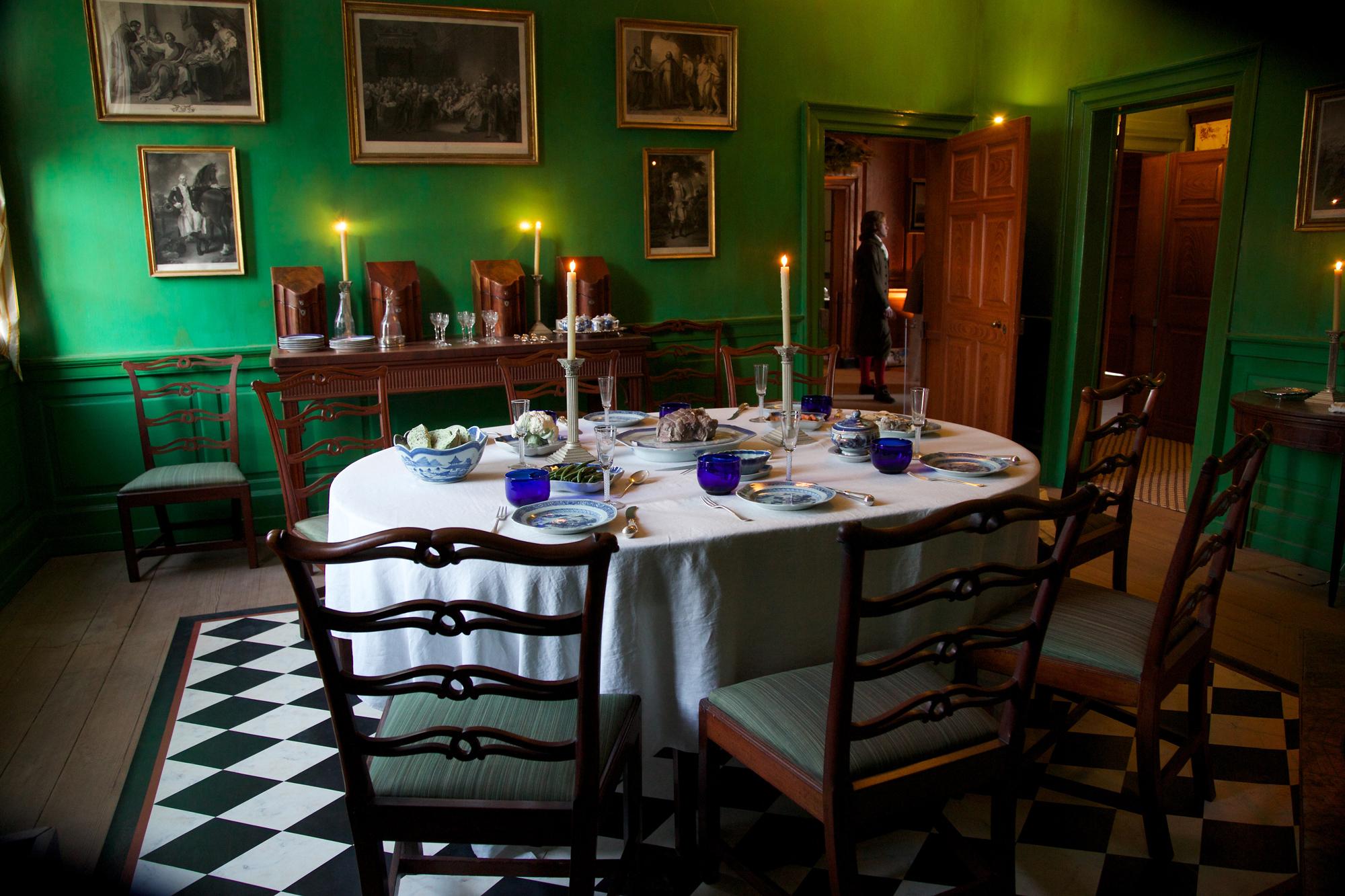 Before the completion of the New Room, which could be used for large gatherings, overflow guests could be seated in the passage outside the small dining room which was set up with tables made from boards placed across saw horses and covered with tablecloths. This convenient arrangement was used later in the New Room. Since the New Room was used for other social gatherings, portable tables that could be enlarged or reduced in size were highly practical. 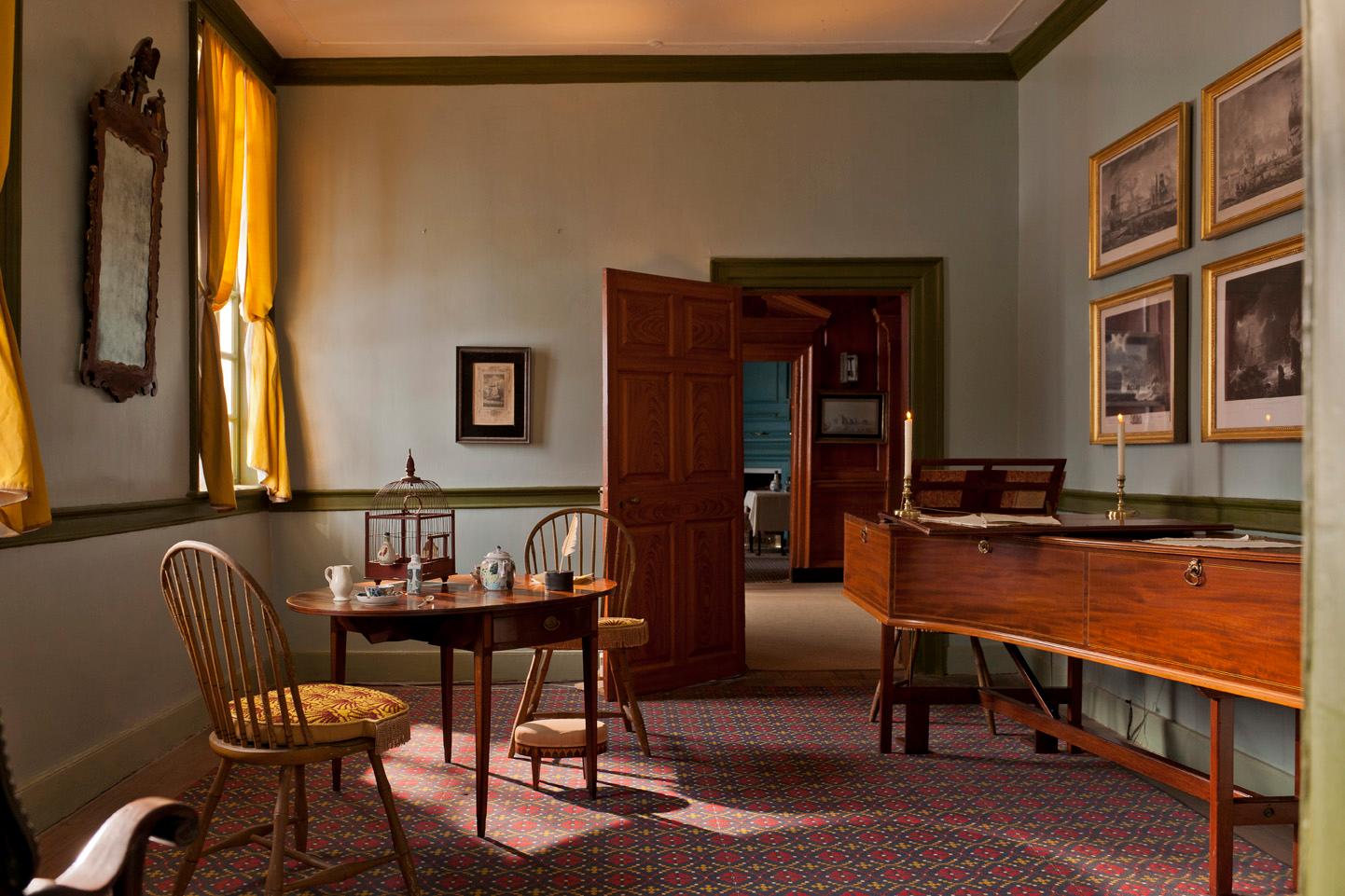 uests who arrived between the regularly appointed hours for dining might be served in one of the parlors. One late arrival in 1798 was served breakfast in a small parlor overlooking the river.

Tables were often moved by enslaved workers into the central passage for light refreshment or in good weather onto the piazza where Mrs. Washington presided at tea. This was the ideal setting in late afternoon when the sun had moved to the west and light southern breezes cooled the porch. In winter, tea and coffee were brought to the parlors, which were warmed by open fires.

Mount Vernon was equipped with everything required for a genteel, well-appointed table. In general, Washington's table furnishings followed the current fashion, though economy was a necessary constraint and ostentation for its own sake was out of character for Washington.

Before the Revolution, George Washington bought English goods, like other colonials. But after the war, he patronized American craftsmen and merchants whenever possible. English, French, and Chinese porcelains also graced the Mount Vernon table.

Table settings tended to follow the English custom where platters and serving dishes were symmetrically placed around the table. Evidence indicates that Mount Vernon adopted this traditional arrangement. Platters were garnished with vegetables or flowers and she followed the custom of offering a variety of foods from which the guests chose according to preference.

Visitors' accounts provide good descriptions of the kinds of food and wine offered by the Washingtons.  Joshua Brookes, who visited Mount Vernon in 1798, observed many details of service, the placement of dishes, and where each person sat.

A leg of boiled pork was placed in front of Martha and a goose before Lear. Roast beef, cold boiled beef, mutton chops, and fried tripe completed the assortment of meats. Hommony, cabbage. potatoes, onions, and pickles are also mentioned in Brookes' recollection.

The diners helped themselves and one another to the dishes before them which made for a busy and convivial scene. Three enslaved workers attended the guests and cleared the dinner and serving plates as needed. They kept the wine decanters filled and cleaned the tablecloth of crumbs before the dessert course which featured mince pies, tarts, and cheese.

At the conclusion of this course, the tablecloth was removed after which the guests lingered over apples, raisins, two kinds of nuts, port, and madeira. Wine, porter, and beer were available during dinner. On this occasion the host gave no toasts, but another visitor noted that after the cloth was removed, Washington drank to "all our Friends".

In the course of serving a meal, the enslaved workers traversed the distance between the mansion and the kitchen, which were connected by a colonnade, many times over.

Working in the Washingtons' Kitchen

The kitchen was one of four outbuildings located on the Courtyard within the formal setting of the mansion. Architectural uniformity dictated that their appearance conform to the mansion's overall appearance and these buildings were finished like the mansion with beveled boards coated with sand to resemble stone.

From the colonnade a door opened directly into the kitchen, the largest of three ground floor rooms, where the principal fireplace was located. Here the cooks busied themselves roasting, stewing, boiling, frying, and broiling the provisions. Multiple fires of different woods, depending on the type heat desired, could be accommodated at the same time in a large fireplace.

It was Mrs. Washington's habit before or after breakfast to go "through every household" department to inspect the work of enslaved individuals, the most important stop was the kitchen. Her grandson reported that she " ... gave orders for dinner," at this time, "appointing certain provisions, a pr of ducks, a goose or a turkey to be laid by, and to be put down in case of the arrival of company; a very necessary provision in that hospitable mansion ... "

The bread was prepared in the evening by an enslaved cook, depending on the year it could have been Doll or Hercules, under Mrs. Washington's watchful eye. The dough rose slowly overnight in the warmth of the kitchen. The next morning it was baked by one of the enslaved workers in the oven to the left of the fireplace. According to family tradition, because of the skilled cooks who were enslaved, there was no such thing as bad bread at Mount Vernon.

The Larder and the Scullery

Mrs. Washington's morning inspection also included the larder and scullery. Perishables and other provisions were stored in the larder where the floor dropped three feet below ground level. A lattice located about the door admitted light and air. Within the larder a cool atmosphere helped preserve foods. Some dairy products were kept here but a spring house situated several hundred feet from the kitchen was the principal storage area for these products.

The scullery, where a small fireplace could be used for auxiliary cooking, also provided storage space and a corner for washing dishes. From the scullery, an enclosed staircase led to a half story above where two rooms provided quarters for a housekeeper.

George and Martha Washington's famous hospitality would not have been possible without a staff of enslaved butlers, housemaids, waiters, and cooks.