Curious why there is scaffolding erected along the east front of George Washington's Mansion?

Beginning in March 2022 and continuing until the spring of 2023, scaffolding will cover the east front of George Washington’s Mansion, so that Mount Vernon’s preservation staff can undertake needed restoration work.

View our Mansion Exterior Restoration page for an overview of the project.

What would scaffolding during Washington’s life have been like?

As it is today, scaffolding was an essential part of building construction, maintenance, and deconstruction in the 18th century. Scaffolding was built of wooden posts that were set into the ground about four feet from the building. The posts were held straight by securing their tops with horizontal struts that extended to the building. To create stages or work platforms, additional struts were secured every six feet up the posts to allow workman to work up the wall; loose boards were laid upon the struts to create work areas. To make the erection and dismantling of the scaffolding faster, all of the connections between the various parts were accomplished by tying them together with cords or thin ropes.

Interestingly, when brick buildings were being constructed, bricks were left out of the wall and the horizontal struts of the stages were inserted into the empty holes, which are called “putlog holes.” After the building was completed, the scaffolding would be dismantled from the top down, and as the struts were removed from the wall, the holes were usually filled in with bricks, but not always. If you have a sharp eye, you can sometimes pick out the putlog holes in the walls of an 18th-century brick building.

What is the exterior of the Mansion made out of?

While the exterior might appear to be made of stone, it is actually wooden siding that has been worked to achieve the look of stone blocks by first beveling the siding boards (a process called rustication). To make this illusion even more convincing, sand is thrown onto wet paint to create a rough texture like the texture of stone.

Why did Washington want to coat the house in sand?

Luckily, we have correspondence authored by Washington explicitly stating why he wanted to coat the house in sand. In a letter to White House architect William Thornton, dated October 1, 1799, Washington noted, “Sanding, is designed to answer two purposes—durability, & representation of Stone; for the latter purpose, and in my opinion a desirable one; it is the last operation, by dashing, as long as any will stick, the Sand upon a coat of thick paint. This is the mode I pursued with the painting at this place, & wish to have pursued at my houses in the City.”

How much of the siding is original?

The vast majority of the siding is original, on all elevations of the Mansion.

One exception is on the south end, where a section of siding was replaced in the center of the elevation. That is because George Washington’s nephew, Bushrod Washington, added a porch and enlarged the windows in the 19th century. These changes were reversed in 1931 and the elevation was returned to its 1799 appearance, which required replacing the windows and some of the siding. On the east front, we do not expect much siding replacement.

Once the paint is removed, the preservation team will be able to closely investigate the siding, looking at any remnants of early primer and paint, nail evidence, tool marks, seams, and wood type, with a goal of distinguishing early versus replaced elements. In fact, preliminary paint analysis and documentary research have already confirmed that 18th-century paint is still in place in an upper corner of the siding.

Wasn’t the Mansion recently repainted? How often does the building need to be painted?

Before 2022, the east front was last repainted and sanded in 2012; however, the paint and sand were applied over the top of the many previous layers of paint and sand. While the frequency of painting and sanding has varied over time, our most recent goal has been to paint and sand every five years. The 2012 paint campaign utilized new paint and sand, so we monitored performance very closely; the new combination held up better than previous generations.

The problems seen at this time relate to the failure of the older paint layers beneath the most recent sand and paint, so it has become necessary to strip the siding down as close to bare wood as possible.

Regular painting and sanding are imperative in order to keep the surface weather-tight and protect the siding and underlying structural frame from deterioration and damage from exposure to the weather. At the same time, we need to ensure that the layers of paint and sand have not accumulated to the point of delamination (falling off), which also compromises that weather-tight seal.

Does any of the Washington-era paint survive? When was the last time the Mansion was stripped to bare wood?

On the east front, in the upper south corner (at the study end of the house), there is an area where the paint has never been removed, so the earliest paint layers still survive. This area is constituted by the uppermost 10 courses from the north side of the back stair hall window to the south edge of the elevation. The rest of the second story siding was first stripped in 2006, and the first story siding was last stripped in 1983.

During the 2021 phase of the project on the south elevation, we also found surviving early paint above the Washington Bedchamber windows, trapped under 20th-century, replacement window surrounds (or architraves).

What color will the Mansion’s exterior be after all sides are repainted? How do you know that the color is appropriate?

The base paint color will continue to be a creamy white or off-white typical of lead-whites of the 18th century. This color will be visible on the window frames, while the siding boards will receive the additional coating of sand. The sand is slightly darker than the paint, giving the finished surface a warm color evocative of stone. These colors are based on laboratory analysis of the early paint and sand on surviving siding boards, as well as Washington’s own words.

In November 1796, Washington requested an experiment to determine whether white beach sand versus off-white or cream-colored, pounded sandstone would be better for repainting and sanding the Mansion. He also described the exact process for sand-painting: (1) a coat of white lead ground in oil and allowed to dry; (2) a second, thicker coat of white lead in oil; (3) while the second coat is still fresh, throw the sand or pounded stone against the paint until it is covered; and (4) allow to dry. Later, while describing this sanding process in that same October 1, 1799, letter to William Thornton, Washington reported that the winner of the 1797 experiment was the pounded sandstone, particularly as it was “rare to meet with Sand perfectly white, & clean.” The 1797 painting and sanding campaign appears to be the last carried out by Washington before his death in 1799. 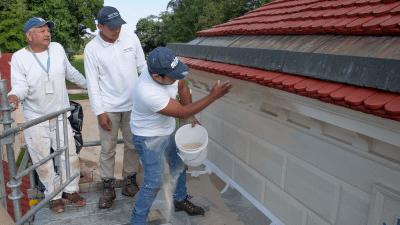 How is the process of sand-painting different than regular painting?

The primary difference between sand-painting and regular painting is that, with sand-painting, sand is literally thrown (by hand) on top of the final coat of wet paint. 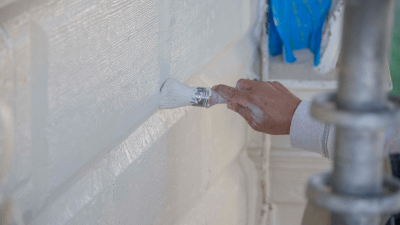 How many coats of paint and sand will be applied to the siding?

Our sand-painting process replicates that used in the 18th century: one coat of an oil primer, followed by one thick coat of oil paint. While the final coat of oil paint is still wet, sand will be thrown (by hand) at the siding until there is an even application. Then a second layer of paint will be applied to the siding and while it is still wet another layer of sand will be thrown.

What work is being done to the windows?

The window sashes will be systematically removed by Mount Vernon’s preservation team, working with extreme care to disturb as little of the original material as possible.

Depending on the condition of each window, the conservators will stabilize loose joints, conserve panes of glass, reinforce previous repairs, or install new glazing to form a weather-tight seal.

After the work is complete and the windows are restored, they will be reinstalled.

The east elevation of the Mansion prior to 2022-23 restoration work.

The preservation team is expecting that most, if not all, of the window sashes on the east front date to the 18th century. The project will give us an opportunity to confirm or revise those assumptions once the sashes are removed and we perform in-depth physical investigation.

The east front window restoration work started before the scaffolding was erected, with the Lafayette Room windows. Both of those windows, including the sashes, the frames, and the surrounds (or architraves) date to the 18th century.

In fact, there is at least one 18th-century window pane that survives, which has several signatures from the early 19th century etched into it. This pane will be conserved during the project.

What work is being done to the shutters?

The six pairs of east front shutters, which date to the 20th century, will be removed so that the preservation team can assess them and determine the level of repair needed.

At the least, they will be stripped of paint and then repainted and rehung.

Any needed repairs will be executed prior to repainting.

Will you work on the other elevations of the Mansion?

Why isn’t the west elevation symmetrical?

Prior to George Washington’s expansion of the house, in the late 1750s to early 1760s, the house’s west front was likely symmetrical. There is physical evidence in the framing to suggest that the locations of some of the first-floor windows south of the central door were moved during that building campaign. The impetus may have been to provide additional light to the dining room, making it environmentally more similar to the front parlor.

If you look at the west elevation, you will notice that the front parlor windows line up directly with the corresponding cellar windows below, where the dining room windows are positioned further south than the cellar windows below. During this project, through physical investigation, we hope to learn more about this question.

Mount Vernon is one of the best documented and most complete examples of an estate from early America, but discovering, analyzing, and interpreting the extraordinary mass of available evidence is an ongoing process.