By 1799, the Yellow Room was the most expensively furnished guest bedchamber in the house. 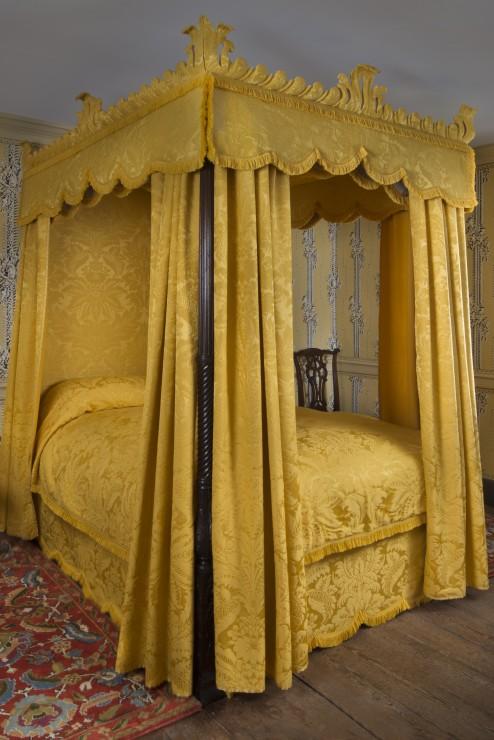 The furnishings of the Yellow Room, as well as those in the rest of the Mansion, changed many times over the course of the Washingtons’ forty year marriage.

We do not know exactly which furnishings were in the Yellow Room in the early years, but throughout the Washingtons’ occupancy, the space served as a bedchamber for visiting family and guests.

Curators chose a combination of period and reproduction furnishings to represent the original pieces, as most remain unlocated, with the significant exception of surviving elements of the original bed.

The Yellow Damask Suite of 1758

The Yellow Room housed the finest, most valuable bedstead and equipage at Mount Vernon, appraised at $85.00 on the 1800 probate inventory. (The draped bedsteads in each of the other bedchambers were appraised between $70 and $77.50.)

The high valuation of the bed equipage, taken together with the fact that yellow was the dominant colorway for the room, indicated that the yellow silk and worsted damask bedchamber suite, originally acquired by George Washington from London in 1758, most likely occupied this room by 1799.

The yellow damask-draped bedstead, as well as the accompanying furniture for a bedchamber, are detailed in the 20 August 1757 shipping invoice from merchant Richard Washington of London to George Washington.

This document guided curators in the recreation of the suite for the Yellow Room, together with the surviving material evidence. The original bedstead (on loan from the Smithsonian National Museum of American History) survives in part: 2 carved mahogany footposts and a side rail.

In addition, small fragments of the yellow silk and wool damask, incorporated into a valentine in the early twentieth century, suggested the brilliance and quality of the original upholstery.

Notably, George Washington acquired not simply a bedstead, but an entire coordinated suite of furniture. The original set included the draped bedstead, three matching window curtains, an easy chair, six mahogany side chairs and a mahogany armchair, a mahogany serpentine dressing table, a Wilton carpet, and crimson and yellow wallpaper.

The shipping invoice notes that the bedstead, curtains, and chairs had been acquired at auction, an indication that they had already been designed for and possibly used in a fashionable interior. The style and quality of the carving on the surviving posts suggest that the bedstead and furnishings were very much of the moment. In the 1750s, yellow damask was a popular choice for better and best bedchambers among the upper classes, connoting splendor and exoticism.

In one shipment then, Washington received everything he needed for a fashionable interior equivalent to those in the empire’s metropolis.

The period looking glass (English, 1750-1780) represents the “looking glass” listed on the 1800 inventory, valued at $6, less than half the value of those in the other second floor bedchambers. Accordingly, curators chose a smaller looking glass for this room. With its arched crest and scroll-cut frame, it is typical of the more modest forms available in the 18th century.

The period mahogany basin stand (English, 1750-1770) with water bottle (Chinese, 1790-1810) and wash basin (reproduction creamware) represents the “Wash stand Bason & Bottle” listed on the 1800 inventory in the room. The spare form of the stand typifies the neat and plain furnishings that the Washingtons preferred. Washington purchased a square basin stand from the Belvoir estate sale in 1774.

To represent the rest of the furnishings in the suite, period examples of “Gothic” mahogany side chairs and a “fine neat” mahogany serpentine dressing table were acquired from England. The 1800 probate inventory records six mahogany chairs in the room, but due to the space limitations created by the visitor path, only a portion of the set of the chairs is presently shown.

Carpeting was a luxury in the 18th century, and even in elite homes, bedside carpets, rather than wall-to-wall carpeting, were typical. The Washingtons’ accounts list several purchases of bedside carpets, including a set of “Persian” pattern carpets from Belvoir in 1774.

The reproduction bedside carpet in the Yellow Room, made by David Bamford, Hand Woven Carpets, UK, is based on a documented English Persian pattern carpet. In this period in England, “Persian” referred to high-quality carpets with floral designs loosely inspired by textiles from eastern Persia (now areas of Iran and Afghanistan).

Due to space constraints, only one of what would likely have been a pair of bedside carpets is displayed in the room.

A re-creation of the yellow damask-draped bedstead takes center stage in the Yellow Room, crowned with a damask-covered, carved cornice.

It is a painstaking re-creation of the most valuable bed ensemble owned by the Washingtons, originally acquired by George Washington decades earlier, in 1758, as he was expanding the Mansion and making a bid to establish himself within the ruling gentry class in colonial Virginia.

An expert team of craftspersons based each element of the Yellow Room’s reproduction bedstead on documented 18th-century examples.

In the 1750s, beds were typically hung with curtains in either a plain treatment or a swagged treatment: physical examination of the surviving original footposts ruled out the use of swagged, drapery-style curtains, as no evidence of cloak pin holes was found, indicating instead the use of plain curtains and valances hung from rods.

In the course of our research, we identified only one set of yellow damask bed hangings and valances from the period and of a household of comparable status that survived unaltered. The shape, trim, and construction details of the Mount Vernon reproduction were based on this surviving set.

The silk tape reproduces the surviving tape on a set of yellow damask bedhangings in the collection of Winterthur Museum, and the fringe represents a standard period type.

The 1757 shipping invoice specified that the bed furniture was “lind with Tammy,” a plain-weave worsted fabric, often glazed.

The reproduction bedstead is based on the surviving footposts of the original bedstead, together with the description of the frame in the original invoice.

The carved cornice is adapted from a c. 1765 carved and pierced cornice at Audley End in Essex, England. Its acanthus scrolls and gadrooning are characteristic of the exuberant carved cornices of the mid-18th century.

Harrison Higgins, Inc., Richmond, carved both the reproduction bedstead and the cornice.

Gainsborough Silk Weavers, Sudbury, England reproduced the damask fabric from a historic design in its archives.

The Yellow Room’s origins date to the initial 1734 construction of the house by Augustine Washington, George Washington’s father.