The front parlor was the room in which George and Martha Washington entertained esteemed guests during their nearly four-decade residency at Mount Vernon. 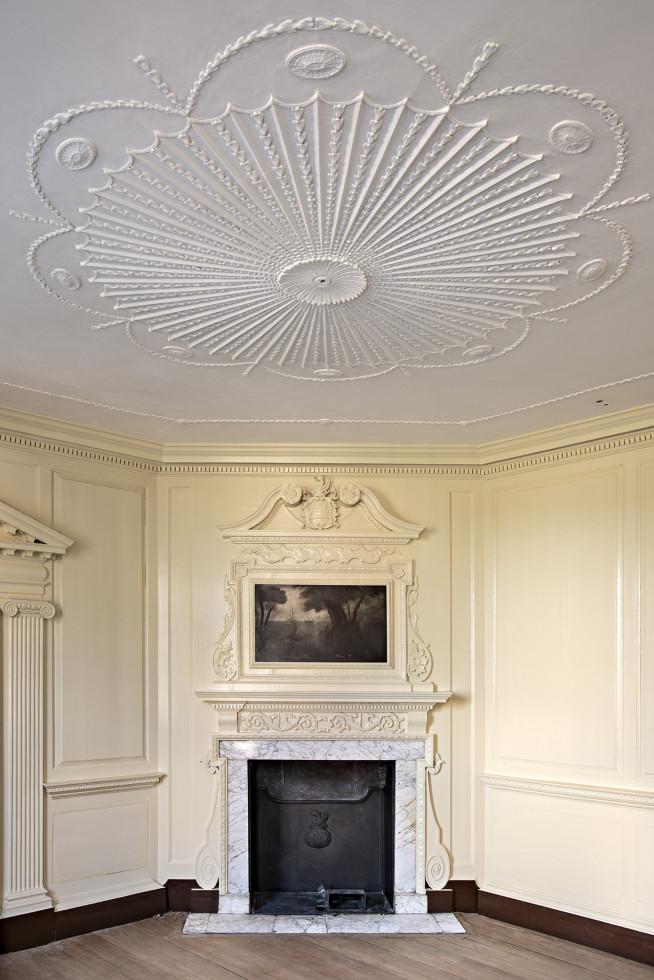 It had the most architecturally elaborate woodwork in the Mansion, featuring floor-to-ceiling wood paneling, pedimented door surrounds with classically-inspired Ionic columns, and a hand-carved chimneypiece framing a landscape painting and surmounted by the carved crest of the Washington family - specially ordered from London by a young George Washington. Even after the addition of the neoclassical New Room, the Palladian front parlor was used in concert with the New Room, creating a new suite of formal entertaining spaces.

Mount Vernon’s architecture staff conducted extensive research in preparation for the project. A rich collection of primary sources survives – from Washington papers to the papers of the Washington heirs, documents in the National Archives, and the vast archive of the Mount Vernon Ladies’ Association. This research produced nearly 550 separate documentary references to the front parlor between 1753 and 2016. The team also researched comparable rooms in other regional houses to place the front parlor in its 18th-century architectural and social context.

Building upon this foundation, the team began an in-depth physical investigation in the room, cataloging and assessing every element, from the c1760 paneling visible today to the plaster, lath, and framing members which lay hidden behind the paneling and date to the room’s earlier configurations of the 1730s and 1740s. This work, including scientific analysis of surviving historic materials, answered critical questions about the origin of the room, its development, use, alteration, and decoration over a period of 284 years.

Conservation work centered primarily on the floor-to-ceiling wood paneling and the ceiling. The buildup of generations of paint and putty had caused the large wooden panels to become stuck in their frames. The panels are reactive to their environment, expanding and contracting in response to changes in temperature and humidity. Being immobile placed the wood under extreme stress to the point of cracking. Several of the panels were removed and underwent a humidification treatment to address warping and cracking and have since been reinstalled in their original locations.

The removal of some of the Washington-era panels yielded an unexpected discovery. Found behind the wooden panels was an earlier generation of paneling, but this paneling was not made of wood – instead, it was composed of molded and painted plaster. Plaster paneling was rare in the 18th century Chesapeake region because it was an expensive and labor intensive finish. The discovery of the plaster paneling demonstrates that even before George Washington’s residence, the house was no ordinary farm house, and this room was clearly the most important space in the house from the earliest times.

The decorative plaster ceiling, which dates to a 1780s update of the room, was assessed and conserved, receiving several coats of whitewash based upon 18th-century recipes.

The final step of the architectural work was the repainting of the woodwork in a light stone or cream color, using handmade, linseed oil paint that replicates the paint used in 1797, when the Washingtons redecorated the entire house after the presidency. Microscopic analysis identified 15 generations of paint that had been applied to the room since the 1750s. The use of a light stone - highly fashionable in the time of the new republic - is part of a continuum of color unifying the suite of public rooms that were the center of the Washingtons' social life.

Guests were led from the Mansion’s central passage into the front parlor, a principal entertaining space, and finally into the large New Room, which served as a picture gallery with room enough for dancing or hosting large dinner parties. The neutrality of the stone color in the front parlor highlights the room’s elaborately-carved woodwork and will serve as a fitting backdrop for the rich blue textiles, elaborate lighting elements, and personal family portraiture that fill the space.

The combination of documentary research and physical investigation uncovered evidence that has allowed this front parlor restoration to be the most accurate in the MVLA’s history, returning elements like the paint color and the replica sash cord. Mount Vernon’s architecture team was also able to develop a greater understanding of the house’s evolution, and the front parlor in particular.

The house as built by George Washington’s father, Augustine, and altered by his brother, Lawrence, reveals the effort of the family to showcase their ascendant status in Virginia society. While the footprint of the room has largely remained unchanged, behind the visible George Washington-era wood paneling is an early molded plaster paneled wall surface - an example of a higher level of finish in the early house that is comparable to examples that can be found in contemporary prosperous houses in England and in the Chesapeake region later in the century. Throughout George and Martha Washington’s four-decade residence, the room endured as the core of Mount Vernon’s entertaining spaces and continues to provide a window into their lives and legacies.