One of the most exciting and intensively-studied discoveries during the front parlor restoration project was that the color on the room’s woodwork was conclusively not blue during the Washingtons’ lifetimes, but a stone or cream color. 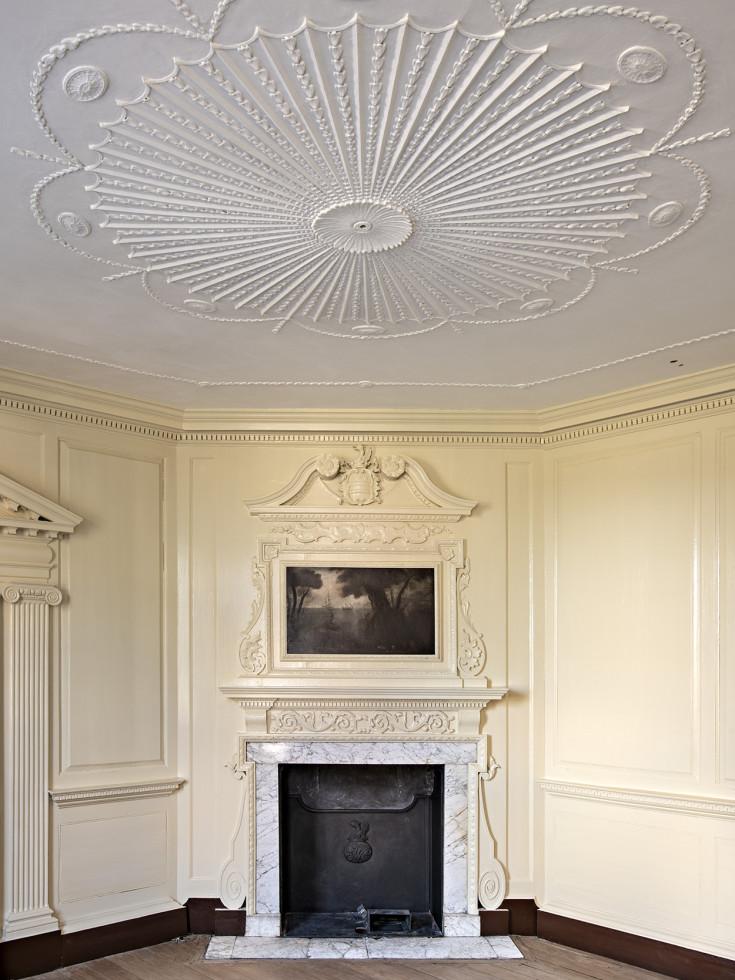 Part of the process is considering the state of knowledge available when the last restoration was completed. We perform beginning-to-end research and investigation, but we also reconsider the work of previous generations. Sometimes previous conclusions are reinforced, but sometimes we reach a different conclusion. In 1980, the last time that the room was restored, it was decided to paint the room blue. So, during the recent front parlor project, an important research question centered on the paint color, “What is the likelihood that the room was painted blue during the Washingtons’ lifetimes?”

With our research question in mind, in 2015, 2016, and 2017, paint samples were extracted from the front parlor woodwork. Using microscopy, or examination under a high-powered microscope, 15 paint layers were identified in the most complete paint samples. (A set of successive paint layers is also referred to as a stratigraphy). In addition, some of the samples were tested for the presence of zinc-white, a pigment found in paints only after 1845. In tandem with the sampling, in-depth documentary research was conducted in order to identify all references related to the room, including paint campaigns. Finally, physical investigation of the panels that were temporarily removed for repair was performed.

The last time that a full-scale restoration was done in the Front Parlor was 1980, at which time it was painted blue. One primary driver of that color choice was documentary interpretation; citing one 1796 letter from William Pearce to George Washington that referenced Washington’s “blue parlour,” for which he was ordering a blue carpet, it was thought that the color referenced the walls. In addition, it was posited that Washington painted the room only twice during his lifetime, once when the paneling was installed circa 1758 and once around the period when the ceiling ornament was installed, between 1784-1787. The 1980 paint analysis, which was a new technology, identified only seven paint layers – compared to the 15 layers found during recent paint sampling. The second layer in the 1980 stratigraphy was blue, which seemed to reinforce the theory about the two paint campaigns. Thus, the room was painted blue.

A different conclusion, however, was reached based upon the synthesis of the 2015-2017 paint sampling, documentary research, and physical investigation. More advanced technology not only identified more paint layers, but the updated stratigraphy revealed that there were actually five layers prior to the presence of blue. So, the first instance of blue came in at layer six. The majority of these pre-blue layers were variations of a stone color. While the first four layers contained chemical components consistent with early coatings, zinc-white was found for the first time in layer five, which meant that layer six certainly post-dated 1845.

From a documentary perspective, between 1775 and 1797, there were eight references to either the presence of blue in the front parlor, the blue carpet that was ordered for the room, or the blue furniture that found a home there (including the 1796 reference cited in 1980). Seven of the eight references associated the color blue with the carpet or furniture, but never the wall color. The remaining reference did not specifically mention the furnishings or wall color. (There were many other 18th-century references to the room, but they did not mention color.) Further, documents suggest that the room was likely painted three, if not four, times during the Washingtons’ residence. At the very least, it would have been painted when the wood paneling was first installed circa 1760, in the late-1780s when the ceiling ornament was installed and in 1797 when the entire house underwent a refresh; it is also possible that it was painted again during the mid-1770s after alterations to the paneling. Thus, the evidence precluded blue as the 1799 wall color.

Fast forwarding to 1869, this year marked a watershed in terms of paint, as the first wave of significant preservation work inside the Mansion was undertaken by the Mount Vernon Ladies’ Association. Until recently, little was known about the specifics of this work. However, detailed records in the National Archives about the 1869 work were located, and these records were corroborated by early correspondence from members of the MVLA. These sources suggested that the front parlor was painted blue in 1869. An 1877 article was also found in The Building News and Engineering Journal explicitly noting a blue wall color at that time.

Further, the MVLA kept detailed records on the room’s first full-scale restoration in 1879, which was the next time the room was painted after the 1869 work. The paint scheme was described as being of a “soft tint.” In the recent stratigraphy, the layers of paint immediately following the blue were a pinkish-cream primer followed by a tannish-gray. Thus, the combination of the documentary evidence and the paint samples, including the zinc-white discovery, supported the theory of 19th-century blue followed immediately by lighter, softer tones (of pink and gray) associated with the 1879 restoration.

Taking all of this evidence into account, as well as information that allowed for the dating of each of the subsequent layers (through 1980), it became clear that the paint color at the end of the 18th-century was a stone color, consistent with prior interpretations of the space, and that the blue paint was a post-Washington color. As such, the recommendation was made to return the 18th-century stone color to the room. The color not only highlights the room’s elaborately-carved woodwork, but it also frames the over mantel painting and serves as a fitting canvas for the room’s artwork and blue furnishings. 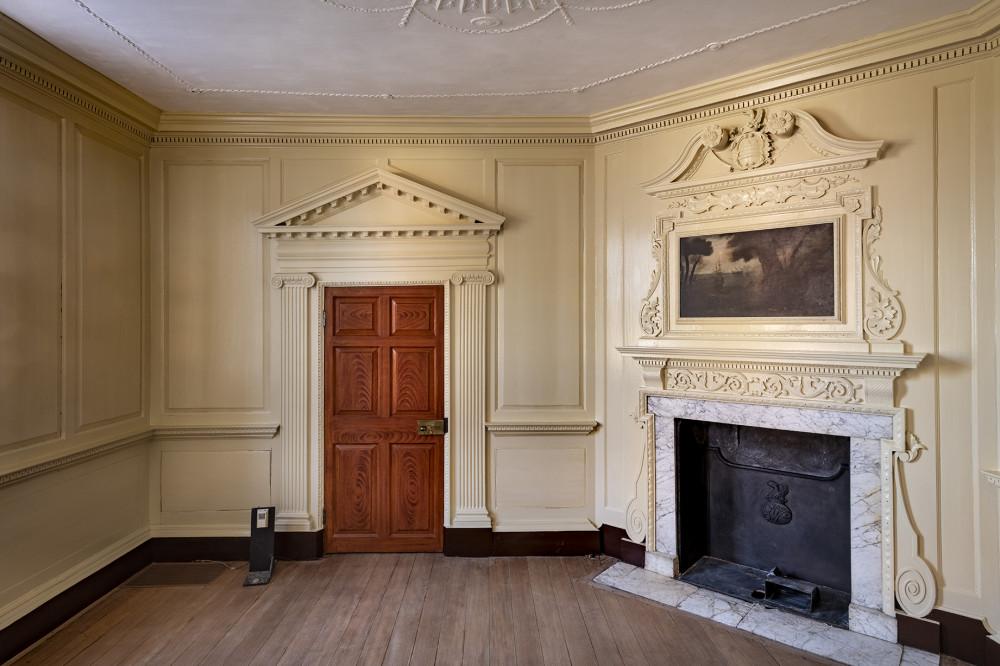 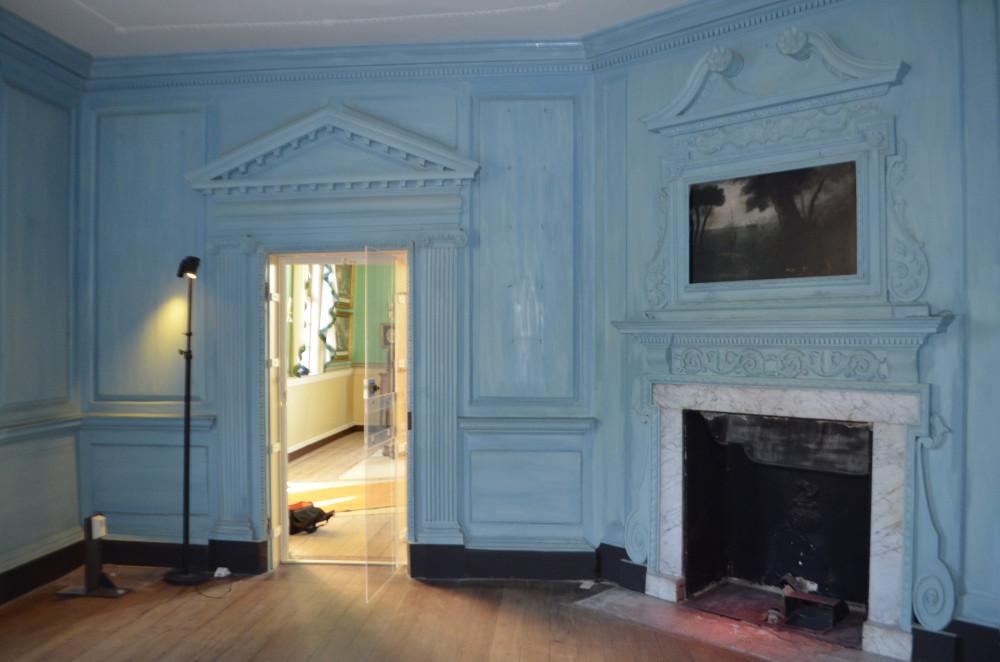 Paint changes made to the front parlor based on recent paint analysis.

The architecture team has found that it wasn’t just the front parlor woodwork that was painted a stone color; similar conclusions have been reached during recent projects in the New Room, Chintz room, blue room and central passage. The use of a light stone color is not without precedent – it was highly fashionable in the time of the new republic, not only in America but in England as well. This design sensibility precipitated recent paint color changes at Williamsburg’s Governor’s Palace as well. In the case of Mount Vernon, it is part of a continuum of color that unifies the suite of public rooms that were the center of the Washingtons’ social life, leading guests from the Mansion’s central passage into the front parlor, a principal entertaining space, and finally into the large New Room, which served as a picture gallery with room enough for dancing or hosting large dinner parties.

We are eager to see what updated paint sampling and research yields for upcoming restoration projects.

The space had the most architecturally elaborate woodwork in the Mansion, featuring floor-to-ceiling wood paneling, pedimented door surrounds with classically-inspired Ionic columns, and a hand-carved chimneypiece framing a landscape painting and surmounted by the carved crest of the Washington family.