After more than two years of intense forensic investigations, documentary and material culture research, conservation, and restoration, one of Mount Vernon’s major bedchambers, the Chintz Room, is now on view. 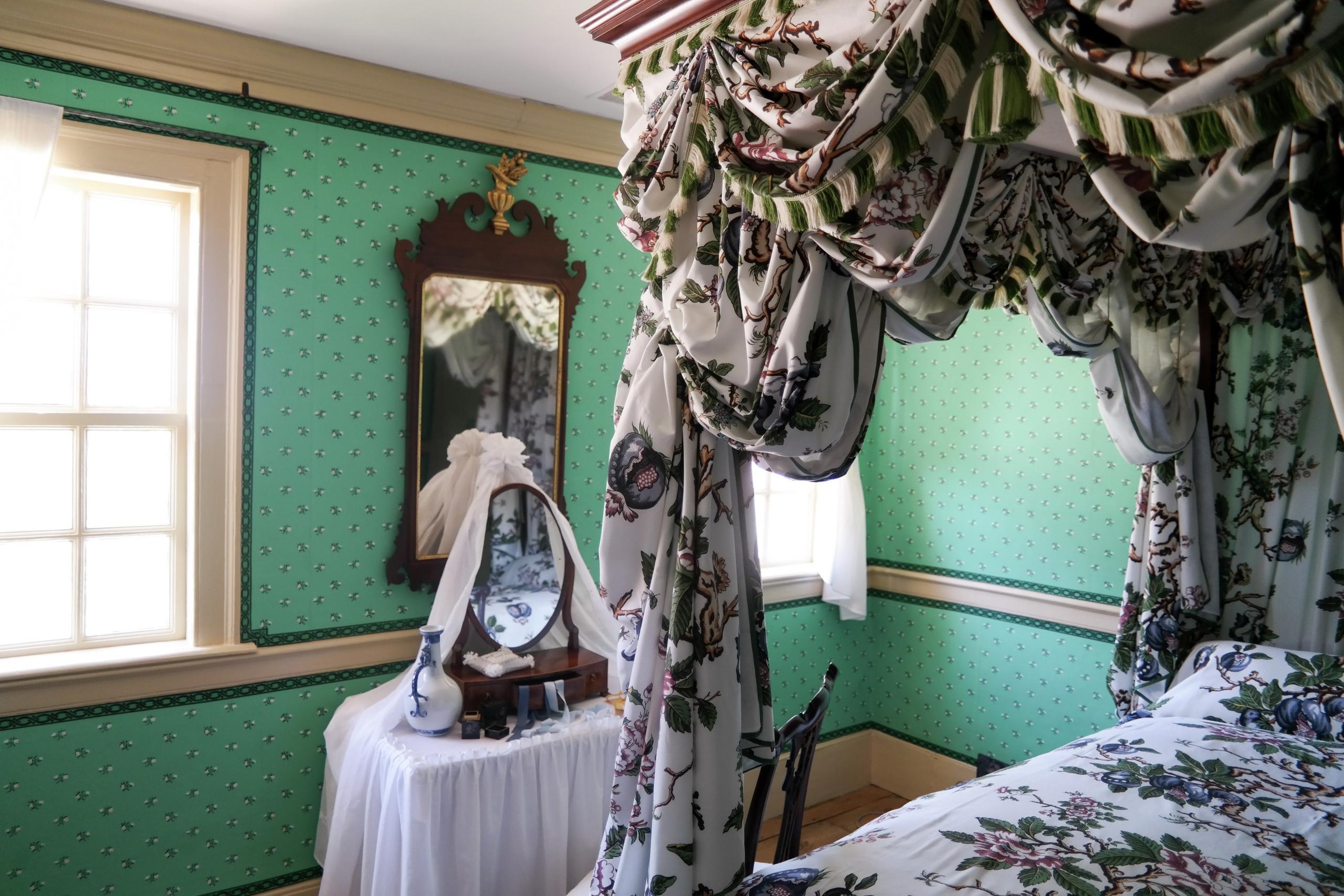 The restoration of the Chintz Room was a collaborative effort, in which Mount Vernon staff consulted with more than 40 museum curators, conservators, and professional craftsmen to accurately interpret the full body of evidence for this space. In the process — even as we sought to accurately reflect the room’s use and purpose in 1799 — we discovered more about the early history of the mansion, Revolutionary legends, and eighteenth-century fads, than we ever anticipated.

Understanding how the Washingtons and their household knew and used this room began with identifying the name they gave it. A diligent search of George and Martha Washington’s papers revealed that they rarely referred to any of the second-floor bedchambers by name, but three key documents offered three different names for this space. A 1796 memo written by Washington’s farm manager, William Pearce, while the family was living in Philadelphia, described it simply but precisely as the “the room over the small dining room.” The inventory taken after George Washington’s death in 1800 listed it as the “Fourth Room” encountered by the appraisers on that floor. But the inventory taken after Martha Washington’s death in 1802 provided a more descriptive sobriquet, calling it the “Chintz Room.”

Although this inventory was taken two years after George Washington’s death, knowing that the contents of each room in the house remained almost identical to the 1800 inventory, and that the appraisers of the 1802 inventory were family members and close friends, both suggested that “Chintz Room” would have been a name used by the Washingtons during their lifetimes. 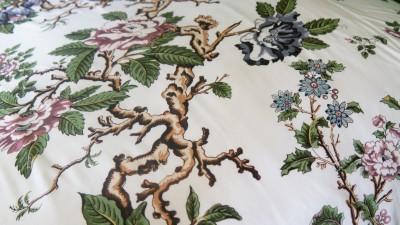 The term “chintz” was broadly applied to colorful hand-painted, printed, and dyed cottons from India — or English printed cottons that imitated such designs, and Chintz rooms showcased bedsteads hung with these newly fashionable textiles.

Chintz rooms reached their height of popularity in the 1760s and 1770s. Washington may have been one of the early adopters of the trend in colonial Virginia, having received “Chintz” wallpaper for his second-floor bedchambers in 1758. With the creation of the Chintz Room at Mount Vernon, the Washingtons conjured up rococo fantasies of Asian wealth and splendor and, simultaneously, identified themselves with England’s fashionable elite.

At the outset of the project, we launched a reexamination of the finishes not only in the Chintz Room, but throughout the second floor rooms, in order to gain a comprehensive look at the changes made in this area of the mansion over time. Conservator and analyst Susan Buck took more than 90 samples of paint and plaster.

In the Chintz Room, five layers of paint were found on the woodwork trim dating to 1759–1799. While the woodwork had been painted a light blue-green c. 1759 that was replaced with a light cream color by the mid-1770s, and continued to be repainted in similar tones through the end of the century. The change was indicative of the Washingtons’ desire to keep up with fashionable taste, and strongly suggested that the Washingtons continued to update the room with wallpaper as well. During the late 18th century in the Chesapeake region, cream-colored trim was frequently chosen to frame vividly colored papered rooms.

Failing plaster on the east wall, which separates the Chintz Room from the Yellow Room, serendipitously presented an opportunity to look further back into the history of the room’s construction. Preservation staff carefully removed the modern c. 1912 plaster from the wall to take a closer look at the structure underneath. As they started to pull out the plaster in the corner where the east wall joined the chimneybreast, they made a remarkable find: fragments of very early plaster with bits of blue painted wallpaper still left in place.

Susan Buck returned to analyze the pigments on the paper fragments and related paint evidence on the mantel. Her findings confirmed that the paper was from the first period installation (c.1759) in the room, and that it had been covered over by plaster repair carried out just a few years later. Small as the fragments were, they retained just enough information to indicate the type of pattern: a floral design with undulating, sinuous outlines in black — an English-produced chintz.

The Chintz Room Before 1799

We were elated to find the first generation paper in the room, but we knew that this paper would not have remained in place in 1799, the year we strive to portray. In addition to the evidence for the early plaster repair, alterations to the south wall, c. 1775, would have necessitated repapering the room. The documentary record suggests that the room may have been repapered during the major renovation periods in the mid-1780s and in the late 1790s.

For the reproduction paper used to furnish the Chintz Room, curatorial staff chose a sprig pattern paper (having small-scale, repeating floral motifs), a type that was highly popular for bedchambers in the 1790s. The pattern, Berrien House Sprig, is produced and sold by Adelphi Paperhangings based on original wallpaper found in Savannah, Georgia’s John Berrien House, c. 1791. Another fragment of wallpaper, found some years ago below the floorboards of Mount Vernon’s Chintz Room, provided the reference point for the ground color of the paper: a bright verditer green, only slightly different from the shade found in the New Room. 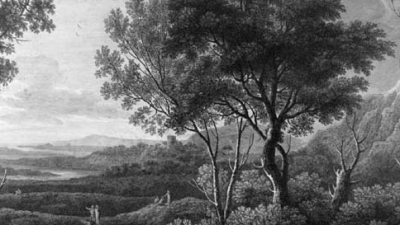 Artwork in the Chintz Room

The 1800 inventory taken after George Washington’s death names the five prints that were hung in the Chintz Room.

Few of the original furnishings from the Chintz Room survive, but the rich documentary evidence from account books, letters, and probate inventories, combined with the physical evidence from the room, enabled curators to select period and reproduction furnishings similar to those that would have been used by George and Martha Washington. In the past, curators were not able to locate examples of all of the furnishings listed on the probate inventories. Now, for the first time, visitors can see the room fully furnished, with all contents from the 1800 inventory represented.

In the course of George and Martha Washington’s forty years of residence at Mount Vernon, the Chintz Room housed a wide variety of occupants. Tradition states that Eleanor (Nelly) Parke Custis Lewis, or Mrs. Lewis (as she would have been known to all but her most intimate friends after her 1799 marriage) used this space, and the evidence does suggest that this may have been used by her as a newly-married woman and mother in late 1799 and early 1800, particularly following the birth of Frances Parke Lewis that November.

Architectural features such as the closet, providing extra storage space, and the bell pull, giving the ability to summon assistance from an enslaved attendant, would have fitted it to Mrs. Lewis’s needs as a new mother. The furnishings listed in this space on the 1800 inventory also indicate a female occupant. These included a pine dressing table, a form used exclusively by women in the period, and a close chair, an arm chair or easy chair with a removable chamber pot, which would have been ideal for a convalescent. This last evidence corresponds with a visitor’s account of the second-floor “apartment” occupied by Mrs. Lewis noting that an armchair had been carried upstairs for her use.

The Early Architectural Life of the Chintz Room