Paint analysis combines a microscopic examination of paint samples and document-based research to determine when successive layers of paint were added to a surface. 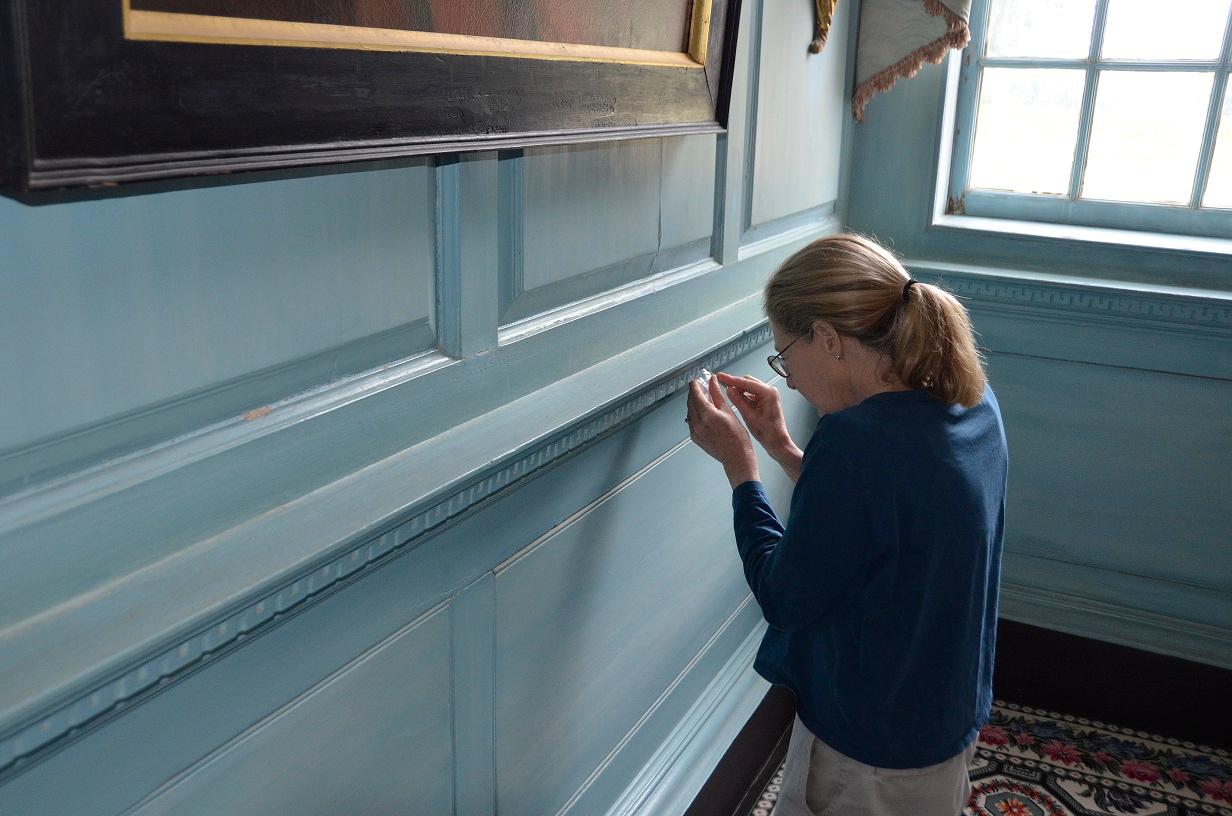 The question of what color to paint each room in the Mansion has been asked since the Mount Vernon Ladies’ Association (MVLA) bought the property. In the 1860s, Ann Pamela Cunningham and the Vice Regents discussed at length what color the “Banquetting Hall,” now known as the New Room, should be painted. Sarah Tracy, Cunningham’s secretary, described their dilemma:

It seems impossible to reach the color of the Room in Genl W’s day—& the question now is, whether the Assn desires to be bound by the coloring used by Judge [Bushrod] Washington—or—in absence of known shades of Gen. W.— consider itself at liberty to use the shades best calculated to set off the rooms to advantage—a pink shade to the Banquetting room would be far more beautiful than the most delicate lemon …1

Since those early days, the MVLA resolved that the goal is to best represent the rooms (and the estate at large) as they were at the time of George Washington’s death. As early as the 1930s, primitive forms of paint analysis were performed, primarily scrape tests combined with visual inspection. This approach often revealed a color, but it failed to account for the fading of pigment, or the yellowing caused by the aging of the linseed oil used as a binder. This led to the belief that early paints lacked vibrancy.

A large-scale paint study was undertaken at Mount Vernon in the early 1980s, using an early version of microscopy, or examination of samples under a microscope. At the time, this was groundbreaking work, as it identified the actual pigments used in the paints. Based on the findings, the paint colors used in restorations became brighter, using vibrant pigments like Prussian blue and verdigris. Given changes in technology over 30 plus years that allow for a much more precise analysis, Mount Vernon began to update the paint sampling and analysis in the early-2000s. Recent analysis has identified far more paint layers than the 1980s study, and, when combined with documentary research, it has led to some dramatic changes in paint colors.2 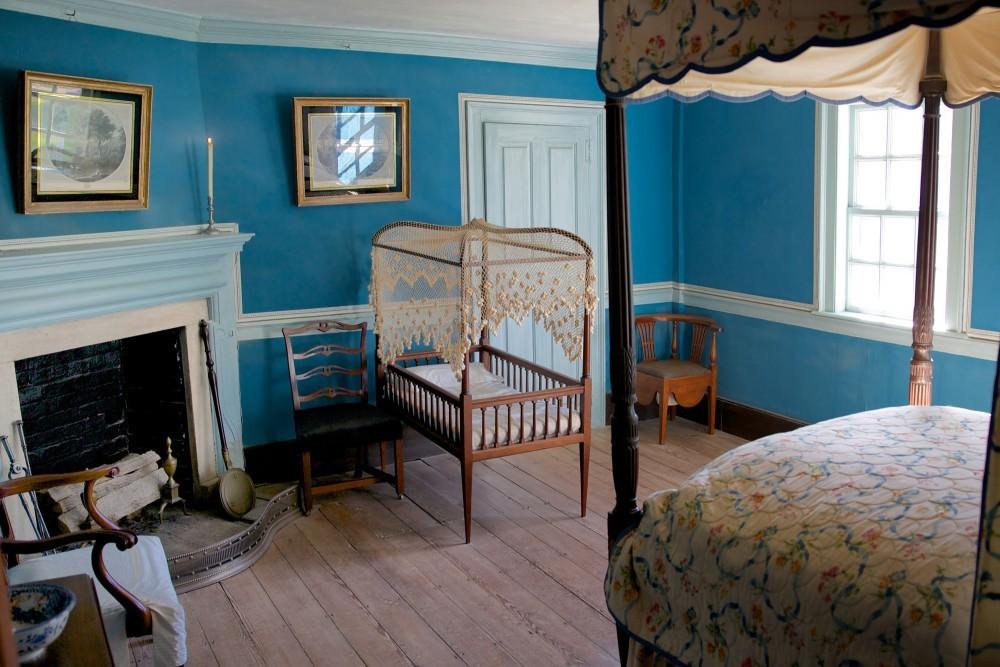 Changes made to the Chintz Room based on recent paint analysis.

The method of paint sampling that Mount Vernon currently employs entails making small shallow excavations (about one-quarter inch in diameter) in a painted surface with a microscalpel. This essentially removes a sliver that contains all of the accumulated paint layers down to the wood. These excavations are then examined under 30X magnification to determine whether they contain the full scope of accumulated paint layers.3

Portions of each sample are cast into polyester resin cubes for cross-section analysis. The cross-section analysis reveals the individual paint layers, which almost look like layers of a cake. The uncast remainders are saved for review and testing under a 45X binocular microscope. The samples are then photographed under visible and ultraviolet light at 50X, 125X, and 250X magnifications.4

Microscopically, each layer of paint has distinctive, identifiable characteristics that can assist in dating. Some of these characteristics include pigment type, size, dispersion and composition, fillers and binder type. There are even variables like the amount of weathering and degradation, or the amount of dirt that has collected on a painted surface, that can aid in establishing relative dating.5

For example, a significant accumulation of dirt on top of a substrate or paint layer indicates that a fair amount of time passed before a subsequent paint layer was applied. Or, if a layer contains zinc oxide (which replaced the more toxic white lead contained in early paints), it must post-date 1845, when paint containing this component became commercially available in the United States. Or, certainly, a latex paint could not have been applied during the 18th century, as it did not come into use until the 1940s. 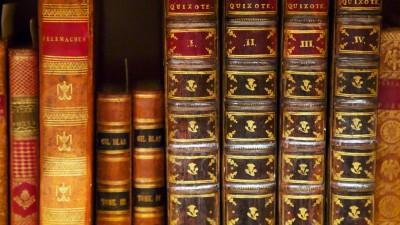 In concert with the microscopic examination results, Mount Vernon’s team performs research to determine if documentary evidence exists that speaks to the timing of paint campaigns. Or, even better, the year or time period a particular color was applied. In some cases, records clearly indicate the date that new paint was applied in a specific space. In other cases, clues allow for a time period or relative sequence to be identified. The recent front parlor restoration illustrates all of these scenarios.

Paint samples from the Front Parlor identified blue paint at layers six and seven in the paint stratigraphy. These two layers were preceded by several layers of cream colored, oil paint and followed by a layer of pinkish cream paint.

An 1877 magazine article noted that the room was painted blue at that time. The documentary records of the 1879 room restoration also confirmed that the paint applied at that time was changed to a light color.

Therefore, the combination of paint analysis and research allowed for the dating of layer seven (blue) as circa 1877 and layer eight (pinkish cream) as 1879. By extension, layer six (light blue-gray) could not have dated to the 18th century as it would have had to be on the walls for multiple decades, but there was not a significant accumulation of dirt on top of it.

Further, the first layer could be dated alongside the installation of the wood paneling between 1758 and the early-1760s. After that initial painting, there was documentary evidence for three more paint campaigns before Washington died in 1799.

Thus, by both backing into and building up to the stratigraphy sequence, one of the early cream layers could be firmly identified as the 1790s paint color (as was suspected in the 1930s sampling).