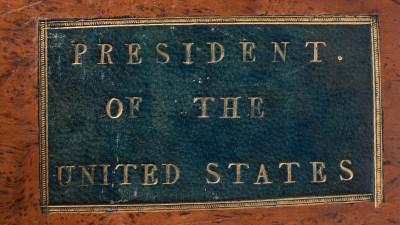 One of the early responsibilities of the Congress' official printer was to prepare bound copies of the?

One of the early responsibilities of the Congress' official printer was to prepare bound copies of the?

In 1790 George Washington received the key to the Bastille prison from an appreciative Marquis de Lafayette. It remains at Mount Vernon to this day.

Between 1772 and 1798, twenty-four artists painted George Washington. Charles Willson Peale was the first?

The wide array of ceramics and Chinese porcelains that made their way to George Washington's residence at Mount Vernon were a testament not only to his own personal taste but also reflected a popular fashion among the American elite. Elegantly furnished dining and tea tables were common among the aristocracy in eighteenth-century England and France, and prosperous Americans eagerly imported similar luxury goods both before and after the Revolution.

The Chippendale side chair was one of the fourteen plain mahogany side chairs that George Washington used in New York City.

George Washington spent the summer of 1787 in Philadelphia presiding over the Federal Convention that?

George Washington suffered from poor dental health throughout his adulthood; beginning in his twenties he experienced regular toothaches, decay, and tooth loss.

In 1780, about seventy miles north of New York City in Orange County, New York, some strange bones and teeth were discovered by a ditch digger on the farm of the Reverend Robert Annan.  General George Washington and the Continental Army were in winter quarters nearby and word of the discovery reached Washington; his curiosity aroused, he gathered some officers and took a sleigh ride to see the bones for himself.  Robert Annan wrote an account of Washington’s visit revealing that Washington owned a strange tooth: “He told me, he had in his house a grinder which was found on the Ohio [River]”1      Washington’s grinder was the tooth of an unknown animal collected from Big Bone Lick near the Ohio River in Kentucky.

The Bull-Finch is a songster, that is, a bound collection of lyrics to songs without musical notation of their melodies and Mount Vernon's copy is inscribed "Martha Washington 1759" on the title page in George Washington's handwriting.

The Washington Monument is a 555-foot-tall obelisk honoring George Washington on the National Mall in Washington, D.C. operated by the National Park Service. Proposed in the year 1800 and begun in 1848, it was not opened to the public until 1888.

George Washington's watermark featured a central figure of Liberty leaning on a plow, holding a liberty?

Writing in the 18th Century New