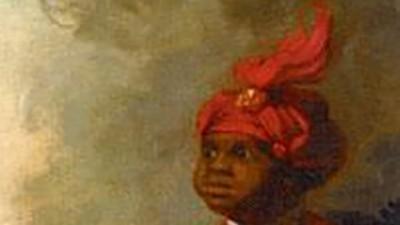 Austin was an enslaved man whose labor benefited the Washington family.

Ben was a widower with three small children at the time of the 1799 census of enslaved people at Mount Vernon.

Betty, who was enslaved at George Washington's Mount Vernon, was described as being a "labouring woman" who worked at the Ferry Farm in 1786, though in 1799 she served as a cook.

Caesar was a field worker on Mount Vernon’s Union Farm. He was literate and preached to the local black population.

Caroline Branham was the mother of eight, wife of Peter Hardiman, and enslaved housemaid at Mount Vernon.

Census of the Enslaved Population at Mount Vernon, 1786 and 1799 New

In February 1786, George Washington created a list of the enslaved people working in his service at Mount Vernon. He listed their location on the estate, work assignment, sex, and age. Washington also indicated status of ownership - whether the enslaved people were his own property, dower slaves belonging to the Custis family, or laborers rented from nearby plantations. He repeated this process again in June 1799, creating another equally detailed slave census.

Charles was enslaved at Mount Vernon where he worked as a ditcher at the Mansion House and was married to Fanny.

Charlotte was an enslaved seamstress at Mount Vernon who sometimes worked in the mansion.

Christopher Sheels was born in 1776, the second child of Alce (likely pronounced “Al-sie”), a spinner at Mansion House Farm.

In 1799, Davy Gray was about 56 years old and enslaved. Washington described him as “mulatto,” meaning that he was mixed race. He worked as an overseer on Mount Vernon’s outlying farms.

Dick Jasper was described as a "labouring man" in the list of enslaved people at Mount Vernon Washington compiled in 1786.

Doll was among the more than 80 enslaved people whom Martha Dandridge Custis brought to her marriage to George Washington. She worked as the Mount Vernon estate's cook for many years.

Edmund Parker worked for the Mount Vernon Ladies’ Association as the guard at Washington’s tomb. Years earlier, he had been enslaved on the estate.

In 1786, Edy is noted as being thirteen years of age and denoted as being one of the "labouring women." Edy was married to Davy, a carpenter who worked at the Mansion House Farm, and was most likely the daughter of Flora.

One of the earliest descriptions of the enslaved burial ground at Mount Vernon came from the journal of Caroline?

Fanny was a "labouring woman" who worked at Ferry Farm (later known as Union Farm).

Frank Lee arrived at Mount Vernon in 1768 after George Washington purchased him.

The week of August 12, 1798, was a sweltering one at Mount Vernon. The mercury of Washington’s thermometer flirted with ninety degrees nearly every day. Ominous clouds roiled the sky each afternoon, but fitful rain showers did little to break the heat. Despite the oppressive conditions, business continued as usual among Mount Vernon’s enslaved workers, including the three gardeners: George, Harry, and Joseph.1

George Washington's views on the subject of slavery shifted over the course of his life.

In November 1790, George Washington enclosed a thin strip of paper in a letter to his secretary Tobias Lear, who was setting up the new presidential household in Philadelphia. On it Washington wrote, “The whole length of this paper is the circumference of Giles cap measured at the bottom and on the inside . . . being the exact Band of the head. . . . To the black line drawn across the paper is the size of Paris’s cap.”

The Gradual Abolition Act of 1780, the first extensive abolition legislation in the western hemisphere, passed the Pennsylvania General Assembly on March 1, 1780. To appease slave owners, the act gradually emancipated slaves without making slavery immediately illegal. The act permitted Pennsylvania slaveholders to keep the slaves they already owned unless they failed to register them annually. At the same time, the act provided for the eventual freedom of individuals who were newly born into slavery.

Hercules, a member of the Mount Vernon enslaved community, became widely admired for his culinary skills?

Most of the slaves that inhabited the Mansion House Farm lived in the House for Families (built by the?

By 1799 most of the enslaved individuals at Mount Vernon were second or third generation Americans. Some?

n Sunday, April 1, 1792, at Mount Vernon’s Muddy Hole Farm, an enslaved boy named William felt a sharp pain in his back. Two days later, the twelve-year-old fell ill, becoming “senseless and speechless.” The boy’s mother, a field-worker named Kate, spent a week caring for him in the family’s small cabin.

Kitty was assigned to work as a dairy maid and a spinner.

In the closing days of the American Revolution, the Marquis de Lafayette wrote his old commander George?

Nancy was eleven years old in 1799, when George Washington made a list of all the enslaved people on his plantation. Two years later she was freed.

"A large Virginia estate," wrote Washington Irving in his biography of George Washington, "was a little?

In early July 1798 at Dogue Run Farm, thirty-five-year-old Priscilla gave birth to Christopher, her sixth living child.1 She did not resume working in the fields until five weeks later. Priscilla’s husband and Christopher’s father, Joe, was likely unable to see much of his newborn son. Like many enslave

Enslaved persons at Mount Vernon found a variety of ways to fill their time off from work.

The man who came to eventually be known as Sambo Anderson worked as a slave carpenter at Mount Vernon?

In 1797, George Washington wrote to farm manager James Anderson in regards to clothing his slaves that?

In addition to having overseers monitoring work on site, George Washington utilized a number of methods?

According to George Washington's slave inventory, there were eighty-seven slaves on the Mansion House?

The Mount Vernon estate was divided into five separate farms, each of which was managed by an overseer who was either a hired free, white male, or one of George Washington's African slaves. These overseers were often supervised by a farm manager who reported to Washington on a weekly basis.

In many ways the Mount Vernon estate was comprised of several small African-American villages, presided?

Slaves working on the Mount Vernon plantation practiced a variety of religious traditions and experiences?

The enslaved population at Mount Vernon did not meekly accept their bonded lot in life. Many resisted?

A census of the slaves at Mount Vernon made the summer before George Washington's death indicated that?

At Mount Vernon the numbers of males and females in the slave population were fairly equal. A series?

There were forty-five slaves living on Dogue Run Farm in 1799, the last year of George Washington's life. Twenty-seven of these individuals were owned by George Washington, with the remaining eighteen being dower slaves owned by Martha Washington.

According to the 1799 slave inventory taken at Mount Vernon, there were eighty-seven slaves on the Mansion House Farm in the summer of 1799.

There were forty-two slaves living at Muddy Hole Farm in 1799, including thirty-six owned by George Washington, five who were Custis estate dower slaves owned by Martha Washington, and one man who was rented from Mrs. French, one of the Washington's neighbors.

There were fifty-seven slaves living on River Farm in 1799, of whom twenty-seven were owned by George Washington.

The following information is based on the 1799 slave list compiled at Mount Vernon. In 1799 there were seventy-five slaves living at Union Farm.

Status of Slaves in Washington's Will

On July 2, 1766, the schooner Swift lay anchored in the Potomac River awaiting a trading voyage to the Caribbean. Below deck, an enslaved man named Tom sat in handcuffs. A foreman on Mount Vernon’s River Farm, Tom had been inherited by George Washington from his elder half-brother Lawrence in 1754. Twelve years later, the enslaved man made a failed attempt to flee the plantation. In a letter to Joseph Thompson, captain of the Swift, Washington declared Tom a “rogue and a runaway” and directed that he be sold in the West Indies. Washington commented that Tom was “exceedingly healthy, strong, and good at the Hoe,” and “he may . . . sell well, if kept clean and trim’d up a little.”1

William Lee arrived at Mount Vernon in 1768, after George Washington purchased him from Mary Lee, a wealthy Virginia widow, for £61.15s.1 Washington also bought William's younger brother Frank, who went on to serve as a waiter and butler in the household.