Wills Creek, later incorporated as Cumberland, Maryland, had recurring significance for George Washington between 1753 and 1794. At Wills Creek, Washington witnessed the construction of Fort Cumberland in 1754, commenced and concluded the ill-fated march of General Edward Braddock in 1755, and reviewed militiamen during the Whiskey Rebellion of 1794. The setting played a considerable role in the beginning and end of his military career.

Wills Creek encompasses the area immediately surrounding the confluence of Wills Creek, a tributary of the North Branch of the Potomac River that flows through Maryland and Pennsylvania. It was the site of a Shawnee Indian settlement in the second half of the seventeenth century. The area attained its name from European settlers, who referred to the land in honor of the Christian name they gave to a Shawnee Indian man, Will, who had considerable land claims around the creek during the first few decades of the eighteenth century. Generally speaking, Will shared an amiable relationship with the settlers. However, by Washington's time, Wills Creek was primarily inhabited by only a handful of European settlers.1

Washington first visited Wills Creek in November 1753 as a Major in the British Army. He was sent to the area as part of a mission to deliver an order of withdrawal to the French Commandant at Fort LeBoeuf, located near the Forks of the Ohio in present day Waterford, Pennsylvania. After the French refused to vacate the British-claimed territory, Washington returned to Wills Creek as a Lieutenant Colonel several times in 1754. In September of that year, Robert Dinwiddie, Lieutenant Governor of the Colony of Virginia, ordered Washington to "march to Wills's Creek, to join the other Forces in executing such Orders as I may see proper to direct."2 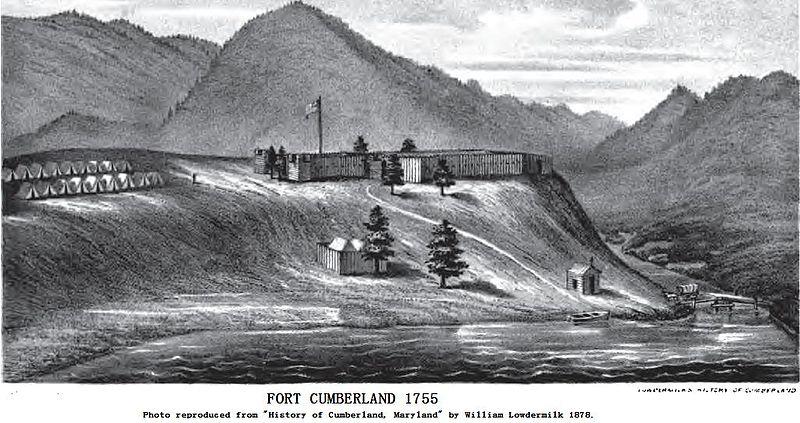 Dinwiddie further requested that an advanced staging area be constructed at Wills Creek in anticipation of conflicts with the French over frontier territory; that structure was named Fort Cumberland. Overall, the fort was a rather shoddy structure. Guarded only by several four-pounder cannons, it occupied about forty square yards. The limited space required that soldiers sleep in shelters outside of the fort itself, leaving them highly susceptible to ambush. However, the geographical location of Wills Creek made it an ideal point to ready troops before advancing deeper into the frontier.

In 1755, British General Edward Braddock arrived in the colonies to confront the French over their refusal to surrender the Ohio Valley. After preparing his troops in Alexandria, Virginia, Braddock led a force of around two thousand soldiers to Fort Cumberland. From there, Braddock planned to march to Fort Duquesne (today Pittsburgh, Pennsylvania) and force a French withdrawal. The full expeditionary force arrived in Wills Creek by May 10. Washington, who was appointed to serve as Braddock's aide-de-camp, was among them.

After nearly a month of preparation and forest clearing, the full force set out around June 10. The march proved disastrous, as combined forces that included the French, Ottawas, Miamis, Hurons, Delawares, Shawnees and Mingoes engaged the British in a surprise attack at the Battle of the Monongahela in Southwestern Pennsylvania. At the end of the skirmish, scores of men were left injured or dead. Braddock, who was mortally wounded, was unable to command the force of 1,400 redcoats. In his stead, Washington took control of the situation and organized the retreat of the survivors back to Fort Cumberland at Wills Creek. Only around a third of the men returned unharmed. Given the area's remoteness, Washington recommended to his superiors that Fort Cumberland be abandoned. Lt. Governor Dinwiddie consented, and the area was left inhabited by only a small settler community.

Washington did not return to Wills Creek for nearly two decades. In September 1784, he was accompanied on a trip to view his western landholdings by three others, including his friend Dr. James Craik, who served under Washington as Physician General of the Army. Craik was present with Washington at Braddock’s Defeat several decades earlier. Washington did not record a detailed account of the trip in his personal writings, though he did comment on spending some time along "the Waters of Wills Creek which extends up the Mountain (Alligany) two or three Miles as the road goes."3

In 1787, Wills Creek was formally incorporated and named Cumberland in remembrance of the fort that once stood there. Washington’s final visit to the area was during his presidency. Whiskey distillers in Western Pennsylvania launched a violent protest in response to a 1791 excise tax on domestically produced spirits. The tax was part of Treasury Secretary Alexander Hamilton’s economic program and passed by an Act of Congress. Washington saw its enforcement as a pivotal test of legitimacy for the new government. On October 16, 1794, Washington arrived in Cumberland to review the nearly five thousand Maryland and Virginia militiamen who had been called up to suppress the so-called Whiskey Rebellion. His appearance marks the first and only time a President of the United States actually commanded troops directly on the ground. Much to the excitement of the local townspeople, Washington appeared in full military regalia in his role as Commander in Chief. The man who once served as a defeated twenty-three year old aide-de-camp was now cheered and celebrated as the beloved leader of a new nation.

Today, the city of Cumberland pays homage to Washington’s time in the area. The headquarters that Washington used at Fort Cumberland still stands. It is the only remaining structure of the original fort. Moved from its original location, it is now situated in Riverside Park along Wills Creek. In 2008, the Fort Cumberland Patriots Society installed an eight foot tall bronze statue of a young George Washington on the grounds of the Allegany County Circuit Court, sitting atop a hexagonal pedestal that chronicles Washington’s experiences in the region. The city also honors Washington through a Heritage Days street festival each year in June. The festival commemorates the rich history of the area and its connections to both Fort Cumberland and Washington.