William Alexander, Lord Sterling was one of George Washington's most loyal military subordinates during the American Revolution. Sterling previously served as a supply officer during the French and Indian War, where he first met George Washington. He was commissioned as a Brigadier General by Congress in 1776.

Born in New York City in 1726, William Alexander demonstrated early in life an aptitude in both mathematics and astronomy. Likewise, Alexander began to play an active role in the trading ventures of both of his parents until the 1750s.

Alexander served as a provisioning agent for the British army during the French and Indian War. In this role he worked closely as an aide de camp to Governor William Shirley. This position offered Alexander the opportunity to interact socially and professionally with many colonial elites, including George Washington. In 1756, Alexander accompanied Shirley to England to testify on the latter’s behalf. It was during his stay there that he learned of the vacant seat of Stirling in Scotland and began to pursue a claim to the title.

In the aftermath of the French and Indian War, Alexander grew disenchanted with British rule and joined the opposition to Crown policies. He joined the active rebellion in 1775, becoming a general officer the following year. Alexander’s most significant military contribution came in August 1776, when he held off the British troops during the Battle of Long Island long enough to enable Washington to evacuate the remainder of his forces. As a result of these actions, Stirling was captured by the British and spent several months as a prisoner on parole in New York City. He was exchanged later the same year and promoted to Major General on February 19, 1777. 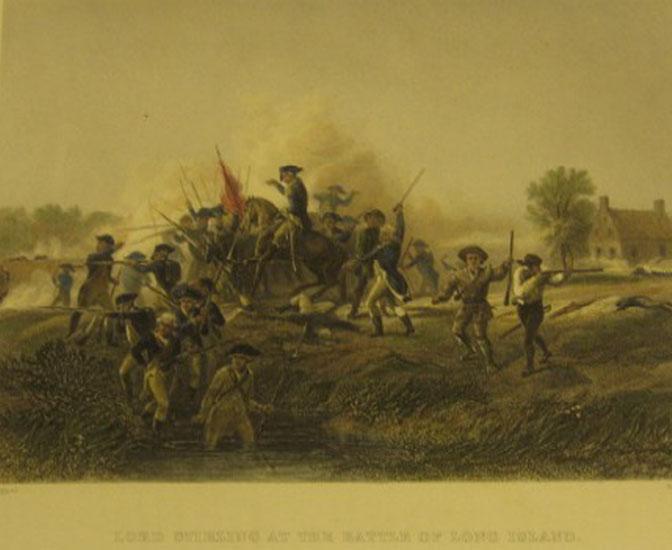 In 1777, Alexander served in the Hudson Highlands for a time, and returned to the Philadelphia area afterwards, taking part in the battles of Brandywine and Germantown. In the aftermath of these affairs, Alexander played a key role in exposing a conspiracy by Thomas Conway and others to unseat Washington as the commander of the Continental Army, the so-called Conway Cabal.

In 1778, Alexander took part in the Battle of Monmouth, where he handled the artillery with particular skill. That summer, between July 4 and August 12, Alexander presided over the Court Martial of Major General Charles Lee.

Alexander supported the successful raid on Paulus Hook, and after which played an important role in the poorly managed Staten Island expedition of January 14-15, 1780. He also sat on the board of Inquiry into the actions of Major John André. In October 1781, he was awarded command of the Northern Department with his headquarters at Albany. While holding this post, Alexander developed plans for a defense against an expected British thrust from Canada.

Alexander was known for overindulging in food and drink. These habits contributed to his early death of gout at Albany on January 15, 1783.