Notorious as the traitor that attempted to give West Point over to the British, Arnold had a distinguished career in the Continental Army prior to switching sides during the war.

Major John André was the British officer assigned to work with Benedict Arnold to hand West Point over to the British.

Learn about the history of West Point from its time as a fortress complex during the American War of Independence to its current use at the home of the United States Military Academy. 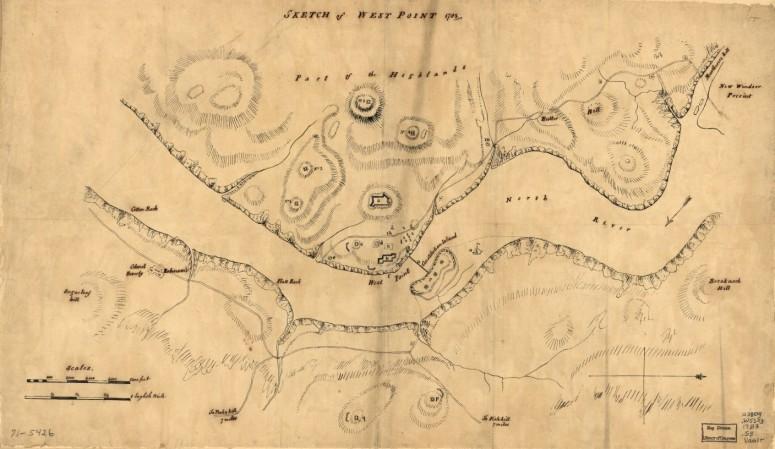 West Point played a crucial role in keeping the new United States from falling to the British during the American Revolution, in the years before the area became known for its famed military academy. West Point is located on a plateau on the west bank of the Hudson River approximately sixty miles north of New York City. In 1781, George Washington called the fortified site “the most important Post in America,” and he worked to keep Patriot control of West Point throughout the Revolutionary War.1

For the revolutionaries, holding West Point meant preventing the British from controlling the Hudson River and dividing the colonies in two. In November 1775, a committee in Congress reporting on fortifications on the Hudson first recommended occupying the position.2 By July 1776, West Point became one of four points along the Hudson River to obstruct British navigation. In December 1777, Washington explained the significance of the Hudson to General Israel Putnam. As the river ran through all of New York, the Hudson was crucial to the transportation of food and supplies as well as communication between the new states.3

In 1778, the Americans began an ambitious effort to build permanent fortifications at West Point. Colonel Louis de la Radiere served as the original chief engineer, until New York Governor George Clinton deemed Radiere as lacking the professional knowledge needed. The accomplished Polish military engineer Tadeusz Kosciuszko replaced Radiere. General Alexander McDougall, whom Washington appointed to command the Hudson Highlands, described Kosciuszko as “esteemed by those who have attended the works at West Point, to have more practice than Col. DeLaradiere, and his manner of treating people more acceptable.”4

Washington closely followed the fort’s progress and considered it McDougall’s first priority. In June 1779, Washington worried that British General Sir Henry Clinton would attack West Point and would “interrupt our easiest communication between the Eastern and Southern states, open a new source of supplies to them and a new door to distress and disaffect the country.”5

Twice during the war, Washington’s fear of losing West Point almost came to fruition. The first time, on June 1, 1779, the British captured two small forts, Stony Point and Verplanck’s Point, twelve miles south of West Point. Washington quickly moved his troops farther up the Hudson to block the British advance. American General Anthony Wayne then led a surprise night attack at Stony Point and succeeded in recapturing the fort. The episode prompted Washington to remind McDougall of the “first in magnitude and importance” of West Point “and in all probability the real of the enemy’s designs.”6

The second close call resulted from the treason of Benedict Arnold in 1780. Arnold caught Washington’s eye after the Battle of Quebec in late 1775 and again after the Battle of Saratoga in October 1777. Arnold’s persistence and strong leadership exemplified the qualities that Washington valued in his officers. However, Arnold grew disenchanted with the American army after being passed over for promotions. In May 1779, he became the commander of operations in the Philadelphia area but also secretly became a part of the British army, receiving 6,000 pounds and a commission in the British army in exchange for his treason.7

After receiving command of the Hudson Highlands in June 1780, Arnold agreed to help the British capture West Point. The plot included capturing Washington while he dined with Arnold at West Point. However, the plan failed because the British ship Vulture never received the message when Washington arrived in September 1780. Arnold’s plot was later discovered when his British contact, Major John André, was captured on September 23, 1780, while carrying Arnold’s papers. The betrayal personally affected Washington because he had trusted Arnold. “He [Arnold] seems to have been so hackneyed in villainy, and so lost to all sense of honor,” Washington wrote of his former officer.8

After the war, viewing a standing army as dangerous, Congress demobilized the American forces except for fewer than a hundred men at Fort Pitt and West Point. Even with the dissolution of the army, Washington supported creating a permanent military academy. The Revolutionary War made the lack of formal military training in America abundantly clear. In 1790, Secretary of War Henry Knox and Secretary of the Treasury Alexander Hamilton made the first official recommendation for a military academy. They favored West Point as the site of the academy because its location and fortifications would make it difficult for enemies to siege. Congress rejected the proposal, despite having recently gained full possession of West Point by compensating Stephen Moore, the private citizen who owned the land at the fort.

In 1794, President Washington established the first school for artillerists and engineers at West Point. He continued making recommendations to Congress to establish a national military academy, but the emerging party division between Federalists and Democratic-Republicans kept the body from acting. In response, in 1799,Hamilton wrote that “a regular Military Academy appears to me indispensable.”9

In 1802, during Thomas Jefferson’s presidency, the Military Peace Establishment Act created the United States Military Academy at West Point. Not much had changed of West Point’s structure since the American Revolution. It was two-stories high, little bigger than a schoolhouse. However, Jefferson made the academy a center for training army officers with Democratic-Republican party allegiances.

Today, West Point remains the U.S. Army’s primary officer training academy and includes more than 1,400 structures across 16,000 acres. The academy fulfills Washington’s vision for an institution that provides America’s officer corps with unrivaled training, in a setting to match.