Not quite three months before his death, George Washington commented in a letter to his farm manager that health was "amongst (if not the most) precious gift of Heaven," and noted that without it "we are but little capable of business, or enjoyment."1 Then sixty-seven years old, Washington had lived long enough and experienced illness close up—both in terms of his own health and that of his family and friends—to understand the importance of good health.

George Washington suffered several severe illnesses during his lifetime. Although he was not wounded during his military career, he did become so sick during the French and Indian War that he contemplated leaving both the army and but public life altogether. The depression caused by this illness was evident in a letter Washington wrote during this period: "I have never been able to return to my command, since I wrote to you last, my disorder at times returning obstinately upon me, in spite of the efforts of all the sons of Aesculapius [doctors], whom I have hitherto consulted. At certain periods I have been reduced to great extremity, and have now too much reason to apprehend an approaching decay, being visited with several symptoms of such a disease."2

Washington, of course, recovered and went on to have an active life in the military, as a farmer, and statesman. When in good health, Washington believed that his weight was a little over 200 pounds. As he noted in a letter he wrote when trying to find a new horse after his presidency, "The Size and strength [of the horse] must be equal to my weight, which without the saddle may be estimated at 210 lbs."3 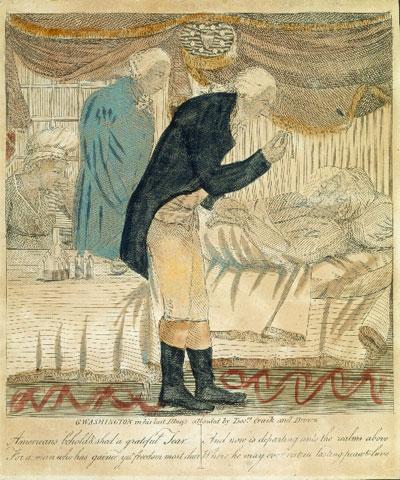 Washington also wrote about his ideas regarding personal health. In advice to a military colleague on the subject of health, Washington advised prevention: "I am sorry to hear of your long indisposition and repeated attacks; it may be well to nurse a little. Disorders oftentimes [sic], are easier prevented than cured, and while you are in the way to re-establish your health, (on which I congratulate you) it is better to use preventatives, than alternatives &c. &c. with which the Apothecaries [sic] Shops are replete."4

Despite ill health on at least two occasions during the presidency, Washington expressed an almost playful attitude about his health following his retirement to Mount Vernon in 1797. As explained by Martha Washington in a letter to family friend, Elizabeth Willing Powel, Washington remained accepting of his eventual death: "I am now, by desire of the General to add a few words on his behalf; which he desires may be expressed in the terms following, that is to say, that despairing of hearing what may be said of him, if he should really go off in an Apoplectic, or any other fit, (for he thinks all fits that issue in death, are worse than a love fit, a fit of laughter, and many other kinds which he could name); he is glad to hear beforehand what will be said of him on that occasion; conceiving that nothing extra: will happen between this and then to make a change in his character for better, or for worse."5