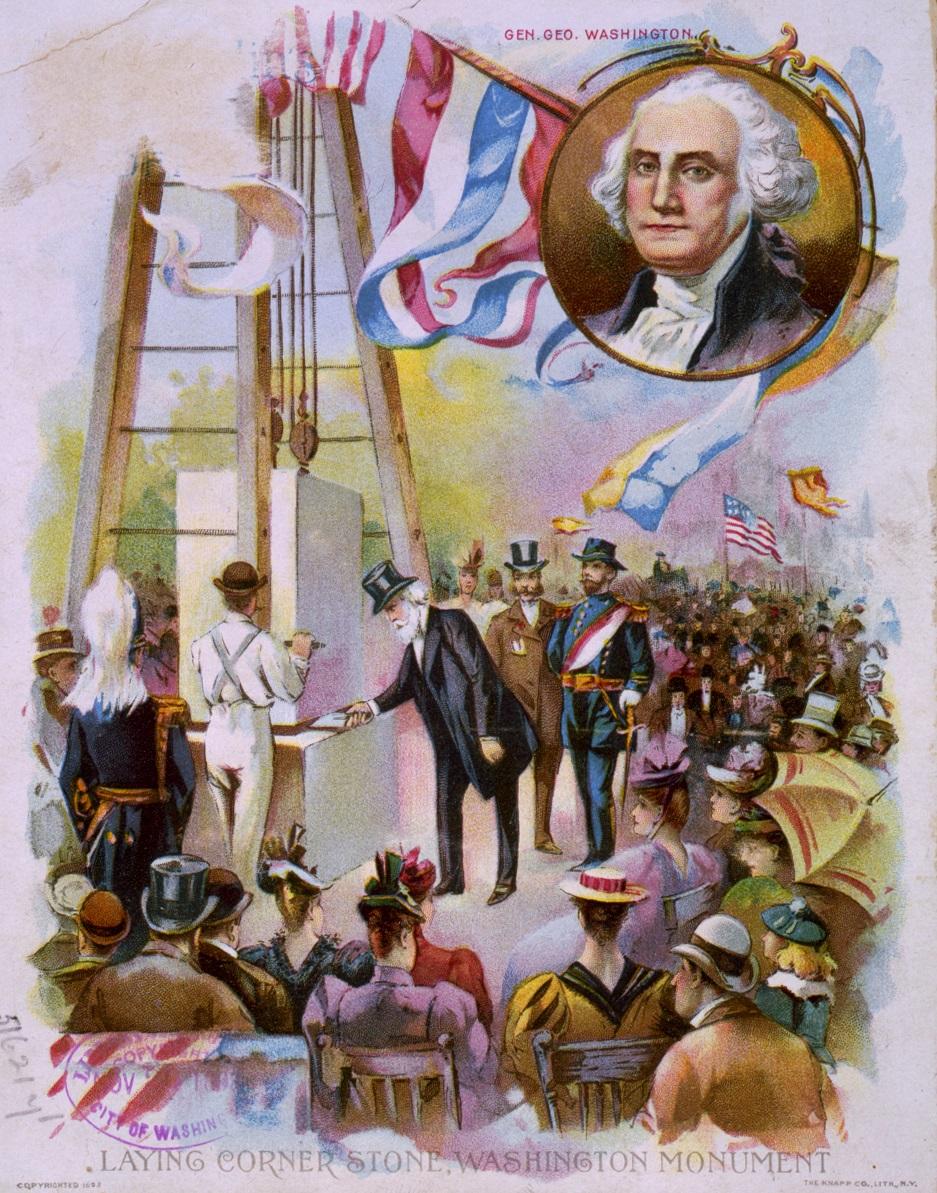 The Washington Monument is a 555-foot-tall obelisk honoring George Washington on the National Mall in Washington, D.C. operated by the National Park Service. Proposed in the year 1800 and begun in 1848, it was not opened to the public until 1888. The unusually long time it took to complete the monument was less about the intent of paying public homage to George Washington, who remained “first in war, first in peace and first in the hearts of his countrymen” and more about the American ambivalence towards monument making, especially in the Antebellum period.  Large scale monument making in the United States between the end of the American Revolution and the Civil War years was scarce and fraught with financial, political, and ideological issues. Although another major obelisk, the Bunker Hill Monument, had been dedicated in Charlestown, Massachusetts in 1825, it was also not finished until 1844.  But this reluctance to erect grand monuments would change by the end of the nineteenth century, when Americans became zealous monument makers. Although the Washington Monument was finished in December of 1884 and dedicated in February of 1885, several more pieces were added before opening to the public in 1888. For a few years, the Washington Monument remained the world’s tallest structure until the erection of the Eiffel Tower in Paris in 1889.

Shortly after Washington’s death at the turn of the nineteenth century, multiple, diverse voices expressed opinions as to where the body and therefore memory of the first president belonged and how this memory should be shaped. Martha Washington expected her husband to lie in the Washington family tomb at Mount Vernon, but John Marshall and a committee in Congress proposed a burial site-as-monument in a crypt in the new Capitol building. Other proposals included building a pyramid-like mausoleum available for public viewing, erecting an equestrian statue, publishing a biography of Washington, and some combination of the above. The conversations around the most appropriate form of monument to honor Washington were informed primarily by partisan politics: Federalists and Jeffersonian Republicans disagreed over form, meaning, and money. With the creation of a new tomb at Mount Vernon in the early 1830s--also the centennial of Washington’s birth--it was clear his remains would not be removed.

Finally, the path was open to a commemorative monument on the National Mall, at the center of the axis point on Pierre Charles L’Enfant’s design for the new capital city. Due to marshy soil, the site identified proved untenable and the monument was moved slightly off-axis. The commissioning agent, the Washington National Monument Society, chose Robert Mills (1781—1855) for the project, an architect known for his design of the Washington Monument in Baltimore, a 204’ Doric column that had been completed in 1829, much to the dismay of the national monument supporters in the capital city. Appointed by President Andrew Jackson, Mills was also the nation’s first federal architect and was later responsible for many buildings on the National Mall, including the U.S. Post Office, the Patent Office, and the Treasury Building. Nineteenth-century design was often a reflection of styles borrowed from ancient history, and could be exuberant, as Mills’s original design for the Washington Monument demonstrates. But, the process of fundraising for the project proved both lengthy and difficult, and with this realization and changes in taste, the colonnade, statuary and rotunda aspects were jettisoned in favor of the Egyptian-inspired obelisk at the center, which was intended as an observatory.

The work on the monument moved forward with the original foundation built of blue gneiss rock from the Potomac Valley and a pure white marble cornerstone weighing 24,500 pounds donated by Thomas Symington and his Beaver Dam quarry in Baltimore County, Maryland. By the mid-1850s a series of unfortunate events led to the stagnation of the construction: a secondary group wrested control from the Washington National Monument Society, architect Robert Mills died, and funding dwindled to unsustainable levels. At 176-feet in height, the Washington Monument still had a long way to go, and the outbreak of the Civil War further delayed its construction.  Nothing was done to the monument during wartime. The land around it reverted to grazing land for animals, with a slaughterhouse close by. Practicality overrode sentimentality both during and directly following the war, and the monument remained at the sidelines of American attention until the eve of the Centennial—the one hundredth anniversary of the founding of the United States. Although Philadelphia was the site of the Centennial Exposition, Americans found ways of recognizing this important milestone in their history, and once again, the Washington Monument had the attention of Congress, who voted for a two-million-dollar appropriation for its completion.

As a condition of contributing federal funds to the project, Congress gained control of the Washington Monument. As part of the development of Washington, D.C., Congress utilized the Army Corps of Engineers and formed a Joint Commission for the Completion of the Washington Monument, retaining the Washington National Monument Society as advisers. The National Mall, like the Federal Government itself, was developing into an ever more formalized system of governance. New studies were done to determine the safety of the proposed height relative to the weight and the size of the foundation and opinions were sought from others around the world. One response proved fruitful: George Perkins Marsh, an American minister to Italy, who had privately studied obelisks suggested that if windows were inserted into the monument, they should be the same size and shape as one of the building blocks and that based on the size of its foundation, the Washington Monument should not be more than 550-feet high. Both suggestions were accepted, and, in addition, the foundation was enlarged and sunk further into the earth. After more years of wrangling money from Congress and stabilizing the structure, the Washington Monument began to climb upwards once again, and with it, the ironwork in the interior for the staircase and elevator.

Finally, at the end of 1884, the pyramidion, a 55-foot tall marble capstone weighing 300 tons was lowered into place, and an aluminum cap was placed at the apex. Although many details of the construction were not yet finished, a dedication ceremony was held on a blustery day on February 21, 1885 (the day before George Washington’s birthday) with the monument finally opening to the public on October 9, 1888. Visitation has grown from 200,000 people in the 1880s to more than six million today. Over the century that followed its completion, the Washington Monument silently witnessed great changes in American society, both natural and human-made, while withstanding lightning, rainstorms, and other elements. In the early twentieth-first-century, however, the cumulative effects of an earthquake in 2011 and a hurricane later that year forced the National Park Service to close the interior of the monument to visitors on a periodic basis to conduct repairs, including from 2016 to 2019, to rebuild the elevator service.

Costello, Matthew R. The Property of the Nation: George Washington’s Tomb, Mount Vernon, and the Memory of the First President. Lawrence, KS: University Press of Kansas, 2019.