Over a span of more than four decades George Washington twice expanded and refurbished the Mount Vernon Mansion. The building was originally constructed in 1734 by Washington's father Augustine and was inherited by George Washington following the 1752 death of his older half-brother Lawrence. Washington removed and replaced an earlier series of outbuildings, added other structures to support his evolving plans, and reorganized the surrounding gardens and grounds.1

George Washington played a central role in designing the Mansion, outbuildings, and surrounding landscape at Mount Vernon. With a general lack of professional architects in eighteenth century North America, Washington followed a common path for estate holders, consulting a variety of sources to assist in developing plans, including: books on building, architecture, and garden design, inspiration from other structures and gardens, and advice from artisans and builders.2

When Washington took possession of Mount Vernon in 1754 he initially retained his father’s house. For most of the next four years Washington was busy serving as an officer in the Virginia militia fighting alongside British troops during the French and Indian War. Following the war, Washington made plans to return to Mount Vernon and commit himself to the life of a tobacco planter. As a result, he decided to enlarge and remodel the structure to suit his changing needs. Washington directed that the mansion be raised from one-and-one-half to two-and-one-half stories, rearranged interior spaces, reconfigured the main staircase, and upgraded the finishes of publicly accessible areas.3

For most of the time that the house was under construction, Washington was absent from Mount Vernon. At first he was serving with the British during the waning days of the war and afterwards embarked on his courtship of the widow, Martha Dandridge Custis. Washington hired a local builder to oversee the renovations and the two men kept in constant contact through letters.

Washington began planning the second rebuilding of Mount Vernon in 1773. During this renovation Washington worked to design a house that was original. However, the design also was inspired by many details derived from the neo-classical aesthetic popularized by the Italian architect and author, Andrea Palladio. Washington was exposed to the ideals and designs of Palladianism through a variety of builder’s guides often referred to as "pattern books" that were published in the eighteenth century.4

Once again the house was enlarged, adding wings to both ends and the double-height portico running all along the east façade. In addition, the open quadrant colonnades that linked the house were attached with two dependencies to create a five-part Palladian façade. Although the overall effect evoked classical influences, the colonnades’ open sides were unique. So was combining the cupola and the great portico, unique for mid-eighteenth-century Virginia residential architecture. In addition to their aesthetic contributions, each of these elements was practical in nature as well, improving building ventilation, providing shelter from the weather, and maximizing cool breezes and aesthetic views.5 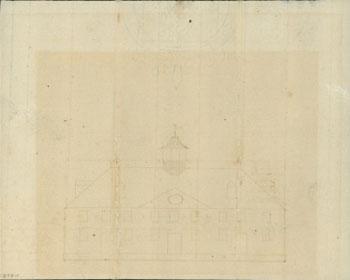 Evidence exists regarding Washington's direct role in the Mansion's refurbishment. Drawn in preparation for the expansion that began in 1774, the only known surviving elevation plan of the Mansion (the west façade) was executed in Washington's hand.  The final result departed from the concept in an all important aspects; the actual elevation was much less symmetrical than suggested by the drawing. Part of the problem was inherited from the original structure whose central doorway had been positioned slightly off-center, an anomaly that became more noticeable as the design evolved. But Washington also made a series of decisions that increased the challenge, as he installed a more gracious staircase in the passage.6 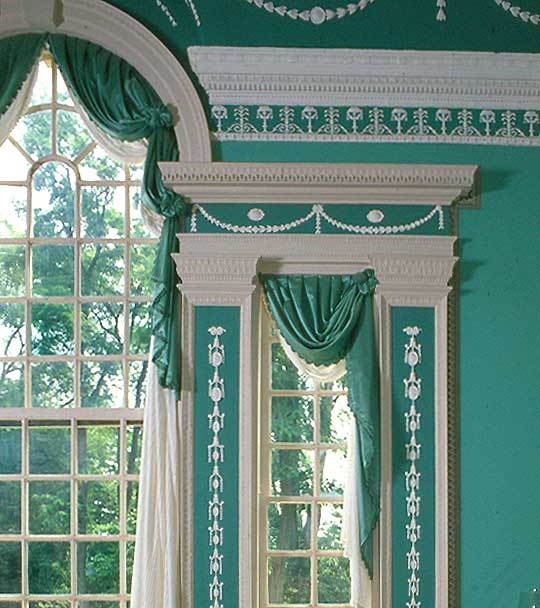 Washington incorporated elements from a number of English pattern books in his designs for both the Mansion’s interior and exterior. Two books by Batty Langley, The City and Country Builder and Workman's Treasury of Designs (1750), and The Builder's Jewel (1757), were particularly influential.

They provided the inspiration for the Palladian window as well as the Tuscan piers supporting the piazza, and the frame of the elliptical window in the west pediment. On the interior, Washington once again referred to Langley, as well as to Abraham Swan's The British Architect (1745) and William Pain's Practical Builder (1774).

While Washington was reinventing his house along neo-classical lines, he also demolished and replaced most of the outbuildings and began to redesign the landscape following the Picturesque or naturalistic ideals that were the fashionable complement to British-Palladian architecture. English sources once again served as an important reference, particularly Batty Langley's New Principles of Gardening (1728), a copy of which Washington purchased in 1760. One of the main tenets of the new aesthetic was to incorporate pleasing features of the natural scene into the design.7

Notes:
1. Robert F. Dalzell, Jr., and Lee Baldwin Dalzell, George Washington’s Mount Vernon: At Home in Early America (New York: Oxford University Press, 1998). The dates for the three main phases of construction have been confirmed via a program of dendrochronological investigations that were carried out by Daniel Miles, Oxford Dendrochronology Laboratory (2007). These findings contradict an earlier interpretation that the superstructure of the 1735 house had been removed and enlarged during Lawrence Washington's tenure of ownership.

7. For specific details of Washington's landscape design, and on the significance of the influence of British sources on his thinking, see Peter Martin, The Pleasure Gardens of Virginia: From Jamestown to Jefferson (Princeton, New Jersey: Princeton University Press, 1991, 134-144, and Ann Leighton, American Gardens in the Eighteenth Century: "For Use or for Delight" (Boston: Houghton Mifflin, 1976), 247-269.