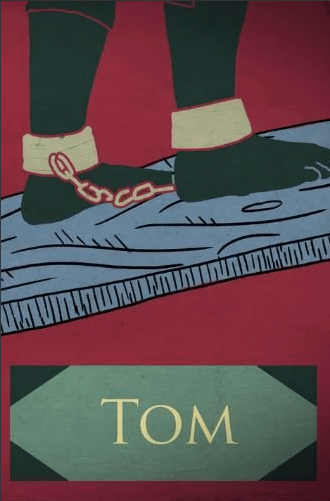 On July 2, 1766, the schooner Swift lay anchored in the Potomac River awaiting a trading voyage to the Caribbean. Below deck, an enslaved man named Tom sat in handcuffs. A foreman on Mount Vernon’s River Farm, Tom had been inherited by George Washington from his elder half-brother Lawrence in 1754. Twelve years later, the enslaved man made a failed attempt to flee the plantation. In a letter to Joseph Thompson, captain of the Swift, Washington declared Tom a “rogue and a runaway” and directed that he be sold in the West Indies. Washington commented that Tom was “exceedingly healthy, strong, and good at the Hoe,” and “he may . . . sell well, if kept clean and trim’d up a little.”1

Thompson succeeded in selling Tom on the island of Saint Kitts for £40 local currency. In return, Washington received 66 gallons of spirits and 10 pounds of sweetmeats (candied fruit), as well as “two half-joes, 1 pistole,” and “small silver” (Portuguese and Spanish currency used in the colonies).2 Tom was probably purchased by the owner of one of the island’s many sugar plantations, known for harsh working conditions and high mortality rates. Nothing is recorded of his life beyond this point.

Washington sold at least two other enslaved people to the Caribbean, his punishment of last resort. In 1772 Will Shag, a thirty-one-year-old field-worker on one of the Custis properties in York County, Virginia, engaged in repeated conflicts with an overseer and twice attempted to run away. Washington paid £13.11s.6d to a ship captain to transport Shag to Port-au-Prince in exchange for molasses.3 By the 1780s Washington had stated his opposition to buying and selling slaves, but this did not stop him from selling Jack, a wagon driver, to the West Indies in 1791 “to be disposed of,” as a secretary wrote in Washington’s ledger.4

The threat of such sales loomed over Mount Vernon’s enslaved community. When fifteen-year-old Ben was caught fighting and engaging in other “rogueries,” Washington instructed his farm manager to tell the young man that if he did not stop, “I will ship him off (as I did Waggoner Jack) for the West Indias, where he will have no opportunity of playing such pranks as he is at present engaged in.”5

Tom, Will Shag, Jack, and Ben lived in a world in which their bodies were commodities that could be bought, sold, and “disposed of.” Being sold to a Caribbean sugar plantation was often akin to a death sentence. Burns, lost limbs, and fatal accidents were common. On average, an enslaved worker was expected to live not more than seven years after arriving in the West Indies.6