In the spring of 1783, citizens gathered in towns and cities across America to celebrate the signing of the Preliminary Articles of Peace ending the American Revolution. In Newport, Rhode Island, the "day was ushered in by ringing of bells and firing of cannon." A procession of soldiers and civilians in Charleston, South Carolina was accompanied by "five Field Pieces…, a Band of Music, Colours, Drums, and Fifes." The inhabitants of Marblehead, Massachusetts assembled at the "town-house" where an ox was “provided and cooked” and a large “beacon” was “surrounded with combustibles” and “converted to a bonfire."1

While Americans chose to commemorate peace and victory in a variety of different ways, all of these celebrations had one thing in common. Everywhere people came together to mark the occasion, they passed around glasses and drank toasts. In one town, "a large vessel was filled with liquor, and duly replenished throughout the day." In another, some "five hundred gentleman and ladies" partook of a "cold collation."2

In many cases, revelers drank a total of thirteen toasts (one for each state in the new Union), and reporters carefully recorded what each toaster had said to publish in the newspapers. Some speakers paid tribute to political leaders: to "The Continental Congress" or "Our European allies." Others were more practical, proclaiming that "Commerce and Agriculture flourish in America" and that "our trade and navigation extend." Many remarked on the lasting significance of the occasion, hoping that the "citizens of the United State eternally cherish those rights, for which they fought, bled, and conquered," or that the "peace prove glorious to America and last forever." One particularly optimistic toaster in South Carolina wished that "the Fair Sex [might] prove kind and propitious to the brave and deserving."3 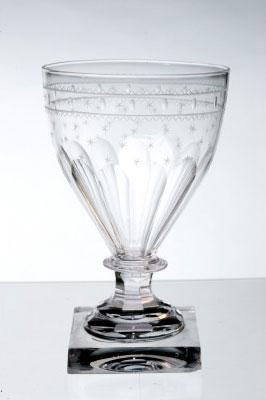 But wherever Americans tipped their glasses in 1783, they almost always reserved one special toast for George Washington. In Newport revelers drank to "General Washington and the American Army and Navy;" in Bucks County, Pennsylvania it was "General Washington, and the officers of the army." In Charleston, merrymakers saluted "General Washington, the Western Star" – may he be "enabled to retire with Satisfaction from the Field of Victory and Glory." A poet in Boston put his toast to verse, asking his readers, whenever they gathered to "drink around each others health," to:

Pray don’t forget the soldiers bold
With WASHINGTON the brave…

Health to his honor I’d freely drink,
Had I a glass of wine;
And whosoever with me shall think,
May mix their toast with mine.4

Alcohol and drinking were common features of everyday life for ordinary Americans in the eighteenth century. While special occasions like the signing of the Treaty of Peace called for unusually liberal bouts of toasting, most Americans imbibed on a daily basis. Average colonists drank as much as four gallons of hard liquor every year, as well as considerable quantities of wine (for those who could afford), beer, or hard cider.5 Taverns, inns, and alehouses were among the first businesses opened by European immigrants in colonial Philadelphia, and the spread of drinking establishments kept pace with the rapid blossoming of the population during the seventeenth and eighteenth centuries. In 1686 there were six public houses in Philadelphia; by 1756, that number had grown to 101.6 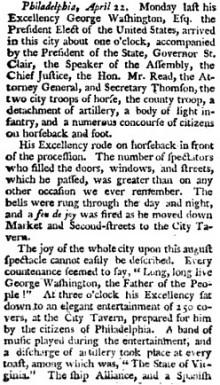 General Washington was not against enjoying a drink himself, serving libations to his frequent guests, or even supplying alcohol for political purposes. During the political campaign leading up to his 1758 election to the Virginia House of Burgesses, Washington famously lubricated a gathering of potential supporters by providing “a hogshead and a barrel of punch, thirty-five gallons of wine, forty-three gallons of strong beer, cider, and dinner” at his own expense.7

Washington’s friends, associates, and other correspondents, meanwhile, frequently expressed their own gratitude, appreciation, and good will regarding drinking and toasting. In May 1756, early in Washington’s political career, childhood friend William Fairfax informed him that "Your Health & Success was toasted at almost all Tables at W[illia]msburg."8 Upon returning to his post in Paris after serving with Washington during the Revolution, French soldier Charles-Louis de Montesquieu promised that, "I shall often with my Officers, drink to your Excellency’s health—All who have been under your orders in America, would get drunk with pleasure to this toast."9

The pervasiveness of toasting to Washington, particularly at the conclusion of the Revolutionary War, speaks to the universality and stature of the General in early American culture. In a new nation that could only be generously labelled a single, unified "nation," there were few truly national figures – individuals that ordinary Americans from New Hampshire to Georgia could all recognize. In this regard, no figure stood above George Washington. When average citizens gathered to share in toasts in 1783, not only did they almost always single out George Washington for a special drink, but usually they singled out only Washington. In this sense, the name of Washington became a powerful cultural symbol that helped unite a collection of disparate states into one coherent Union.