In the 1850s the campaign of the Mount Vernon Ladies' Association to acquire and preserve George Washington's home and estate spurred renewed interest in the Washington family. Artists, historians, and Washington enthusiasts made the pilgrimage to Mount Vernon following Washington's death. However, the official opening of Mount Vernon to the public transformed the once private Washington residence into a destination for Americans eager to connect with its history.

Upon visiting Mount Vernon, Rossiter wrote of his sadness to see the deteriorated state of the buildings and grounds. The young artist did, however, have hope in the newly formed Mount Vernon Ladies' Association. Rossiter urged the restoration of the mansion and furniture to the condition that Washington left them. Although Rossiter reported sitting under a tree while sketching the exterior of the mansion, he did not mention recording the interior of Washington's residence. Perhaps the artist was overwhelmed with the jostling crowds he described in the house or was limited because only a hall and two empty rooms were on view to the public. Rossiter did not relay if the study was one of the two rooms that he viewed. However, it does appear that many elements in George Washington and Family were derived from another source, that of author and historian Benson J. Lossing. 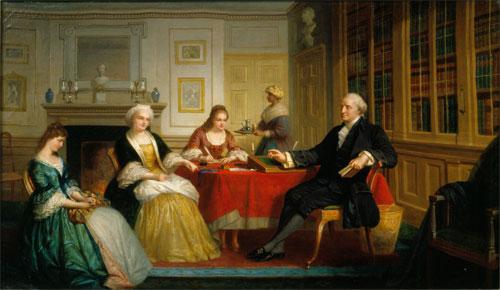 George Washington and Family is staged in Washington's study, his most private of spaces. The east wall is lined with Washington's books in glass-fronted shelves that remain preserved at Mount Vernon to this day. The background of the painting is the north wall of the study, with elements of architecture and decoration drawn directly from Lossing's descriptions of Mount Vernon. Rossiter also clearly modeled the mantelpiece decorations on Lossing's illustration of Chinese export porcelain and argand lamps placed in the New Room.

The middle and foreground of the painting are dominated by the artist's renderings of George and Martha Washington, Martha's granddaughters Eleanor and Elizabeth Custis, and an enslaved woman. George Washington reclines with one hand marking his place in a book while the other hand rests upon a writing desk. The quiet observer and attendant to the scene is an enslaved woman as she carries into the room a pewter pitcher of liquid refreshment. Rossiter integrates the myriad objects and characters described and depicted by Lossing into a cohesive and aesthetically pleasing composition. While many of the early depictions of Washington focused on his role as a military leader and statesman, this painting revealed his familial role.

Rossiter, Thomas P. A Description of the Picture of the Home of Washington After the War. New York: D. Appleton and Company, 1859.