One of the most influential writers during the American Revolution, Thomas Paine also helped shape the political ideologies of George Washington. Yet Paine's popularity was based not solely on original ideas, but rather his feverish level of activity and style of writing. Evidenced in the title of his most famous pamphlet, Common Sense, Paine wrote in a manner that appealed to the masses, not just American elites. In addition, Paine constantly agitated for democratic reforms not only in the United States, but also in France and England as well, and helped link the dramatic transformations of the various nations in the northern Atlantic world during the late 1700s. 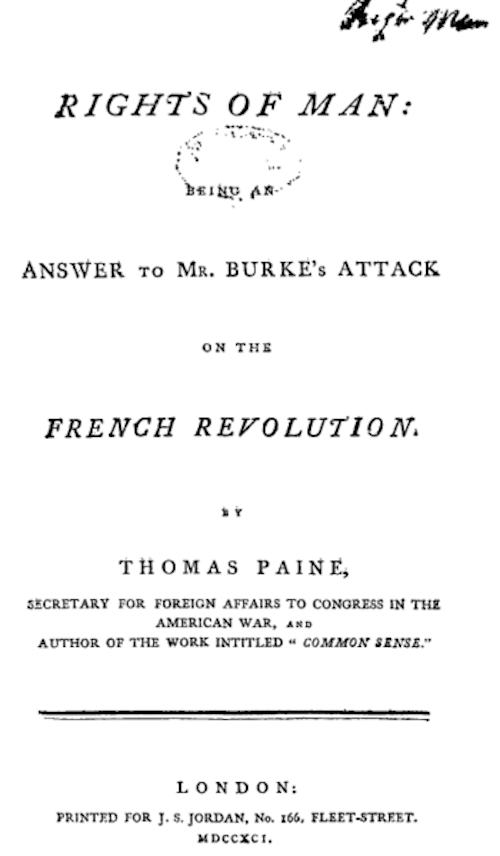 Paine was born in 1737 in Thetford, England. After brief stints as a sailor and tax official, Paine was introduced to Benjamin Franklin in London in 1774 and subsequently moved to Philadelphia. As anger at Great Britain deepened and armed conflict erupted in the American colonies, Paine wrote his most famous pamphlet, Common Sense, which appeared in January 1776. While many other writers spoke of England trampling on the British rights of colonials, but believed King George III would soon rectify the wrongs done to the colonies, Paine argued that the entire British system was fundamentally based on a tyranny of aristocracy and monarchy.

Paine claimed that the colonies should sever their ties to England once and for all, establish a democratic government with a written constitution, and thus gain the advantages of free trade and freedom from being constantly dragged into European wars. Paine wrote clearly and simply in order to reach the common masses and his ideas contributed greatly to spreading enthusiasm for independence from Great Britain. It has been estimated that nearly 50,000 copies of the pamphlet appeared in the colonies in the years leading to the Revolution.

George Washington was amongst the wide readership of Paine's writings. Before the famous crossing of the Delaware on the way to victory at Trenton in late 1776, General George Washington ordered officers to read Paine's The American Crisis to the Continental Army. Contained in that pamphlet were Paine's famous words, "These are the times that try mens souls." During the Revolution, Paine also worked with radicals in Philadelphia to draft a new state constitution in 1776 that abolished property qualifications for voting and holding office.

Paine returned to Britain in 1787, but soon experienced persecution due to his fervent support of the French Revolution. When the conservative English writer and politician Edmund Burke heavily criticized the French Revolution, Paine wrote a new work titled The Rights of Man which argued that oppression in society stemmed from aristocratic control of an unequal and undemocratic political system. Paine was charged with treason and escaped to France in 1793 where he was elected a member of the National Assembly. When he objected to the beheading of the French King Louis XVI, he was thrown in jail until the American ambassador to France, James Monroe, was able to secure his release.

Paine remained in France for several years, writing his last well-known work, the three-part Age of Reason. In 1796 Paine published a bitter open letter to George Washington, personally attacking Washington as an incompetent general and elitist president who had betrayed Paine for not protecting him when he claimed American citizenship when arrested by France. Paine scathingly wrote in regards to Washington that, "Monopolies of every kind marked your administration almost in the moment of its commencement. The lands obtained by the Revolution were lavished upon partisans; the interest of the disbanded soldier was sold to the speculator…In what fraudulent light must Mr. Washington's character appear in the world, when his declarations and his conduct are compared together!"1 Despite Paine's dissatisfaction with the years following the America Revolution, Paine returned to the United States in 1802 upon the invitation of President Thomas Jefferson. Paine remained in the United States until his death in 1809.