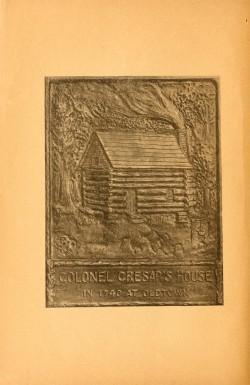 An English-born merchant, explorer, militia leader, and land speculator who lived in the vicinity of what is now Old Town, Maryland, Cresap's land ventures brought him into contact with George Washington on several occasions. The two men eventually became involved in a lengthy land dispute over a section of land in the Ohio River Valley, which was eventually settled between Washington and Cresap's descendants.

Thomas Cresap was born in Skipton, Yorkshire, England in 1702. At the age of fifteen, he left for North America, arriving in Maryland later in 1717. He is listed in a 1723 census with the occupation of carpenter. However, carpentry was only one of several endeavors that Cresap undertook. In 1734, Cresap was made a captain in the Maryland militia. Two years later, in 1736, he moved to the area of Shawnee Old Town on the Maryland side of the Potomac River and established a small inn and trading post about fifteen miles from the future site of Fort Cumberland. Since his trading post stood near the confluence of a number of important trails, it became one of the most important posts in the Maryland hinterlands.

The first meeting between Thomas Cresap and George Washington took place in 1748, when Washington ventured to Shawnee Old Town on his way westwards. The following year, Cresap became a founding member of the Ohio Company of Virginia. As part of his contribution, Cresap assisted in the laying out of the company road from Wills Creek to Monongahela. This route became important as it was later followed by Major General Edward Braddock during his 1755 military campaign.

In the aftermath of Washington's failed 1754 mission to Fort Duquesne, Cresap—by then a colonel in the Maryland Militia—was entrusted with guarding the French prisoners taken by the expedition. Washington and Cresap came into contact in 1755 as well, during Braddock's expedition which ended with the defeat at the Monongahela River. In the subsequent retreat, Cresap was forced to evacuate, along with many other local residents, down the Potomac River to the Conococheague settlement. As a result of increased Native American pressure on the frontier, Cresap's post had to be abandoned in 1756. Thomas Cresap's last meeting with George Washington came in 1770 when Washington stopped at Cresap's trading post on his way to inspect his western land holdings. Cresap had returned from a trip to London on the business of the Ohio Company and kept Washington informed as to the status of the company's affairs.

Cresap's land speculation in the west brought him into conflict with others aside from Washington. His aggressive pursuit of lands in areas already claimed by Pennsylvania led him to being labeled a criminal in that colony. Cresap was also a strong supporter of the protests against British policy that eventually developed into the American Revolution. He died in 1790, at the age of 88.