The Great Kanawha River, also known as the Kanawha River, is a tributary of the Ohio River formed by the juncture of the Gauley River and the New River in present-day West Virginia. Together, the Great Kanawha River and the Little Kanawha River, also a tributary of the Ohio River, help to form the Kanawha Valley. George Washington recognized the value of land in the valley and sought to include the tracts in the lands granted to French and Indian War veterans, promised by Virginia Lieutenant Governor Robert Dinwiddie's Proclamation of 1754. Between 1769 and 1773, Washington devoted significant time and energy securing the land promised to him and other Virginians who fought in the war.

The Proclamation of 1754 declared that 200,000 acres would be set aside on the Ohio River for the officers and men who voluntarily served in the expedition to the Monongahela that year. Later, the Royal Proclamation of 1763 instructed American colonial governors to award veterans of the French and Indian War tracts of western land ranging from fifty to 5,000 acres, depending on rank. However, since the same proclamation also closed western lands beyond the Appalachian Mountains to settlement, none of the Virginia veterans received their bounty land for a decade after the war. On December 15, 1769, George Washington first petitioned the Virginia governor and council on behalf of the officers and soldiers of the Virginia Regiment of 1754 for the land promised. The council approved the survey of the 200,000 acres, which was to be made in no more than twenty tracts along the Great Kanawha and Ohio Rivers. Washington worked to obtain tracts along the shores of the Great and Little Kanawha Rivers. Between 1772 and 1774, Washington claimed four tracts in the Kanawha Valley totaling 23,216 acres.

William Crawford, who served as Washington's western land agent, began to survey lands in the Kanawha Valley in 1771. Three years later, by 1774, Washington had claimed four tracts surveyed by Crawford: three on the Ohio River between the Little Kanawha and Great Kanawha rivers totaling 9,157 acres and one tract of 10,990 acres along the Great Kanawha.1 The first tract measured 10,990 acres, the largest of the four, which ran for seventeen miles along the west, or northern, bank of the Great Kanawha River.2

The second bounty allotment, known as the Pocatellico survey, was made by Crawford in November 1773. Washington secured a tract of 7,267 acres from this allotment on the Great Kanawha (3,953 acres in his own right and the rest via a trade with George Muse).3 In November 1770, the Virginia council ordered that a tract of 7,276 acres on the Great Kanawha be issued to Washington and Muse in allotments of 3,953 acres and 3,323 acres respectively. In an agreement between the two men dated August 3, 1770, Muse let Washington have "one full third part of all the Land which he the said Muse now is, or hereafter shall be, entitled to" under the Proclamation of 1754. Washington was also able to secure the rest of the land in the allotment by exchanging 2,000 acres of nearby land he bought from Colonel William Bronaugh.4 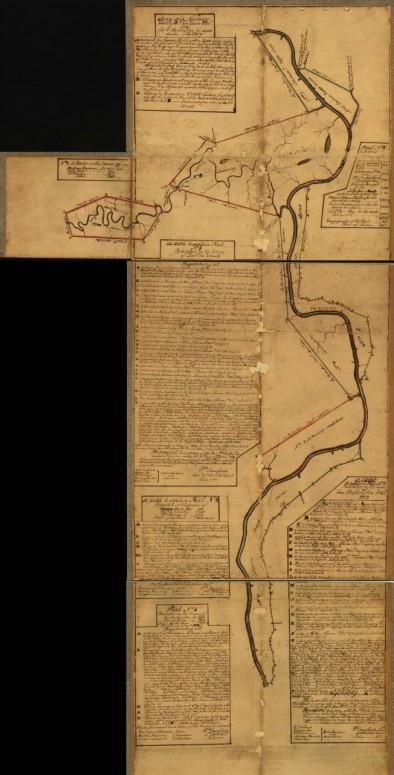 On November 6, 1773, after gaining the Virginia council's approval for the second allotment of land under the Proclamation of 1754, Washington persuaded John Murray, 4th Earl of Dunmore, royal governor of Virginia,  and the council to approve warrants of survey for those entitled to land under the Royal Proclamation of 1763.5 Under this proclamation, Washington qualified for 5,000 acres for his service as colonel of the Virginia Regiment. In addition, he bought the 3,000 acres of Captain John Posey, and the 2,000 acres of Lieutenant Charles Mynn Thurston.

With Posey's warrant for 3,000 acres, Washington claimed a tract of 2,813 acres on Millers Run at Chartiers (Shurtees) Creek and 187 acres in a tract known as Round Bottom on the Ohio River. Through the Thurston warrant, Washington obtained a tract of 2,000 acres on the Great Kanawha at the mouth of the Coal (Cole) River, adjacent to Washington's allotments on the Great Kanawha under the terms of the Dinwiddie Proclamation of 1754. In early 1774, Washington obtained the ability to claim 3,000 more acres of bounty land under the Royal Proclamation of 1763 through his purchase of a warrant from John Rootes. Washington eventually claimed three tracts of land on the Little Miami River in 1790.

The final Kanawha Tract totaled 2,950 acres and ran downstream from present-day Charleston, West Virginia, along the east, or south bank of the Great Kanawha for about six miles in what was then Botetourt County (Virginia). Washington claimed the parcel as part of the 5,000 acres provided by the Proclamation of 1763 for his service in the French and Indian War. Washington had the warrant for his 5,000 acres directed to Samuel Lewis, the Botetourt County surveyor, in 1774.

On November 6, 1774, Lewis issued Washington a certificate of survey for 2,950 acres on the Great Kanawha. Though originally surveyed by William Crawford in 1771, the tract was not allotted to anyone after Washington discovered Crawford's surveys exceeded the authorized total of 200,000 acres. In February 1784, Washington wrote to Lewis to request information on his various warrants and to inform him of the 2,950 acre tract on the Great Kanawha.6 Although Washington secured Lewis's certificate of survey from November 6, 1774, it was not until a decade later on April 12, 1784, that Governor Benjamin Harris signed the grant to George Washington.

Washington was left with a remaining 2,050 acres under his warrant for 5,000 acres in 1775. In a letter written on March 27, 1775, Washington requested that Lewis apply Washington's 1,800 acres to land along the Little Kanawha. Washington also requested that the remaining 250 acres be used on Burning Springs Run, a small stream roughly forty miles above the mouth of the Little Kanawha River in Botetourt County (near present-day Charleston, West Virginia) offering to Lewis that, "in which if you choose it, you may be an equal sharer under this survey."7 A survey made on May 26, 1775, accounted for the 250 acres, and the patent for the Burning Springs tract was issued jointly to Washington and Lewis on July 14, 1780.

The Fate of the Tracts

During the American Revolution, Washington had inadequate time to dedicate to his western lands and they were almost completely disregarded. In the fall of 1784, he made a trip to investigate his claims, but new conflicts with Native American tribes prevented him from reaching the Kanawha Valley. The Constitutional Convention in 1787 and his election to the presidency in 1789 also kept Washington from acting on his renewed interest in the Kanawha.

Throughout the 1780s, Washington unsuccessfully sought to lease or sell his land on the Ohio River and other western lands. Finally, in March 1791, Washington sold both his Ohio and Great Kanawha lands to John Joseph de Barth, a French national. However, when Barth was unable to make the payments, the agreement was canceled in early 1793. In 1798, Washington leased the Round Bottom tract to Alexander McClean, who was to make annual payments in order to eventually complete the purchase of the tract for $5,870 within seven years; however, this never came to fruition.

In December 1797, Washington made terms with James Welch of Greenbrier County to assume the four Kanawha Tracts. Welch planned to lease the lands for thirty years, beginning on January 1, 1798, at the rent of $5,000 for the first year, $8,000 for the next year, $11,143 annually for the next thirty years, and $22,286 for the next ninety-nine years, or until the $200,000 total was reached. Washington also provided the opportunity for Welch to purchase the land outright in four payments of $50,000, beginning in 1804.8 However, Welch made no payments to Washington, and the Kanawha lands returned to Washington's estate after his death.

Washington's Schedule of Property enclosed in his Will and Testament outlines the Kanawha Tracts: "10,990 acres Near the Mouth West; 7276 acres East side above; 2000 acres at the Mouth of the Cole River; 2950 acres opposite of that; and 125 acres in Burning Spring, totaling 23,341 acres and valued at $200,000 in 1799." The will describes the land in detail, including a claim that “there is no richer, or more valuable land in all that Region."9

Kanawha tracts continued to appear for sale into the nineteenth century. In October 1810, the Federal Republican and Commercial Gazette in Baltimore printed an advertisement for 50,000 acres of property "adjoining the valuable lands of the late General Washington."10

Achenbach, Joel. The Grand Idea: George Washington's Potomac and the Race to the West. New York: Simon and Schuster, 2002.

"General Washington's Lands." The Historical Magazine, and Notes and Queries Concerning the Antiquities, History, and Biography of America (1857-1875).