You can learn more about music and dance during the 18th century.

Francis Hopkinson was an important early American musician and a close correspondent of George Washington. 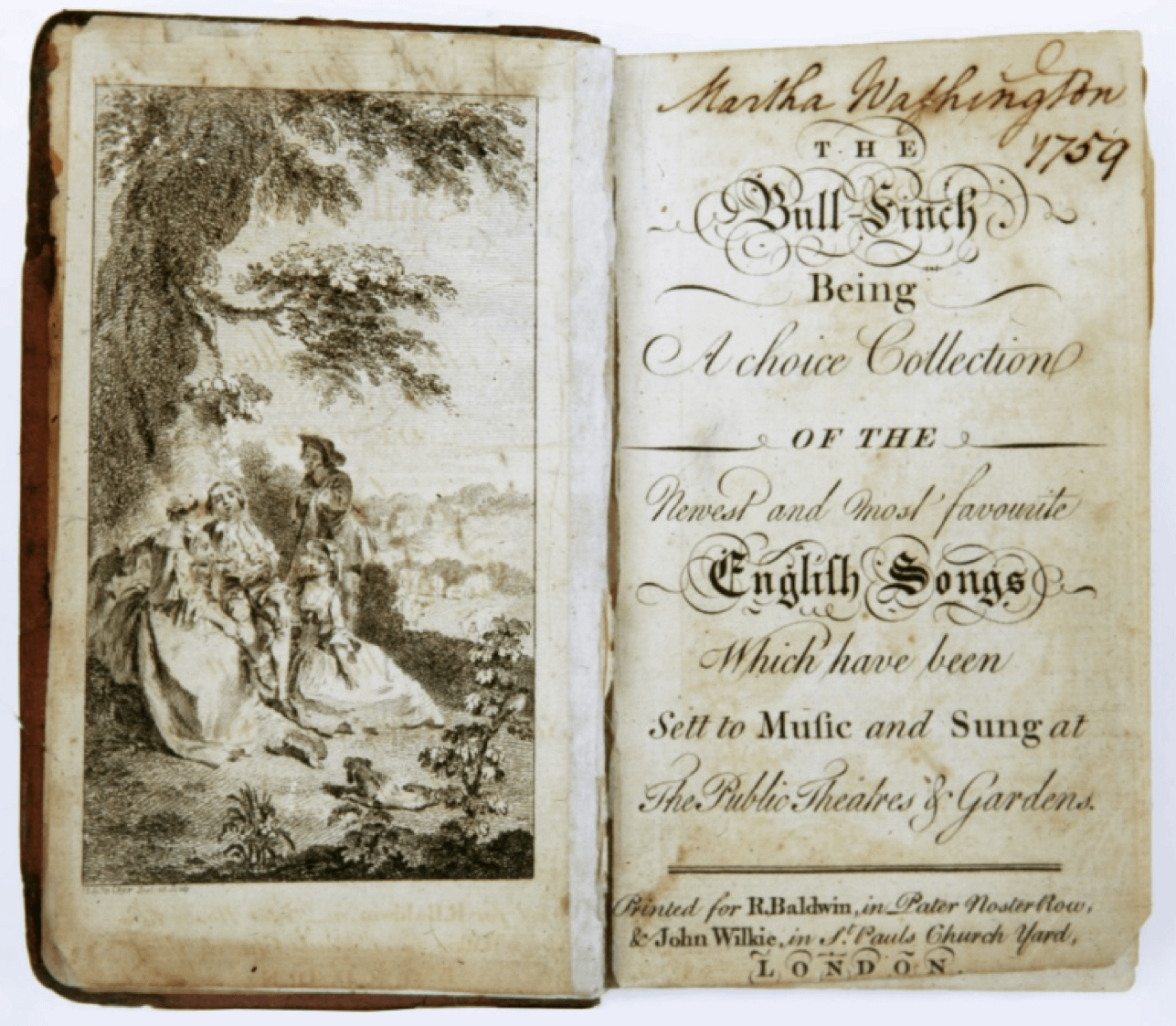 The Bull-Finch is a songster, that is, a bound collection of lyrics to songs without musical notation of their melodies.  The Mount Vernon copy, inscribed "Martha Washington 1759" on the title page in George Washington's handwriting, includes two sections, or parts, each with a first line index, bound together into a single volume.1  The songs are mostly about love and of a pastoral nature, reflecting the idealized tastes of the English elite around the middle of the 18th century.

Martha Washington ordered this book from the Custis' London agent Robert Cary in late 1758, specifying that he  "not let it be known it is intended for Exportation."2  It arrived at Mount Vernon shortly after her marriage to George Washington in January, 1759.  Exactly when George Washington inscribed her name on this book is not known, but may be assumed to be around that time.3  Another music book, Sadler's Muses Delight, had been ordered at the same time, but it was then out of print and not acquired.4

A line-by-line examination of the title page is informative.5  18th-century printers and booksellers were careful to choose the wording of their titles, which sometimes went into great detail.  Why was The Bull-Finch chosen as the main title?  Since the audience was wealthy English women, the significance of entitling it after a gentle bird as symbol of delicate, feminine, protected creature makes good sense.  By contrast, a music book for a male audience might focus on the hunt or other, masculine activities.  There is no song of that title within Martha's book, but one is close - "On a GoldFinch" (II, 75).  According to Johnson's dictionary of 1755:

BULL-FINCH. n.s. A small bird, that has neither song nor whistle of its own, yet is very apt to learn, if taught by the mouth.
Philip's World of Words.

The blackbird whistles from the thorny brake, The mellow bull-finch answers from the groves.
Thomson.6

"Being a Choice Collection" . . . of course, discrimination on the part of the editor assures that inferior songs are not included.  "of the Newest-" . . . essential to fashion is of staying up to date.  The mounting of new operas in London required attendance by the elite, and being unaware of what society deems "Most approved" would be a social faux-pas.  That this collection is based upon "English songs" is distinctive, as many 18th-century songsters include a variety of Scottish, Irish, and even Welsh songs.  This title thus encouraged an inward-looking cultural bias toward specifically English musical material, indeed a repudiation of that from the rest of the U.K. and the Continent.  Finally, being "sung at the public theatres and Gardens" reinforces the importance of music that is associated with venues appropriate to the upper-class, bringing us back to songs that are "approved" and thus follow a publicly defined body of artistic material to which one can conform in good taste.

What Kind of Music is in This Book?

Most of the songs are pastoral in nature: common themes include nature (spring time, river banks, the woods, a cooling shade, the rose, the swan); symbolic names like Cupid, Diogenes, Damon, Daphne, Delia; more generic references to unrequited love, swains, maidens, shepherds, virgins and nymphs; character names like Chloe, Kitty, Celia, Phyllis, Strephon, Phoebe, Flora, Hymen, Stella, Sylvia, Jockey, and Sally.   Some good exemplar songs are: "In a small pleasant Village, by Nature compleat" (I, 114), "Ianthe the lovely, the Joy of the Plain" (I, 99), and "On the Tay's verdant Banks a fair Maid lay reclin'd" (I, 155).

David and Ginger Hildebrand perform "God Save the King", "Of All The Simple Things", and "She Tells me With Claret"

As the title page suggests, many selections are theater songs, associated with popular stage works like the ballad opera The Beggar's Opera of 1728 ( "If Love's a sweet Passion, how can it torment" -- I, 86) and Shakespeare's The Winter's Tale, 1623 (I, 11) and a full 8 songs from John Milton's mask Comus, which debuted in 1634.  Other songs are simply humorous, such as "Matrimonial Deafness" (I, 148) and "When Orpheus went down to the Regions below" (I, 117).

Who would have used this book?

George Washington himself was not musical.  But this book raises an important question, long elusive to scholars -- how musical was Martha?  Decades ago Nicholas Tawa reported: "Unfortunately for the researcher, few letters of a personal nature, written by the Washingtons themselves, are extant, and scarcely any of those that remain discuss the music they enjoyed and might have performed."7  More unfortunately, little new has come to light since Tawa was doing his research.  More recent biographers have noted that Martha could probably sing and likely had some proficiency in playing the spinnet; some have asserted that of course Martha took lessons when young, yet no proof of this exists.8  Her musicality can be inferred from her teaching Nelly Custis to play on the spinnet and also copying out music for her daughter as well as Nelly, a task much more likely taken on by a person who understands and performs music.

In 1758 when Martha ordered The Bull-Finch her children were too young - "Jacky" (John Parke Custis) was 4 and "Patsy" (Martha Parke Custis) only 2.  So this music book must have been for Martha's own use.  The accounting of the payment for this book also proves that it was intended for Martha, not the children.9  By 1761 the Washington's ordered a spinnet (smaller version of the grand harpsichord) which arrived in 1762.  Young Jacky was encouraged to play instruments suitable to a young man, that is violin and German flute -- both of which George purchase for him,10 and Patsy no doubt played upon the spinnet up to her premature death, aged 17 in 1773.  Patsy's music books included Robert Bremner's The Harpsichord or Spinnet Miscellany, plus "A Book with the New Version of Psalms and Hymns set for the Spinnet."11  Yet The Bull-Finch is not a music book per se; it lacked that musical notation used in these two other publications, and so was probably not used by these children.

It seems likely The Bull-Finch wasn't used a great deal by anyone, for several reasons.  First, its excellent condition, now some 258 years old, suggests little wear-and-tear from use and practically no staining by finger oil.  More importantly, though, few of the songs in this large collection ever attained real popularity over time -- quite the opposite of Alan Ramsay's Tea-Table Miscellany, which carries Patsy's name and the date 1768.  But the strongest argument against frequent use of The Bull-Finch would be the difficulty in finding the actual printed music to which these songs were to be sung.  In many cases the called-for tunes are not even named.  In a day when song lyrics frequently appeared in songsters, on broadsides, and even in newspapers and magazines, it was understood that people would commonly know the appropriate tune, or at least conveniently be able to find it in print elsewhere.  For songs specified as being from specific plays or operas, the music to these was sold separately -- but the user of The Bull-Finch would need to own these other works for reference.  This collection is very different from songsters containing parodies based on widely-known common melodies -- which begs the question: rather than being a true music book, was of The Bull-Finch instead a collection of lyrics designed to be read or recited, but not sung?

To complicate things further, the great majority of these songs, especially in Part II,  have no title, rather they are simply listed by roman numeral, such as "SONG LXII."12  This explains why the indexes to each part are based upon first lines, and not titles.  Other information is sometimes offered, on a piece-by-piece basis, such as "sung by Mr. Howard" or as "sung at Vauxhall" (meaning Vauxhall Gardens -- about a fifth of all songs are thus listed).  Surprisingly, only one theatre is named, Drury Lane.  Numerous songs carry attributions as being  "set by," meaning arranged by, composers such as (Thomas) Arne, (William) Boyce, and (Henry) Purcell.

Copies of The Bull-Finch were offered for sale in newspapers in New York, Williamsburg and various other American cities, 1754 through 1783, such as in Pennsylvania Gazette of July 18, 1754, in which a merchant offers, among other books, music books and plays: "Bullfinch, a Collection of New Songs."  A song entitled "The Bullfinch," opening with the line "Says the Bullfinch, I learn every note that I hear" appears within an American songster in 1789.13  Yet, compared to the many other music books traced to colonial British America, and in much greater numbers, Martha's Bull-Finch can be considered uncommon, if not rare.

In summary, Martha's surviving music book The Bull-Finch represents the elite cultural trappings of a woman of her wealth on the eve of her second marriage.  Yet within the context of other music known to exist at Mount Vernon in Washington's time, items such as Ramsay's Tea-Table Miscellany and Bremner's The Harpsichord or Spinnet Miscellany are likely more representative of music actually played by Martha, her children, and grand-children.

1. This work went through many editions between about 1746 and 1775 and the contents varied considerably from edition to edition, as did the names of printers.  The Mount Vernon copy is a rare edition,  printed for R. Baldwin and John Wilkie in Pater Noster Row and St. Paul's Churchyard, London, respectively.  "Mrs. Washington's Song Book," Annual Report of the Mount Vernon Ladies' Association of the Union (Mount Vernon: 1964), 12, includes further detail, assigning the date of 1757 for Martha's edition.

2. Her concern was that London merchants commonly selected inferior articles, and charged higher prices, if it were known in advance they were destined for the colonies.  Judith S. Britt, Nothing More Agreeable: Music in George Washington’s Family (Mount Vernon, VA:  The Mount Vernon Ladies’ Association of the Union, 1984), 103.

3. Another, later reference to this same title survives within Guardian Accounts, 3 November 1773 [Colonial Series 9:371] but it is likely to a different copy/edition of  book:

5. Regarding the contents, in summary:

-engraving inside front, opposite title page

-part 1 contents (AN ALPHABETICAL TABLE OF THE SONGS IN THE  FIRST PART, 8 pages)

7.  Nicholas E. Tawa. "Music in the Washington Household."  Journal of American Culture 1 (Spring, 1978): 22.  Tawa also explains that wealthy girls and younger women had more time to practice and perform music than they would as they got older and their duties around the plantation increased (op. cit., 22-23).

8.  Flora Fraser, in The Washingtons - George and Martha "Join'd by Friendship, Crown'd by Love" (NY: Knopf, 2015), 46, 381, offers a good summary of Martha and Patsy's early experiences with dance and music.   Though these activities are otherwise well cited, The Bull-Finch is barely mentioned.  Joseph E. Fields' compilation "Worthy Partner" The Papers of Martha Washington, with an introduction by Ellen McCallister Clark (Westport, CT: Greenwood press, 1994), xx, xxii, assumes young Martha to have received the typical elite education in music and dance, and further adds that Patsy was accomplished in "music and needlework."  Fields doesn't offer any documentation of these things, though.  I perused his many lists and inventories of household items throughout Fields' book, also to no avail of finding direct reference to music, music books, or any instruments.

12.  Therefore I created a title index, currently in hard copy form within the record folder for The Bull-Finch, at The  Fred W. Smith National Library for the Study of George Washington at Mount Vernon.