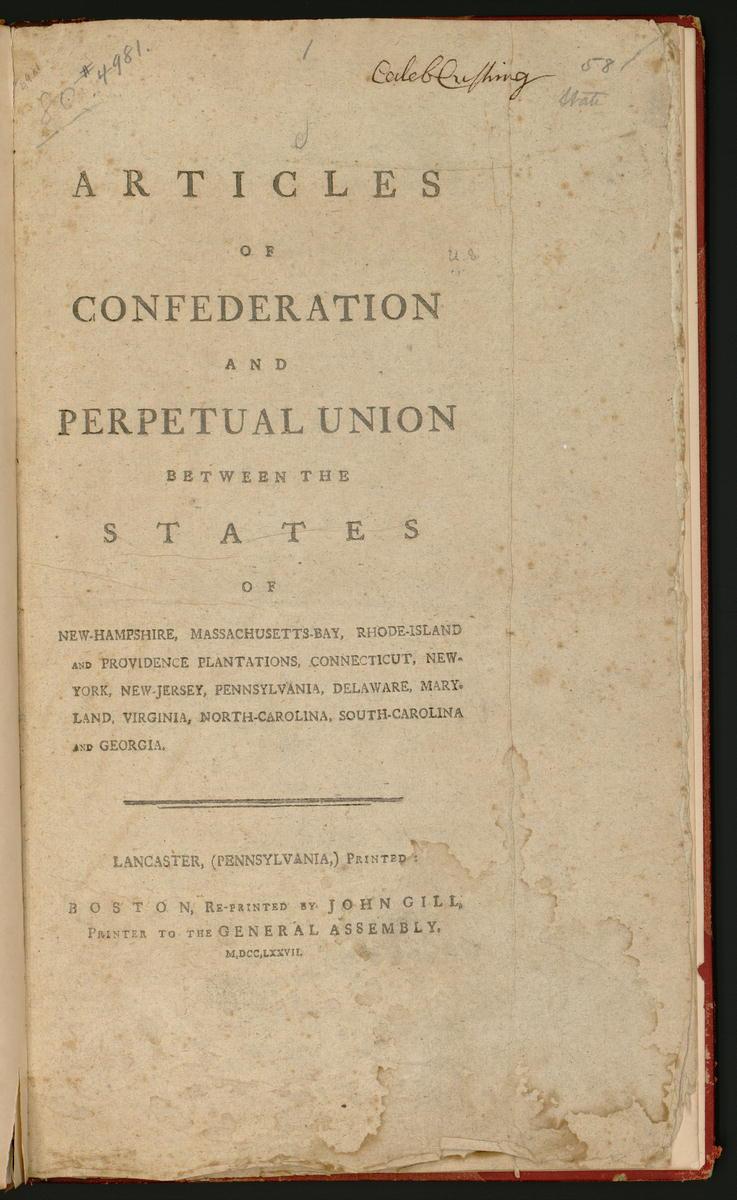 The Articles of Confederation were the first national frame of government for the United States. In force between 1781 and 1789, Great Britain’s thirteen rebellious colonies enacted the Articles during the American War for Independence to coordinate the war effort and organize the emergent American states into a loose political union. The Revolutionaries’ fear of powerful central governments led them to limit the new national government’s powers, which ironically became an obstacle for the nation after the war ended.  Although ultimately replaced by the Constitution of 1787 and the stronger federal government it created, the Articles enabled the infant United States to wage war against the British successfully, establish constitutional union as a precedent for the new republic, and expose challenges associated with the weak national government.

The Second Continental Congress began laying the groundwork for an independent United States on June 11, 1776, when it passed resolutions appointing committees to draft the Articles of Confederation and the Declaration of Independence. The Articles resolution ordered “a committee to be appointed to prepare and digest the form of a confederation to be entered into between these colonies.”1 John Dickinson, the chairman of the committee tasked with creating a confederation, worked with twelve other committee members to prepare draft articles. They presented their work to Congress on July 12, 1776, and the delegates began to debate the plan soon thereafter. Wary and conscious of repeated British intrusions on their civil and political rights since the early 1760s, the Articles’ framers carefully considered state sovereignty, the proposed national government’s specific powers, and the structure of each government branch as they wrote and debated their plan.  They sought to create a government subordinate to the states with power sufficiently checked to prevent the kind of infringements that Americans had experienced under British rule. Congress debated the Articles with these concerns in mind, and it approved the final draft of the Articles on November 15, 1777. Two days later, Congress sent it to the states for ratification. The Articles required unanimous consent from the thirteen states to take effect. Maryland became the final state to ratify the document on March 1, 1781.

The Articles of Confederation featured a preamble and thirteen articles that granted the bulk of power to the states. To some degree, it was a treaty of alliance between thirteen sovereign republics rather than the foundation for a national government. The preamble announced that the states were in a “perpetual union” with one another, but despite this seemingly stringent description, the Articles merely organized the states into a loose compact in which they mostly governed themselves.2 The first article provided the new nation with its name: “the United States of America.”3 The remaining articles detailed the states’ relationship with each other and with Congress. Article II provided that “each state retains its sovereignty, freedom and independence.” Article III, in which the states agreed to “enter into a firm league of friendship with each other,” did not negate an individual state’s sovereign status.4 Article IV specified the rights of citizens within the several states, such as affording citizens the same privileges and immunities and allowing freedom of movement. Article IV also afforded full faith and credit to “the records, acts, and judicial proceedings of the courts and magistrates of every other state.”5 Article V gave each state only one vote in Congress, ensuring the idea of equality among the states. Other articles discussed the powers granted to Congress, including the power to levy war, send and receive ambassadors, create treaties, grant letters of marque and reprisal, regulate the value of coin, and establish post offices. The final article, Article XIII, required unanimous ratification for all amendments. It also featured a supremacy clause obligating every state to follow the Articles of Confederation.

Three years after the ratification of the Articles of Confederation, many Americans including George Washington began to argue that the perpetual union was in danger.  On January 18, 1784, Washington wrote to Virginia governor Benjamin Harrison that the government was “a half starved, limping Government, that appears to be always moving upon crutches, & tottering at every step.”6 Washington and other Americans had witnessed several crises during the United States’ early years under the Articles, leading to a belief among many that preventing the nation’s collapse required revisiting the Articles. On June 27, 1786, John Jay confided in Washington that “Our affairs seem to lead to some crisis . . . I am uneasy and apprehensive—more so, than during the War.”7 In Jay’s opinion, one many leading Americans shared, the national government’s weakness led to serious problems that threatened the nation’s survival.

Congress possessed only enumerated powers under the Articles of Confederation.  It had no real power to tax, regulate commerce, or raise an army. The inability to tax created major obstacles for the new nation. Without the ability to tax the states or citizens, Congress could not raise revenue, which it needed to pay war debts to international creditors. Congress could only request money from states, and frequently, states would donate only a portion of the request or nothing at all.  Between 1781 and 1787, Congress only received $1.5 million of the $10 million that it had requested from the states.

In April 1783, Congress proposed an amendment to the Articles that would allow Congress to levy a five percent tariff on imports for no more than twenty-five years.  The revenue from the proposed tariff was specifically earmarked to pay war debts. Given the unanimous amendment process, all states had to ratify the impost for it to take effect. All states but New York had adopted the impost by early 1786.  In May 1786, New York’s legislature was willing to adopt the impost with some alterations. However, Congress did not want to accept these alterations and requested that New York remove them. When New York refused to do so in February 1787, the attempt at giving Congress the power to tax, at least in some capacity, was over.

Shays’ Rebellion coincided with the impost ratification process. Led by Daniel Shays, the rebellion was comprised of indebted farmers in western Massachusetts, many of whom were Revolutionary War veterans that had lost much of their land due to foreclosures. They could not pay the high taxes that states had imposed in order to eliminate war debt. Congress had no ability to raise its own army to suppress the rebellion, forcing the nation to rely on a privately financed Massachusetts army to put down the insurrection. This exemplified the need for not only Congress to have the ability to tax, but also the power to raise an army. Additionally, the Articles did not give Congress the power to regulate commerce explicitly. Although it could negotiate treaties and regulate all American coin, it did not have the power to negotiate complex trade treaties with foreign nations and the Articles failed to create a singular uniform currency. This lack of universal currency made trade between states and foreign nations difficult, and led to inconsistencies in currency exchange rates among the states.

Despite the Articles’ weaknesses, it also had numerous strengths. Foremost, it enabled the country to prosecute the Revolutionary War. Because Congress observed that the Articles were its de facto government until officially ratified in 1781, the Articles allowed the country to create a treaty of alliance with France in 1778. It also allowed for the negotiation of the Treaty of Paris of 1783, which ended the war.  The Articles enabled Congress to create the Departments of Foreign Affairs, Wars, Marine, and Treasury, allowed for the establishment of post offices, and had a provision that would permit Canada to join the Union in the future. Congress’s most significant legislative achievement under the Articles was its passage of a series of land ordinances in the mid-1780s: the Land Ordinance of 1784, the Land Ordinance of 1785, and the Northwest Ordinance of 1787.  These ordinances collectively provided a process for adding new and equal states to the nation, guaranteed republican governments and other rights for the new states and its inhabitants, banned slavery and involuntary servitude in the new territories after 1800, and provided for public education in the new states. Overall, the ratification of these ordinances was impressive, given the lack of unity among the states at the time and the super-majority vote needed to pass them.

Yet, the Articles of Confederation’s weaknesses triumphed over its virtues. As a result, the Annapolis Convention was called on September 11, 1786, just a few weeks after the outbreak of Shays’ Rebellion. The convention was called initially to address changes regarding trade, but the delegates realized the problems had a broader scope.  John Dickinson, who had chaired the committee to draft the Articles, was president of the Annapolis Convention.  He along with other delegates, particularly Alexander Hamilton, resolved to reconvene at a convention in Philadelphia to revise the Articles in May 1787.

Van Cleve, George. We Have Not a Government: The Articles of Confederation and the Road to the Constitution.
Chicago: University of Chicago Press, 2019.

Wood, Gordon S. The Creation of the American Republic 1776-1787. Chapel Hill and London: The University of North Carolina Press, 1998.