George Washington's first recorded order for tea dates to December of 1757, when he wrote to England seeking "6 lb. best Hyson Tea" and "6 lb. best Green Ditto."1 Washington, of course, drank tea prior to placing that order; about a month before, sick and having arrived back at Mount Vernon from the frontier to find his sister-in-law out of the house, the young bachelor sent a note to his neighbor Sally Cary Fairfax requesting some foodstuffs to get him through his illness, including "a Pound, or a smaller quantity if you can't spare that, of Hyson Tea."2 Washington continued to acquire tea throughout his life and the last known purchase was for one pound of Imperial tea the year before his death.3

Washington's enslaved people also possessed tea wares, although it is possible that they were utilized as all-purpose drinking vessels. Among the furnishings, one visitor found in a cabin on one of Mount Vernon's outlying farms were, "A very bad fireplace, some utensils for cooking, but in the middle of the poverty some cups and a teapot."5

Breakfast was generally eaten at Mount Vernon around seven in the morning during the summer or at seven-thirty in winter. George Washington's habitual meal, according to one of Martha Washington's granddaughters, consisted of "three small mush cakes (Indian meal) swimming in butter and honey" and "three cups of tea without cream.''6 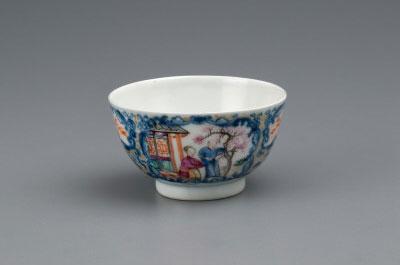 Guests at Mount Vernon also mentioned tea being served at breakfast. Benjamin Henry Latrobe recorded in his journal that, "Breakfast was served up with the usual Virginian style. Tea, Coffee, and cold and broiled Meats."7 In January of 1802, two years after George Washington's death, Manasseh Cutler and his friends were served a specially prepared breakfast by an enslaved cook late one morning at Mount Vernon. After describing the foods on the table, the minister noted, "At the head of the table was the tea and coffee equipage, where she [Martha Washington] seated herself, and sent the tea and coffee to the company."8 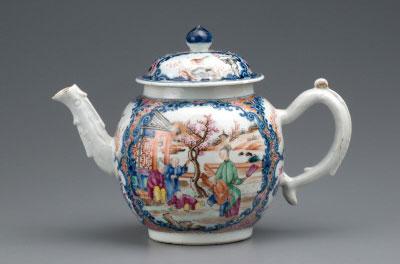 One of the more charming references to tea at Mount Vernon is given in the memoirs of prominent land speculator and world traveler Elkanah Watson, who visited the Washingtons in January of 1785. Watson recollected:

"I was extremely oppressed with a severe cold and excessive coughing, contracted by the exposure of a harsh whiter journey. He [George Washington] pressed me to use some remedies, but I declined doing so. As usual after retiring, my coughing increased. When some time had elapsed, the door of my room was gently opened, and on drawing my bed-curtains, to my utter astonishment, I beheld Washington himself, standing at my bed-side, with a bowl of hot tea in his hand. I was mortified, and distressed beyond expression. This little incident, occurring in common life with an ordinary man, would not have been noticed; but as a trait of the benevolence and private virtue of Washington, it deserves to be recorded."9