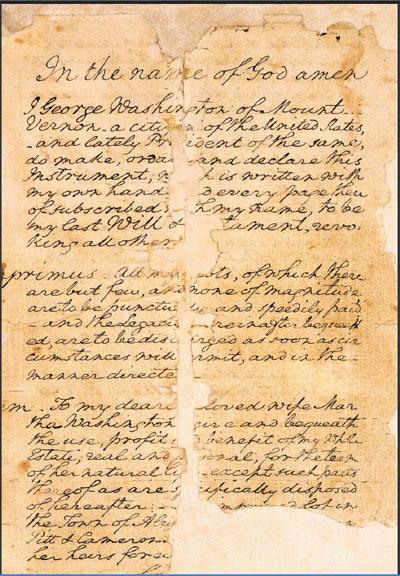 At the time, 317 enslaved people lived and worked at Mount Vernon. However, of those individuals, Washington legally owned 123 people. Because of Virginia law, Washington was only able to liberate those enslaved people that were his personal property. At Mount Vernon there were also 41 people rented from nearby plantations and 153 peopled owned by the estate of Martha Washington's first husband, Daniel Parke Custis. Enslaved people had come into Martha’s possession for her lifetime use through her late first husband and were to revert to her grandchildren's legal property after her death. Washington, as her second husband, could control and profit from these people, but he accepted it was “not…in my power…to manumit them.”

Although people enslaved by Washington himself could have been freed upon his death on December 14, 1799, he chose to delay their release until Martha’s death for two reasons: the stability of his wife’s finances and the enslaved community was “intermixture by Marriages.” He wanted to avoid the “most painful sensations, if not disagreeable consequences” over the separation of families—for the enslaved and for Martha. Washington made one exception for his longtime manservant William Lee, to whom he granted “immediate freedom” and an annuity as a reward for his “faithful services during the Revolutionary War.” Based on Virginia law, those who could not effectively care for themselves (the elderly, infirm (including Lee), and the young) could continue to be provided for by the estate; in addition, youths would also be given a basic education and released at age twenty-five.

As evident by the will’s initial concealment, Washington’s language reflected his anxiety over the manumission’s incendiary nature. Fearing subversion, he commanded that the will’s terms had to be followed “without evasion, neglect or delay” and that he “expressly forbid the Sale, or transportation out of the said Commonwealth, of any Slave I may die possessed of, under any pretence whatsoever.”2 On January 1, 1801, Martha voluntarily freed all of her husband’s enslaved people early. Washington’s widow seemingly feared that otherwise she would be murdered to enact the will’s terms.

Despite the lack of immediate manumission or official presidential policy, Washington’s will and its unconditional emancipation illustrated the personal commitment he had against slavery. Though its existence did not trigger an instantaneous societal conversion on slavery, its clauses preventing the removal of enslaved people from Virginia also went drastically against the prevailing abolitionist ideology of repatriating enslaved individuals to Africa. Instead, based on their status in the will, Washington boldly suggested that America had the potential to become home for those formerly enslaved.

Furstenberg, François. In the Name of the Father: Washington’s Legacy, Slavery, and the Making of a Nation. New York: Penguin Books, 2006.

Wiencek, Henry. An Imperfect God: George Washington, His Slaves, and the Creation of America. New York: Farrar, Stratus, and Giroux, 2003.