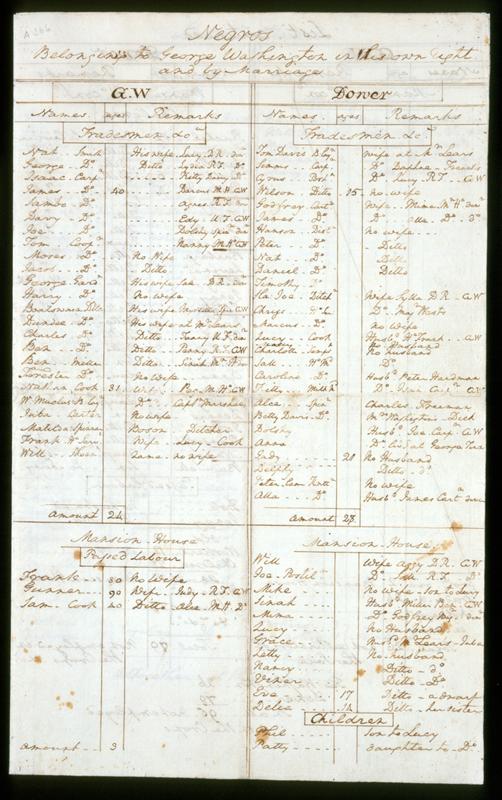 The marriages were not, however, recognized or protected by the legal system, as enslaved people were considered property and not persons in the eyes of the law. As a result, enslaved people were unable to enter into legal contracts. Of the ninety-six married enslaved people on the five farms at Mount Vernon in 1799, only thirty-six lived in the same household as their spouse and children. Another thirty-eight had spouses living on one of Washington's other farms, a situation related primarily to work assignments as most lived at the farm where they worked.

In 1799, twenty-two of those enslaved at Mount Vernon married individuals who lived and worked on other plantations. There is no indication that marriages were arranged. In order for these couples to have met and formed attachments that would eventually lead to marriage, there had to have been a certain amount of freedom to travel from farm to farm within the plantation or to the plantations of other owners. With Sunday as the weekly day off, the individuals involved in long-distance marriages could see one another on Saturday night and during the day on Sunday, as well as during other holidays throughout the year.

Marriages produced a significant number of children. At least 293 babies were born to enslaved women at Mount Vernon between 1750 and 1799. In 1799, nearly three-quarters of these children lived in households headed by single parents who were almost invariably female. With their mothers away from home for most of the dawn-to-dusk workday, the children seem to have been largely supervised by one another. The young children spent a great deal of time playing together and may have been assigned small jobs for an overseer or chores for their own families. Depending on the rate at which they grew, these children were given a formal work assignment when they were between eleven and fourteen years old.