The Southern Strategy was a British plan to win the Revolutionary War by concentrating their forces in the southern states of Georgia, South Carolina, North Carolina, and Virginia--where they believed the concentration of loyalists would be an advantage.

Washington described his Grand Strategy as a plan to combine American and French forces to retake New York and win the war. However, after the defeat at Savannah, Washington modified his plan and implemented the Grand Strategy in Virginia. 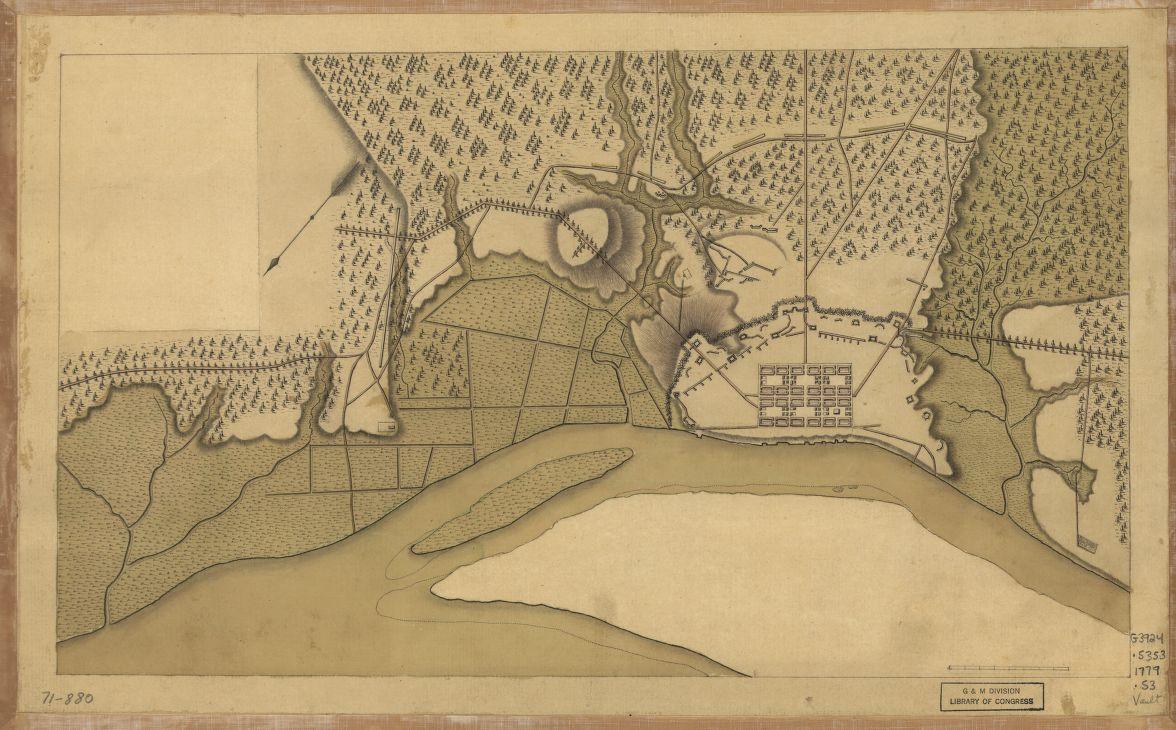 The Siege of Savannah (September 23 to October 18, 1779) refers to the failed attempt by American and French forces to retake the port city from its British occupiers. It was one of the costliest battles of the Revolutionary War in terms of casualties. The multinational forces on the revolutionaries’ side included naval and land forces under Count Charles Henri d'Estaing of France, Irishmen of the Dillon Regiment commanded by Colonel Arthur Dillon, a mixed force of cavalry called Pulaski's Legion led by Polish aristocrat Casimir Pulaski, and General Benjamin Lincoln’s force of regulars and militia for a total of about 7,000 men. British defenders under General Augustine Prevost, numbering about one-half of the American-French force, included Highland regulars, Hessian mercenaries, American Loyalists, a few Native Americans, and formerly enslaved African Americans seeking freedom through enlistment.

Savannah lies about seventeen miles from the river’s mouth on the first firm piece of ground inland from the Atlantic. The city was an important Atlantic port, serving plantations in the area as a transportation and mercantile hub. It was also a key strategic point that provided a maritime power like Britain with a base easily accessed from the sea and from which it might reconquer the rest of Georgia and threaten South Carolina.

By late 1778, British leaders had concluded that the war in the north was a stalemate and began to shift the focus of their war against the American revolutionaries to the south where they believed that large numbers of colonists remained loyal supporters of the London government. Having failed to take Charleston in 1776, the British focused on the smaller port of Savannah, and a force of 3,000 soldiers under Lieutenant Colonel Archibald Campbell captured Savannah on December 29th from American Major General Robert Howe and his small force of about 700 to 900 men.

In April 1779, General George Washington pressed John Jay, President of the Continental Congress, to mobilize the American navy against the British in Savannah. “[W]hat are the reasons for keeping the Continental frigates in port?” he asked, adding

I am not sure but at this moment, by such a collection of the naval force we have, all the British armed vessels and transports in Georgia might be taken or destroyed, and their troops ruined. Upon the present system, our ships are not only very expensive and totally useless in port, but sometimes require a land force to protect them, as happened lately at New London.1

Washington also sought assistance from the French allies. He proposed a combined American-French operation against 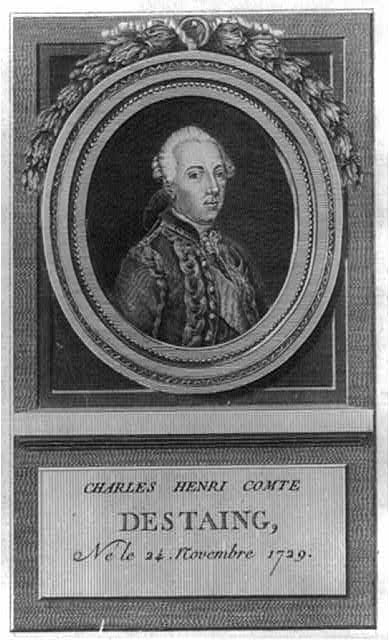 British forces to the French minister, Conrad Alexandre Gérard de Rayneval, using Count Charles Henri d'Estaing's French naval squadron then operating in the Caribbean. If this force could not join a renewed attack on Manhattan that had failed the previous year, Washington wanted d’Estaing to "proceed with his squadron immediately to Georgia, where, in conjunction with the American troops, there is every reason to believe he would with great facility capture and
destroy the enemy’s fleet and army...."2 Shortly afterward, Washington ordered Brigadier General Charles Scott to take three Virginia regiments to reinforce Maj. Gen. Benjamin Lincoln, commander of the American army in the south.3
Washington laid out his thinking to Gouverneur Morris, an ally in the Continental Congress, on May 8th, 1779.

The relief of the Southern States appears to me an object of the greatest magnitude.... I feel infinite anxiety on their account. Their internal weakness, disaffection, the want of energy, the general languor that has seized the people at large, makes me apprehend the most serious consequences. It would seem, too, as if the enemy meant to transfer the principal weight of the war that way.

British movements in the theater threatened Charleston, and, he continued, if should they prove successful, they “will leave the enemy in full possession of Georgia, by obliging us to collect our forces for the defence of South Carolina.” If the proposed combined operation with the French “should fail,” Washington wrote, “our affairs, which have a very sickly aspect in many respects, will receive a stroke they are little able to bear.”4

Despite Washington’s request, d’Estaing stayed in the West Indies until he received news that Savannah had been weakened by Brigadier General Augustine Prevost’s expedition to Charleston in June 1779. Sailing for the mainland in August, d’Estaing sailed touched the Georgia coast briefly in early September to establish communications with General Lincoln. To Lincoln, d’Estaing expressed his desire, in view of the season, for a rapid joint strike on Savannah. He and Lincoln agreed to meet and join their forces in front of Savannah on September 17, 1779.

Their first sighting of the French warships near Tybee Island by the British prompted Prevost on September 4th to send orders “to all the outposts to hold themselves in readiness to join” his forces in Savannah.5 Despite the scare, d’Estaing did not begin to land his force until September 12th. Then he began to put 4,000 soldiers ashore at Beaulieu Plantation on the Vernon River about 10 miles south of the Savannah waterfront. The debarkation completed on the 15th, the French took up positions a few miles south of Savannah.

On September 16th, d’Estaing sent a demand to General Prevost to surrender, but Prevost requested and was granted twenty-four hours in which to respond. Had d’Estaing attacked immediately, it is probable that Savannah would have fallen. As events unfolded, Prevost not only gained the twenty-four hours, he also gained the time needed for crucial reinforcements led by Lieutenant Colonel Maitland to arrive from Beaufort, South Carolina. This forced the French and Americans to undertake siege operations that afforded Prevost another—invaluable—two weeks to prepare. 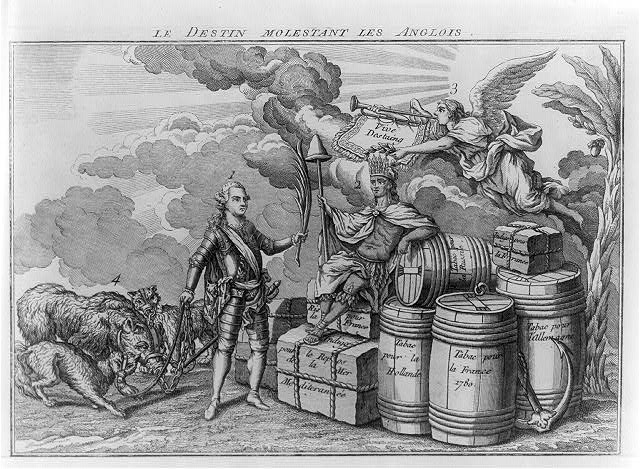 French warships and artillery opened fire on the city on October 4th, and the shelling continued until October 8th. At that point, d’Estaing’s engineers told him that it would take more time to extend their works to the British lines than he was prepared to concede. The operation had already consumed more time than he had anticipated and his concern for the West Indies and pressure from his captains, who were increasingly worried about lingering on a coastline exposed to storms and to a sudden approach by the British, caused d’Estaing to decide on an immediate assault. General Lincoln agreed to the plan, and dispositions for an assault early on the morning of October 9th were arranged.

Savannah overlooks the Savannah River and Hutchinson’s Island from high ground on the river’s south bank. The river, running generally northwest to the southeast, is not itself very wide. However, except immediately in front of Savannah, a broad belt of marshlands borders the lower reaches of the river on both sides. In 1779, large bodies of men and their supporting trains could only cross those marshy strips along a few narrow causeways. On the south bank, with the exception of the Augusta Road that approached Savannah from upriver and entered the city at its southwest corner, the main roads into Savannah—the Great Ogeechee Road, White Bluff Road, and the Thunderbolt and Sea Island Road—converged on the city across slightly lower terrain to the south that was occupied by the French and American armies. Numerous marshlands and rivers guarded the eastern approaches to the city, and the low boggy area west of Savannah was cut by a stream, Musgrove Creek, that emptied into the river just above the town.

The British defenses of Savannah consisted of two concentric lines of works that formed a semicircle around the city’s south side and touched the river on both ends. Several strong points, including the Spring Hill redoubt across the Augusta Road, constituted the first line of the defenses. This line was supported by additional works to its rear and screened in front by an abatis of downed trees. In front of these fortifications, the French and Americans constructed only a partial line of circumvallation on the southeastern approach to the city. The allies’ main attack was planned to strike the British defenses on the British right prior to sunrise on the 9th. As the British commander noted in his report, “The ground towards both our flanks, notwithstanding all a good engineer could do, was still favorable to the enemy. On the right a swampy hollow brought him under cover to within fifty yards of our principal works, on some points still nearer.”6 This was the area selected by the allies as the focus of their attack.

The main body of French soldiers, led by d’Estaing, aimed at the Spring Hill redoubt. Farther left, General Lincoln advanced with two American columns, the leading one under Lieutenant Colonel John Laurens and the second under Brigadier General Lachlan McIntosh, covering the flank of the main French formation. Colonel Arthur Dillon led his Irish troops into the line closest to the river beyond Laurens’ soldiers. Behind the infantry on the left, Polish count Casimir Pulaski’s cavalry legion waited to exploit a break in the British lines. The remaining American formations under Brigadier General Isaac Huger and Brigadier General Andrew Williamson deployed to the British left to conduct feint attacks at the eastern end of the British fortifications. If they encountered weakness, they were ordered to exploit it. A reserve advanced part way after the attacking force. The allies scheduled their assault to begin before sunrise, but, despite a covering fog, delays and confusion kept them from advancing on time. When they finally moved forward, they were exposed to the fire of the British defenders, and disorder reigned in the attacking ranks. Despite repeated attempts and heavy losses, the allied failed to secure their objectives. As d’Estaing recorded afterward, “The action did not last longer than an hour; it was very violent. The enemy...as we learned later, had gathered the greater part of their force around the Spring Hill redoubt; and it appears certain that two American deserters alerted them about the point of attack the day before. That no attention at all was paid to the two feint attacks from the trenches is even more reason for thinking so.”7

After the allies retreated, they requested a truce, which was granted, to tend to the wounded and bury the dead. General Prevost put the defender’s casualties at fifty-five and estimated the French and American losses at something between one thousand and twelve hundred killed and wounded, numbers that accord with French reports.8 In the event, Gen. Washington’s fears were realized. The failure of the combined efforts of Lincoln’s troops and the French forces to retake the port of Savannah from the British soon led to a British expedition against Charleston, South Carolina, and the surrender of that city in 1780. The southern colonies would remain in British hands until the peace.

Lumpkin, Henry. From Savannah to Yorktown: The American Revolution in the South. Columbia, SC: University of South Carolina Press, 1981.

Mahan, Alfred Thayer. The Major Operations of the Navies in the War of American Independence. New York: Little, Brown, and Company, 1913.