The Crown's attack on Charleston was only part of a larger plan to encourage Southern Tories to rise up against Congressional authority. 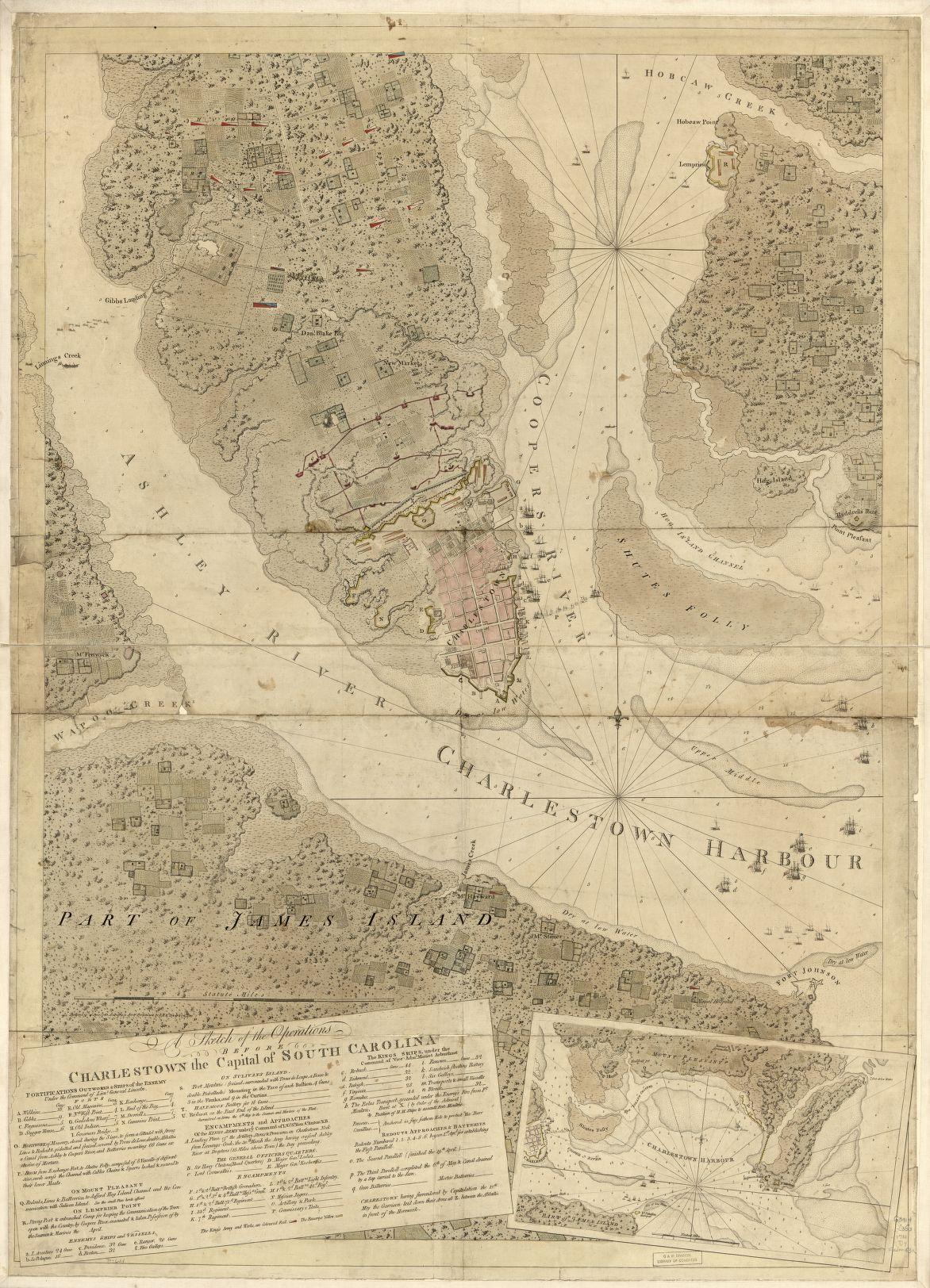 The 1780 siege of Charleston was a decisive success for the British during the War of the American Revolution as they shifted their strategy to focus on the southern theater. Capture of the city and its harbor gave them a vital base from which to conduct operations in their attempt to rally the support of American Loyalists and reconquer the southern states. Conversely, the loss of Charleston was a painful blow to the American cause, made even worse by the capture of over 2,500 Continentals and numerous vital weapons and supplies.

The stalemate in the northern theater of the war after 1778-1779 led the British leadership to renew its interest in the southern theater. The British remained convinced that the erstwhile southern colonies were full of American Loyalists waiting for British authorities to liberate them from Patriot rule. Patriot forces had repelled attempts to gain a foothold in the southern colonies at Moore’s Creek Bridge and Charleston in 1776, but the successful capture of Savannah, Georgia, at the end of 1778 had restored British hopes that Charleston could be captured and that this success would swell Loyalist support for the British campaign to subdue the rebellion.

The Americans, meanwhile, knew that Charleston was a likely target for the British following the capture of Savannah. Major General Benjamin Lincoln was given command of the defense of Charleston in September 1779. In his initial instructions to Lincoln, General George Washington warned him of the impending British attack, but expressed his regrets that he could not offer any military assistance because of the need to maintain adequate Continental forces around the northern British stronghold in New York City.1 When Lincoln arrived, many of the fortresses defending Charleston’s harbor were in disrepair, and the fortifications on its western and southern sides (the sides facing the city’s landward approaches) were unfinished. Lincoln and his subordinates worked diligently to repair the fortifications around the city and the Continental Army leadership beseeched the southern states to provide men and materiel to defend Charleston. 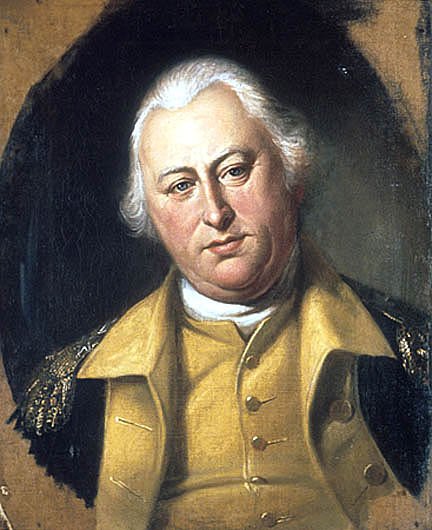 and German soldiers departed New York just after Christmas in 1779 and made its way through stormy winter weather to the Savannah River by the end of January 1780. The force then maneuvered up the coast and over land routes to approach Charleston from its weaker southern and western sides, bypassing the seaward defenses at Fort Moultrie that had rebuffed the 1776 British assault.

American partisan forces under commanders like Francis Marion harassed the British forces, and Lincoln dispatched a force of 350 dragoons and militia under Brigadier General Isaac Huger to the crossroads at Monck’s Corner 30 miles north of Charleston to keep his lines of communication open. There was little else the American forces could do. Washington had advised to Lincoln to abandon the city to save his force of Continentals if necessary, but the civilian leadership of Charleston convinced Lincoln to stay. At the end of March, British forces under Earl Charles Cornwallis crossed over the Ashley River about 14 miles northwest of Charleston and on April 1, 1780 British forces began digging siege lines across the neck of the Charleston peninsula. Clinton hoped that a methodical siege would capture Charleston and its harbor intact, earning the loyalty of the civilian population and facilitating British use as a base of operations.

The American defenders fought the encroaching British siege works, even resorting to loading cannon with metal refuse and broken glass to conserve meager ammunition stocks. On April 9, the British ships supporting the siege forced their way into the harbor past Fort Moultrie and began shelling the city. Commodore Abraham Whipple, the commander of the small American naval force, scuttled his fleet to obstruct the harbor. At the urging of Charleston’s civilian leaders, Lincoln refused British demands to surrender, but a few days later the South Carolina government secretly fled the city. On the evening of April 13, a British cavalry raid led by Lieutenant Colonel Banastre Tarleton routed Huger’s forces at Monck’s Corner, capturing 400 horses and tightening the British stranglehold on the city. The next day, British siege guns began firing on Charleston from the north. 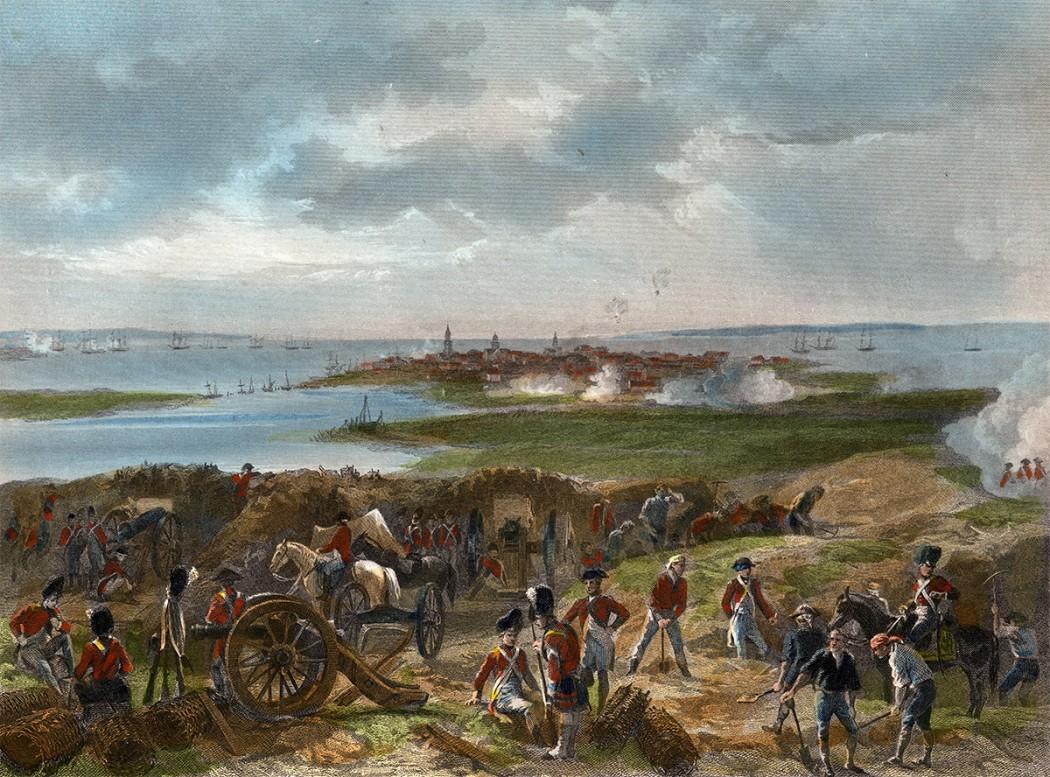 On April 22, Clinton refused Lincoln’s proposal to surrender Charleston in exchange for allowing the Continental forces defending it to go free. Two days later, an American sortie into the first row of British entrenchments inflicted 50 casualties and netted a dozen prisoners, but did little to halt the siege. Well aware that Charleston’s capture was imminent, Lincoln requested permission from Charleston’s remaining civilian leadership to evacuate his force of Continentals. The city’s leaders responded by threatening to destroy any boats used in an evacuation attempt. As April turned to May, Fort Moultrie and its garrison of 200 defenders surrendered to the British. On May 11, the British began firing upon Charleston with heated shells, resulting in several fires, and Charleston’s civilian authorities at last urged Lincoln to surrender to the British, regardless of the terms.

The surrender terms were indeed harsh by the standards of the day. Lincoln and his command were refused the honors of war, and many of the 2,500 Continentals who surrendered would not survive their imprisonment. The British captured over 300 cannons and about 6,000 muskets, along with vast stores of gunpowder. Overall, the casualties in the siege were relatively light, with fewer than 300 killed and wounded on either side; an accidental explosion in a magazine after the surrender killed twice as many as died in the actual siege.

The results of the British victory, though, were decisive. The British had captured the largest city and best harbor in the southern theater and proceeded to follow up this triumph with victories over other American forces at the Waxhaws and Camden. Their success seemed to rally much of South Carolina’s population to the Loyalist side. Washington and the Americans struggled to find an effective way to counter these setbacks, and it would take over a year of bitter partisan warfare and hard campaigning by Major General Nathanael Greene and others to thwart the British campaign in the south.

Pancake, John S. This Destructive War: The British Campaign in the Carolinas, 1780-1782. Tuscaloosa, AL: The University of Alabama Press, 2003.