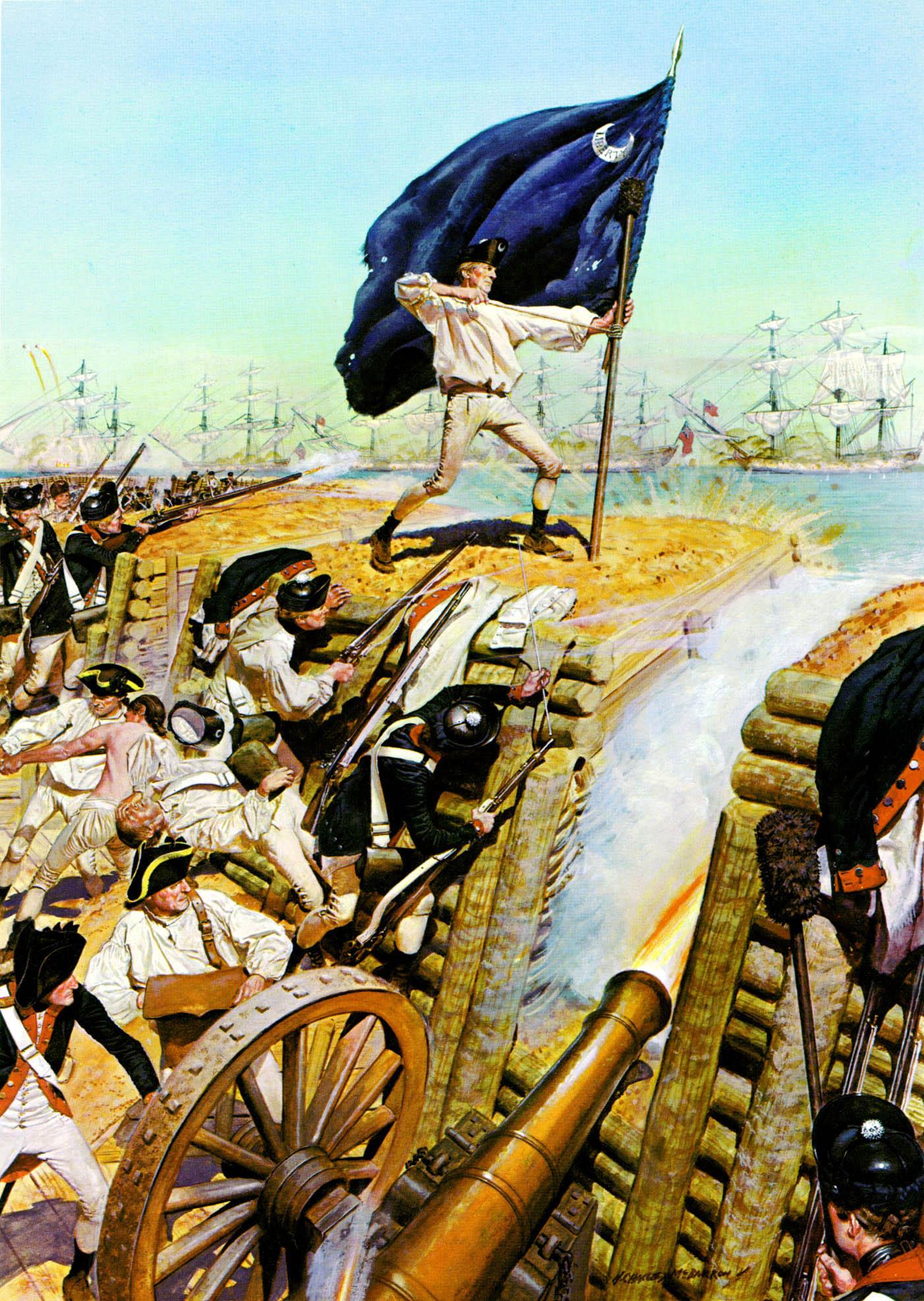 The 1776 Siege of Charleston, South Carolina, was a short but important military episode in the early years of the American Revolution. A small American Patriot force defending Charleston under the overall command of Major General Charles Lee successfully repelled a combined British assault force of 2,900 soldiers and seamen under Major General Sir Henry Clinton and Commodore Peter Parker on June 28, 1776.  American use of a fortification on Sullivan’s Island played a critical role in the victory, as the fort dominated the narrow channel into Charleston Harbor and prevented any British ships from entering.  The Patriots’ victory helped increase support for independence among South Carolina’s population and the British did not return to the Southern Colonies in force for nearly three years.

The British attempted the siege of Charleston in 1776 as part of an overall strategy to use the major ports of Georgia, South Carolina, and North Carolina as bases to rally American Loyalists to defeat the Rebellion in the Southern Colonies.  The Royal Governors of these colonies had convinced British authorities that a show of force by a few regiments of British Regulars would be enough to rally large numbers of Loyalists to support efforts to move inland and defeat the American rebellion in the hinterlands.  At worst, capture of a port would allow a British base from which the Regulars and smaller numbers of Loyalists could conduct raids inland.

The American Patriots, meanwhile, well understood the importance of Charleston as the largest port and city in the Southern Colonies.  When General George Washington arrived to New York City following the expulsion of British forces from Boston in March of 1776, he dispatched Lee, a former British Regular, to assume overall command of the Patriot defense of Charleston.  Washington felt Lee’s experience would provide a vital morale boost to the defenders.  Defense of Charleston and its harbor centered on a fortification constructed of sand and palmetto logs on Sullivan’s Island. Fort Sullivan, commanded by Colonel William Moultrie, dominated all of the narrow entrance channels through the sand bar at the mouth of Charleston Harbor.  Upon his arrival, Lee ordered the construction of additional fortifications throughout the islands and inlets around Charleston to augment Fort Sullivan.

The British force under Clinton and Parker consisted of a mix of regiments that had been evacuated from Boston and others newly arrived from Europe. Clinton had initially intended to land in North Carolina to link up with a force of American Loyalists, but the Patriots' decisive defeat of several hundred Loyalists at the Battle of Moore’s Creek Bridge in February of 1776 meant that a major landing in North Carolina was impracticable. After much delay off the coast of North Carolina, the combined British force arrived off Charleston on June 4, 1776.  Parker dispatched naval reconnaissance elements who reported that the city was “virtually undefended” and “could be easily taken.” The British fleet landed soldiers on an island north of Fort Sullivan beginning the 7th of June, but American defenders resisted all attempts for them to move southward. 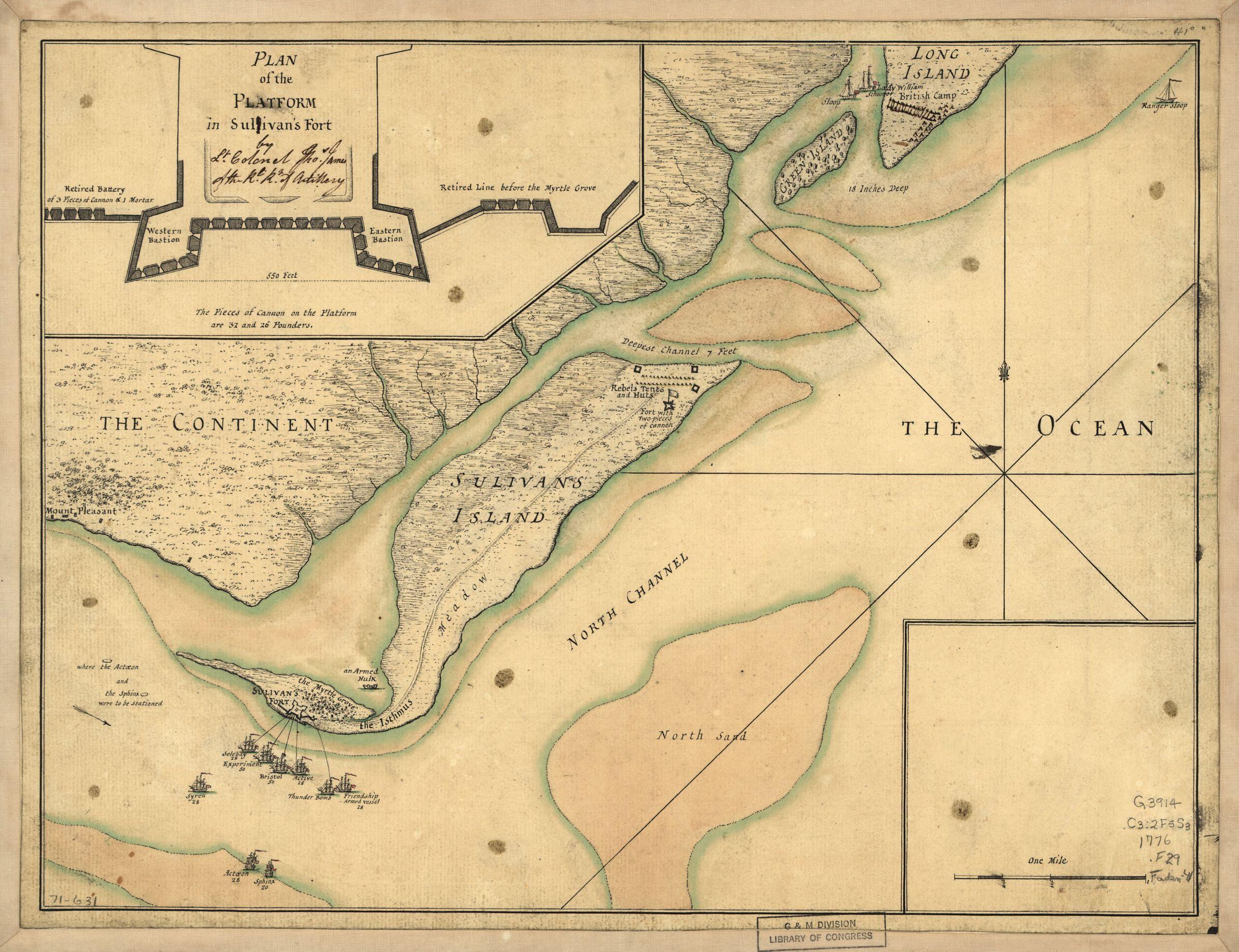 Finally, on June 28th, the British fleet attempted to force the entrance to Charleston Harbor.  Despite an overwhelming advantage in cannon, the British ships were unable to silence the guns in Fort Sullivan, despite the fact that the British had ten times as many cannon as the Patriots did.  The spongy consistency of the palmetto logs used in the fort’s construction absorbed much of the shock of the projectiles.  The sandy and swampy terrain around Fort Sullivan also mitigated any serious damage by naval gunfire.  The American guns, meanwhile, damaged many British ships.  Moultrie’s decision to concentrate firepower on the British flagship resulted in significant damage and injured Parker.

Despite the failure to suppress the American defenders in Fort Sullivan, three British ships still attempted to force the passage through the harbor.  All three ran aground on a shoal in the harbor entrance.  The crews were able to save two ships, but the crew of the third could not get it unstuck.  Unable to force entrance into the harbor and taking significant damage as night fell, the British commanders ordered the one ship still aground burned to prevent capture, and recovered the forces that had been landed north of Sullivan’s Island.  The British fleet withdrew and sailed north.  Clinton’s command would soon support the successful British campaign to capture New York City, but its attempt to capture Charleston had failed.

Some historians label the successful defense of Charleston Harbor in June of 1776 as the first major American victory of the American Revolution.  The stunning victory at Fort Sullivan, renamed Fort Moultrie in honor of its commander, certainly provided a vital morale boost to the Patriot cause, especially when compared to Washington’s serious setbacks in and around New York City later that year.  Historians argue that the victory likely increased support for the decision by the South Carolina delegation to the Continental Congress to vote for independence on July 2nd, as there had been limited support for independence before the battle.  The 1776 Siege of Charleston also provided valuable military experience for Francis Marion and Thomas Sumter, who would later play critical roles as partisan fighters during the long, bitter campaign for the Carolinas from 1780-1781.

It would be 1780 before British forces returned to Charleston and attempted another siege.  When they returned, they approached Charleston from the landward side, avoiding Fort Moultrie, and successfully invested and captured the city and its entire Continental garrison.