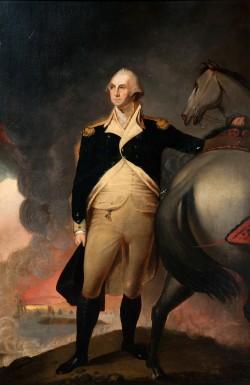 In June 1775, George Washington found his thoughts turning to Mount Vernon. He had promised his wife Martha that he would return soon from the Continental Congress in Philadelphia. But his fellow delegates had just elected him the Commander-in-Chief of the Continental Army, and he was bound for Boston. Militia companies trapped the British on April 19, 1775 following the battles at Lexington and Concord.

Washington was charged with forming these companies into an army and directing the siege of Boston. Knowing that he would be away for many months, Washington wrote to his wife. "I shall feel no pain from the toil or the danger of the campaign," he confessed. "My unhappiness will flow from the uneasiness I know you will feel being left alone." Washington worried that Virginia's Governor Lord Dunmore would attack his plantation and even imprison his wife. But still he had no choice but to obey the "kind of destiny" that had given him this command and head for Boston.1

Upon arriving in Cambridge in early July, Washington proposed an attack on Boston. However, his officers were against it. They argued that the British were still receiving supplies by sea. They urged Washington to wait until the waters around Boston were frozen. Washington sent an army instead to Quebec. He also ordered Henry Knox to march to Fort Ticonderoga and bring back the post's artillery. While the attack on Quebec failed, Knox returned to Cambridge in January 1776 with fifty-nine cannons.

Even with the waters around Boston frozen, Washington's officers refused to attack the city. A frustrated Washington looked for another way to dislodge the British. On the evening of March 4, 1776, he directed his men to take the cannon from Fort Ticonderoga up Dorchester Heights south of the city. Washington also ordered his troops in Cambridge to fire on the redcoats. The British blasted the American guns in Cambridge throughout the night, only to discover the many cannons pointed at them from Dorchester Heights on the following morning. The British Commander General William Howe remarked, "My God, these fellows have done more work in one night than I could make my army do in three months."2

Howe sent troops up Dorchester Heights to dislodge the guns, but a snowstorm prevented the assault. Fearing a brutal bombardment, he decided to leave Boston. On March 17, 1776, known afterward as "Evacuation Day," 11,000 redcoats and hundreds of Loyalists left the city by boat. Washington marched into Boston on March 18, but there was little time for rejoicing. He rightly suspected that the British would head for New York City. As he prepared for the next test of battle, one of his few comforts was the fact that his wife Martha had joined him in November. They would go together to New York, hoping that no harm would come to their beloved Mount Vernon.