The prominent placement of the servants' hall as a flanker to the mansion, its mimicking of the mansion by exhibiting rusticated siding on the facades facing the entrance circle, and its connection to the mansion by the open-sided colonnades, marks the building's importance within the scheme of the overall plantation layout at Mount Vernon. 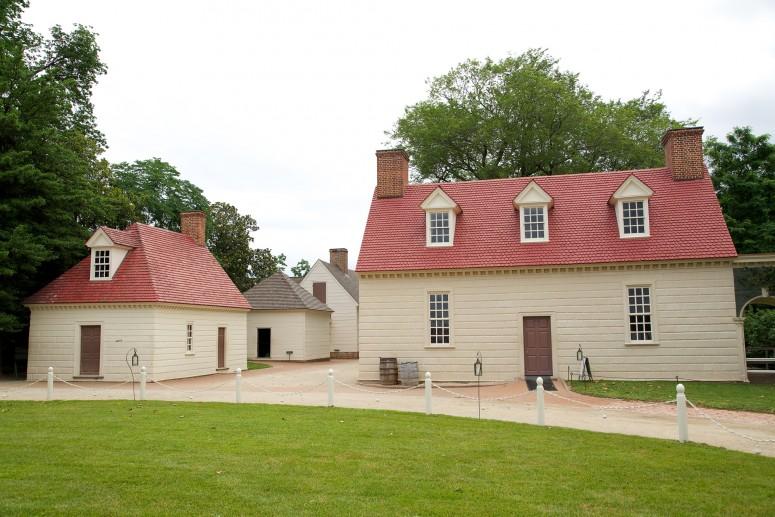 The servants' hall is remarkable for its unusual function as well. Once the final design was agreed upon, it was always referred to in George Washington's writings and in other plantation records as the "Servants Hall." With the exception of a three-year period when plantation manager William Pearce took up residence, the Servants' Hall was reserved exclusively for the use of the visitors servants.

That such a large and prominent structure was reserved only for the occasional use of the servants of visitors is remarkable. At twenty by forty feet in dimension and with two usable floors, the servants' hall was larger than the great majority of the houses lived in by Washington's fellow Virginia planters. The building's interior finishes were also of a high quality. With a tile floor, glazed windows, both a base board and chair rail, plastered walls, and substantial brick fire places in each of the four rooms, it represents a step up in comfort for most Virginians, let alone for servants.

Washington's ability to devote a significant proportion of resources to a building that may have been unoccupied most of the time testifies to his relatively great wealth. But it also may reflect his ambition to lay claim to the status of membership in the highest level of the Virginia gentry. The significance of the possession of such a specialized structure would not have been lost on the gentlemen whose slaves periodically resided there.

The servants' hall was erected in 1775 as part of George Washington's extensive rebuilding and expansion of his home and its associated outbuildings. The previous year he had embarked upon an ambitious building program that eventually would nearly double the size of the mansion. The structure as originally planned had two exterior doorways on the south facade, each entering directly into one of the two first floor rooms. The two doorways were a feature that troubled Lund Washington—Mount Vernon's manager, and a cousin of George Washington—nearly from the beginning of construction.

In the first letter sent to George Washington referring to the structure, Lund Washington observed that: "I find that the Wash House is framed to have two doors in front – both together one to open in each Room, Stone says you directed him to do so – it will differ from the Kitchen which shews but one Door in Front."1 In a letter dated October 15, 1775, Lund expressed a desire to change the design: "I think the House … would have lookd more Uniform in its outward appearance, to have had one Door in the midle as the Kitchen opposite has & the other in the Gable End."2 Lastly, in a letter dated November 5, Lund stated that, "I have had a great Inclination to alter the Doors, but am unwilg to make an alteration in anything you have directed – it will not look well being different from the Kitchen."3

Because most of George Washington's letters to Lund Washington during this period have been lost, it is impossible to know why it took so long to straighten out the misunderstanding over the intended function of the building. But by December 3, 1775, it is clear that Lund had received the response from his cousin that he had been seeking, as he stated: "I shall alter the Servts Hall – If it is not intended for a Wash House one of the Chimneys is rather larger than it should be, it was done by Mrs. Washingtons Derection, but as they have the same outward appearance I know of no inconvenience that will arise from it."4 Two weeks later, Lund may have written with some relief that his men had "alterd the Wash house & are now at worck upon it."5

The space was divided into two equal parts by a central partition, with the doorways set adjacent to the partition on either side. The fireplace in the east room was much larger than the one in the west room, because of its intended use as part of the clothes washing operation. The two rooms located on the second floor were also heated with gable end fireplaces.

William Pearce and his family took up residence in the servants' hall by the end of 1793, the year that he accepted the position as Mount Vernon's manager. The next spring Pearce wrote to Washington proposing to make a number of alterations to the building. Surviving structural evidence indicates that Pearce did, in fact, make the changes he suggested. Once Pearce added the doorway in the partition to allow direct access between the first floor rooms, it would have been much more convenient for him and his family to use the entire structure as quarters. The second floor rooms continued to be used as bedrooms. The west room could have accommodated Pearce's office and still have functioned as a general domestic space.

Evidence for other modifications to the building that were conducted in the nineteenth and twentieth centuries are also apparent. In terms of the layout of the building, the most significant were adding a partition in the west room that, together with the existing partition, served to create a central hallway centered on the south door, and changing the configuration of the stair to the second floor. Access to the stairway originally had been from the west room and it was a much steeper affair with four winder steps turning ninety degrees to the doorway at the base. In the nineteenth century the stairway was rebuilt, with a landing and a second run of steps added, and terminated in the east room instead of in the west.

A number of other changes were made in the nineteenth century. First, a third exterior door was added to the north facade sometime before 1857. In that year, the painter Eastman Johnson depicted the interior of the east room as well as the north facade. In both views he shows a doorway at the northeast corner of the building. At a later date a window was added opening on the west room. By the end of the nineteenth century the doorway had been removed and replaced with a second window. In 1889 three dormer windows were added to the north side of the roof, to provide light and ventilation to the second floor rooms. They had been adapted as quarters and later were converted to office space.

Bibliography:
An Inventory of the Estate of Lawrence Washington Esqr. deceased, as Apprais'd by us the Subscribers the 7th and 8th of March 1753, Unpublished manuscript on file. Mount Vernon Ladies' Association Library.