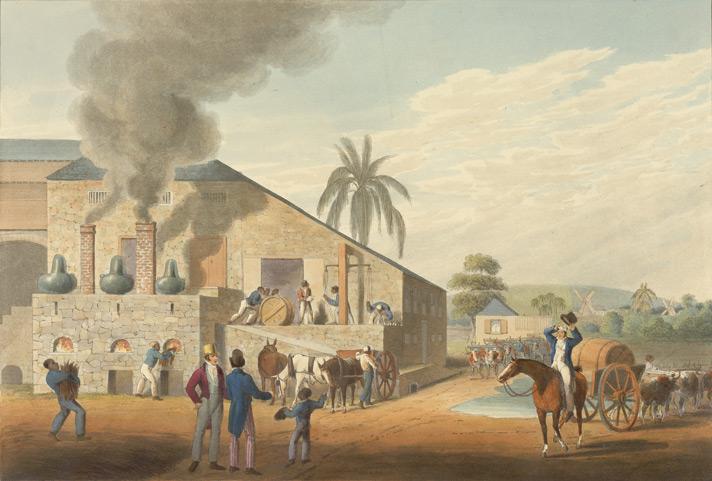 During the colonial era, rum was the preferred alcoholic drink of American colonists. By one estimate, colonists consumed 3.7 gallons annually per head by the time of the American Revolution.1 Naturally, when Britain sought to closely regulate and impose taxes on molasses, used in rum production, a spirited protest ensued. George Washington’s political, military, and personal relationship with rum exemplified the centrality of the drink to colonial society and American independence.

American production of rum boomed, as the colonies traded excess grains for molasses with Caribbean territories. By the English Navigation Acts, the colonies were restricted to trading for molasses with fellow English colonies. However, American colonial merchants flouted the regulations by smuggling cheaper molasses from French colonies, particularly Saint Domingue (Haiti), in the West Indies. With the 1733 Molasses Act, Britain imposed legislation aimed at limiting colonial access to foreign molasses. Instead, large-scale smuggling of molasses became even more commonplace.  While the Molasses Act should have raised 25,000 pounds each year, British officials collected only 259 pounds in 1735.

The Molasses Act anticipated controversial British policies toward the American colonies in the 1760s. In 1764, Britain passed the Sugar Act, legislation that lowered taxation on molasses from six pence per gallon to three, yet encouraged the British Navy to put an end to smuggling. Upon discovering any contraband, the navy was permitted to seize half of the findings. In 1774, Robert Adam, a Scottish merchant residing in Alexandria, Virginia, wrote to George Washington arguing that rum should be imported “from the West Indies here, and not the Round about way from Philadelphia here at Second hand.”2 The tight regulation of molasses, accompanied by a war on colonial merchants, conducted by the Royal Navy, ultimately contributed to the American Revolution.

Like other prominent colonists, Washington interacted with rum in many aspects of his life. For instance, in order to win election in the Virginia House of Burgesses in 1758, Washington attracted voters with charm, entertainment and rum. During his campaign, he supplied voters with 28 gallons of rum, 50 gallons of rum punch, and 82 gallons of wine, beer and cider.

Just as Washington used rum to gain political victory, he also used the drink to boost morale among his soldiers. In June 1779, Washington informed General Alexander McDougall: “I have written to the Commissary urging him if possible to have a pretty good stock of rum at the forts to supply more constantly the fatigue parties.”3 Washington shared the view of many people at the time that liquor helped to keep tired people awake. A supply of rum could mean the difference between an exhausted soldier and one ready to wage war.

Finally, Washington used rum to stabilize plantation life at Mount Vernon. In exchange for a day’s work, he gave his slaves an allowance of liquor. When Washington accused James Butler, an overseer at Mount Vernon, of allowing his slaves 36 pints of rum, Butler claimed that he had given a much smaller portion of “no more than a pint of rum & a pound of Meat to each man.”4 Even as Washington supplied rum to his enslaved workers, he also mandated limits to the practice.

After the American Revolution, rum production continued in the British West Indies, but America’s consumption of the drink significantly decreased. Instead, Americans turned toward whiskey production. Washington, too, reflected this trend, constructing his own distillery at Mount Vernon in 1797.