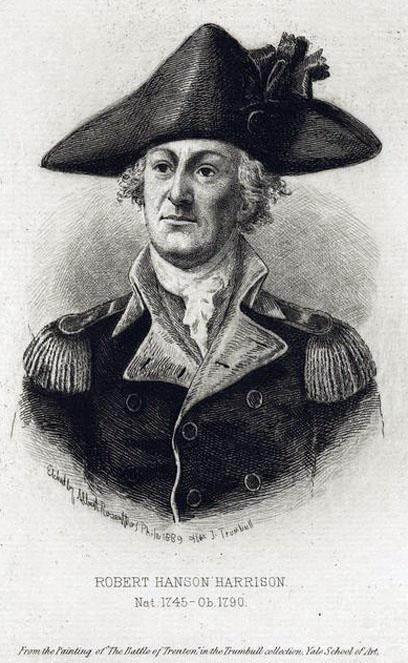 Hailing from Charles County, Maryland, Robert Hanson Harrison established himself as an attorney-at-law in Fairfax County, Virginia, by 1769.   In this capacity, he came to the notice of George Washington and represented Washington on several legal matters in the years leading up to the War for Independence.  Harrison sided firmly with the rebels by actively participating in patriotic associations, from supporting the Virginia Nonimportation Resolves in 1770 to serving as the clerk for the Fairfax County Resolves in 1774.  Most significant of his undertakings, perhaps was his position as a military officer of the Fairfax Independent Company.

When George Washington was appointed Commander-in-Chief of the Continental Army in the summer of 1775, he early considered Robert Hanson Harrison as one of his aides-de-camp.   Harrison accepted Washington’s invitation to join his “military family” in due course and was named an aide in General Orders for November 6, 1775.  Thereafter, Harrison ably assisted the General with the demands of correspondence at headquarters.  The hesitancy of the Commander-in-Chief’s only military secretary, Joseph Reed, to continue his duties led to the appointment of Robert Hanson Harrison in his place on May 16, 1776.   Harrison would serve in this station for the next five years with the rank of Lieutenant Colonel, sharing the hardships and triumphs of the Continental Army.  The Marquis de Lafayette would recall, “In all the actions in which General Washington commanded, Colonel Harrison was present, near the person of the General, and exposed with him to equal danger. He assisted…in the councils of war, where his opinions were highly respected. He was the faithful depository of the secret councils of the General, of the confidential communications to him from Congress, of the military movements that were intended to be made, and of all those secret councils, on the preservation of which the success of the army, and of the revolution itself, depended…”

When Robert Hanson Harrison left Virginia to join the Continental Army in the autumn of 1775, he left his two motherless daughters in the care of his father.  The deaths of his father and mother-in-law in 1780, left Robert Hanson Harrison little choice but to leave military service in the spring of 1781.   Fortuitously, a seat on the bench of the General Court for the State of Maryland had opened and Robert Hanson Harrison was appointed the body’s Chief Justice on March 12, 1781.  He maintained a correspondence with General George Washington and, after the war, often visited him at Mount Vernon.

With the implementation of the new federal government in 1789, President George Washington nominated Robert Hanson Harrison as an Associate Judge “…for the Supreme-Court of the United States…” on September 24, 1789 and the Senate confirmed Harrison two days later.  Harrison weighed the prospect very carefully, confiding to Washington that “no circumstance of my life ever caused me so much anxiety & doubt.”  He declined the appointment out of concern for embarrassing the President by taking too long to decide.  However, Washington wrote his comrade once again, urging him to reconsider.  With this encouragement, Harrison set out for the seat of the federal government in mid-January of 1790, but illness prevented him from completing the journey.  He had no choice but to turn down the offer yet again.  Of the affair, Dr. James Craik wrote his old friend Washington, “Since [Harrison’s] appointment his mind has been the constant sport of doubt and perplexity. Public Duty and a warm attachment to you, and Acknowledgement to you for your high opinion of him on the one hand, On the other private Obligations and Domestic engagements, with a Supposed incapacity to discharge the great Dutys of his office, in his present deranged State of mind and body, have placed him in a Situation, which he is as ashamed to acknowledge to the Public…”  Robert Hanson Harrison never recovered from his ailments and expired a few weeks later on April 2, 1790.