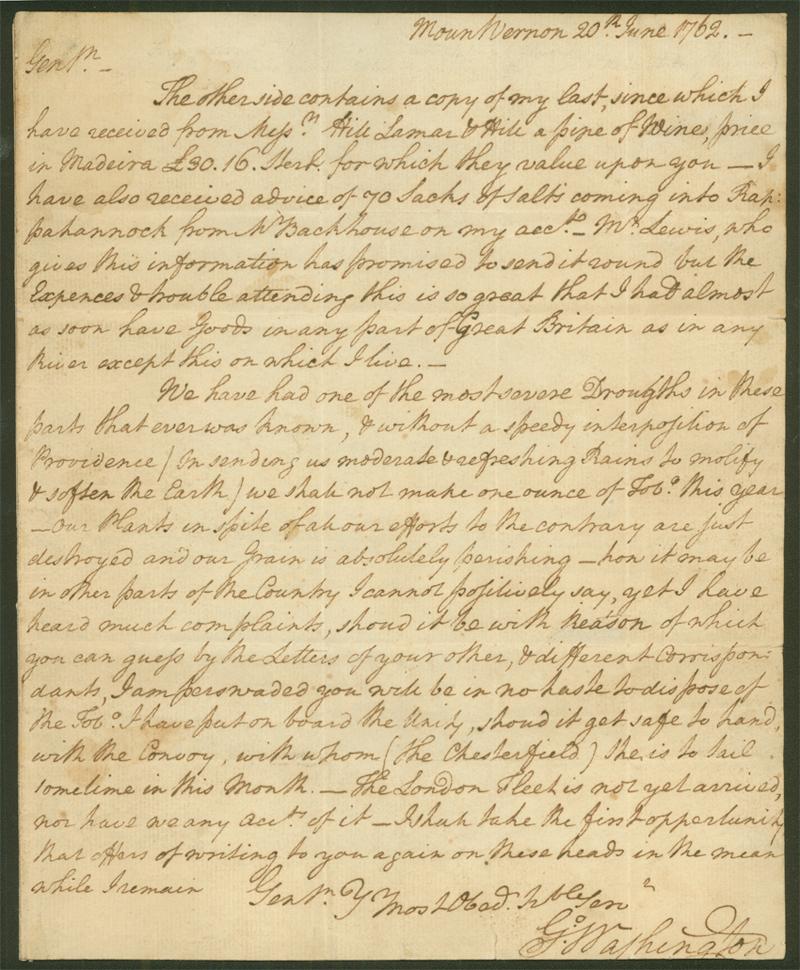 Like many eighteenth century Virginia tobacco planters, George Washington relied on a merchant house in England to sell his crops. A planter would typically ship tobacco to an English port, where a merchant would store it in a warehouse until it was sold. The selling price, after having taxes and fees subtracted, would then be credited to the planter's account. This account could then be used to purchase goods in England that would be shipped back to the planter in the colonies.

Through the 1760s and part of the 1770s, George Washington relied on the large, London-based merchant house Robert Cary & Company. Washington began his relationship with Robert Cary in 1759 after marrying. Martha Washington’s deceased husband Daniel Parke Custis had previously used Cary as his merchant in London; after Custis' death the estate remained with the firm. After marriage, Washington set up his own accounts with Cary so he could manage the Custis estate and his own through a single merchant.

Soon after the start of his business relationship with Cary, Washington became impatient. Washington wrote to Cary in September of 1760, complaining that his tobacco was sold too soon at too low of a price.1 Throughout their dealings, Washington wrote Cary with information regarding expectations of future harvests, while also requesting luxury items.2 Washington even relied on Cary at times to be a clearing house of information for a number of problems associated with his plantation.3

As the 1760s progressed, Washington continued to have poor tobacco harvests. As a result, during this time he began to go into debt to Cary & Company. However, Cary also acted as Washington's creditor, providing funds to Washington when his accounts were low.4 This ensured a cyclical, but continuing financial relationship between the pair. It is also during this time period that Washington realized that he would have a difficult time paying off his accumulating debt. As a result, Washington requested Cary send a full statement of his accounts, in order to assess his financial standing.5

In September of 1765, Washington wrote to Cary stating that if he did not start receiving a higher price for tobacco he would find a merchant who could promise a better profit.6 This letter also revealed Washington's desire to switch crops away from tobacco, as he inquired about the price that hemp was selling for in London.7 Three years later in 1769, Washington signed a non-importation agreement regarding goods taxed by the British Parliament for the purpose of raising revenue.8 As a result, Washington's overall imports from Britain dropped by 130 pounds sterling for the year.9 This shift impacted the business relationship between Washington and Cary, already deteriorating thanks to the sometimes contentious relationship between the two. Washington's last major request to Cary was in 1772, when he wrote searching for a gardener to help improve the grounds of his estate.10

By 1773, Washington ceased listing items imported by Cary in his plantation ledgers.11 In November of that year, Washington ordered Cary to discharge his debts after the death of Patsy Custis. Washington gained control over money in Custis' account with Cary and used it to pay off some of his lingering debts.12 By 1774, Washington was no longer conducting regular business dealings with Cary.