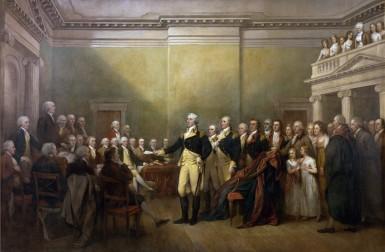 On December 23, 1783, then commander in chief of the Continental Army, George Washington, addressed the Continental Congress in Annapolis in order to resign his military commission. The resignation not only signified the end of Washington’s tenure as commander in chief, a position to which he was appointed to on May 9, 1775, but also Washington’s desire to return to his Mount Vernon estate as a private citizen. Americans ever since have viewed this event as a testament to Washington’s republican values, as he willingly surrendered power of the army back to the governmental body that first appointed him.

The main fighting in the Revolutionary War came to an end when British General Charles Cornwallis surrendered at the Siege of Yorktown in October 1781. However, Washington retained control of the Continental Army until an official peace between Britain and the United States was established. In early December 1783, after having quelled the Newburgh Conspiracy the previous spring, Washington bid farewell to his officers at Fraunces Tavern in New York City and began making his way to Congress, with the intention of resigning his military commission. After various stops, Washington arrived in Annapolis, where Congress was convening, on December 19, 1783.

In a letter to the President of Congress, Washington wrote that “It is essential for me to know their pleasure, and in what manner will be most proper to offer my resignation, whether in writing or at an Audience.”1 On December 20, Congress determined that Washington would resign “to a public audience, on Tuesday next [December 23], at twelve o’clock,” and that, “a public entertainment,” was to be held on Monday, December 22.2 Congress formed a committee consisting of Thomas Jefferson, James McHenry, and Elbridge Gerry to plan the event, and their proposal was adopted on December 22. Washington’s resignation was intended to emphasize the power of Congress, as is evident with the final stipulation, that “when the General [Washington] rises to make his address, and also when he retires, he is to bow to Congress, which they are to return by uncovering without bowing.”3

On the night of December 22, an elegant dinner was held in honor of Washington. David Howell, a delegate from Rhode Island, recorded that “about 200 attended & partook of the feast—after which 13 toasts were drank under a discharge of 13 cannon.”4 Delegate James Tilton of Delaware recalled that Washington added an additional toast for “Competent powers to congress for general purposes.”5 Tilton also noted that Washington “danced in every set, so that the ladies might have the pleasure of dancing with him, or as it has since been handsomely expressed, get a touch of him.”6

As planned, Washington addressed Congress on December 23, in what is now Maryland’s Old Senate Chamber. His speech was highly emotional. According to James McHenry, “[Washington’s] voice faultered and sunk.”7 David Howell reported “a most copious shedding of tears.”8 Washington famously ended his address to Congress by stating, “Having now finished the work assigned me, I retire from the great theatre of action, and bidding an affectionate farewell to this august body, under whose orders I have so long acted, I here offer my commission, and take my leave of all the employments of public life.”9 In what he considered the last act of his public life, Washington handed his commission, along with a copy of his address, to the President of Congress, Thomas Mifflin. Mifflin responded with a preplanned speech, which was found to be “without shew of feeling, tho’ with much dignity.”10 Washington bowed to Congress, and after some formal goodbyes, he left Annapolis and made it home to Mount Vernon for Christmas.

The story of Washington’s voluntary resignation spread across the country and the globe, as he astonishingly gave up political power to return to his farm. Delegate James McHenry remarked, “the events of the revolution just accomplished—the new situation into which it had thrown the world—the great man who had borne so conspicuous a figure in it, in the act of relinquishing all public employments to return to private life. . .  all conspired to render it a spectacle inexpressibly solemn and affecting.”11 Across the Atlantic, upon learning of Washington’s resignation from public life, King George III reportedly told the American-born artist Benjamin West: “If [Washington] does that, he will be the greatest man in the world.”12 Another American painter, John Trumbull, was in London during Washington’s resignation, an event which he found, “excites the astonishment and admiration of this part of the world. ‘Tis a Conduct so novel, so inconceivable to People, who, far from giving up powers they possess, are willing to convulse the Empire to acquire more.”13 When commissioned by the American government in the 1820s to paint four scenes of early American history, Trumbull famously immortalized Washington’s resignation. Washington Resigning his Military Commission currently hangs in the Rotunda of the Capitol Building alongside other scenes of monumental civic importance, including The Signing of the Declaration of Independence.

Washington was very conscious of the historical significance that would be placed on his resignation and return to private life. For many of his contemporaries, he was the American Cincinnatus, an image he cultivated. Lucius Quincticus Cincinnatus was a Roman hero who returned to his farm after taking up the sword for Rome. Through resigning his commission, Washington garnered immense respect and admiration from the American people. Ironically, his elevated status meant that Washington’s retirement did not last long. Begrudgingly, Washington attended the Constitutional Convention in 1787, where he was unanimously elected as its president. The other delegates found Washington’s mere presence to be crucial to the success of the endeavor. After the Constitution was ratified, Washington was unanimously elected to be the first President of the United States. He was sworn in on April 30, 1789, and served two terms before voluntarily giving up power for the last time.