The son of portraitist Charles Willson Peale, Rembrandt Peale's natural talents had been developed by his father and honed from many hours of copying portraits in Charles Willson Peale's museum. Born on February 22, 1778, Rembrandt Peale shared his birthday with George Washington. His first encounter with George Washington took place on July of 1787.

Washington posed for Charles Willson Peale while in Philadelphia attending the Constitutional Convention. Relying on a long association, Peale approached Washington on his son's behalf in 1795, and the President agreed to three sittings of three hours each, from seven to ten in the morning.

By the time Washington arrived for the first sitting, it was agreed that Charles Willson Peale would provide a reassuring presence, sparing Rembrandt the need to talk and paint at the same time. Rembrandt Peale's life study revealed an aging George Washington of sixty-three whose firmly set mouth and skeptical eyes gave his expression a somewhat dour cast. The young artist succeeded in capturing the grandeur of his subject; the force of the gaze and the line of the jaw hint at the determination and the sheer physical presence of Washington. After the third and final sitting with Washington in 1795, Rembrandt Peale hurried off to Charleston, South Carolina, where he made at least ten copies of his portrait.

For years Peale was haunted by his desire to present an inspiring, grandiose image of Washington. Peale knew that the man he had painted in 1795, worn down by the presidency was no longer the commanding presence of the years of the Revolution. Peale was determined to create a likeness of Washington that would transcend representational accuracy, to convey the heroic qualities that Washington produced in the minds of many Americans. It was this ideal Washington that Peale felt he had fallen short of in each new portrait he attempted. Peale's family began to believe him obsessed, perhaps dangerously so and his father told him bluntly that the task was impossible. 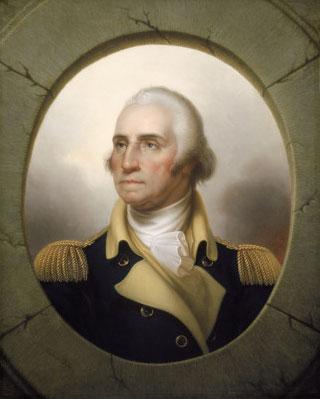 Nevertheless, in 1823 Peale decided to make one last effort. Peale was inspired by many different sources, including the works of his father and the bust portrait by Jean-Antoine Houdon. What Peale created, however, was something quite different, an image of Washington that was as much icon as likeness. Peale painted Washington in bust pose, facing left and framed by the massive stone oval that gave rise to the title "Porthole" portrait. Beyond the subject's head and shoulders drifted the clouds of some republican Olympus.

For weeks following the completion of the portrait, Peale's studio was crowded with hundreds of visitors eager for a glimpse of what was already said to be a remarkably faithful likeness of George Washington. The artist himself was anxious to solicit the opinions of men who had actually known Washington and soon collected a series of glowing endorsements that he later copied into his memoir, including from Washington's nephew Bushrod Washington and Chief Justice John Marshall. In 1832, Peale sold the original Porthole portrait to Congress for the rather significant sum of two thousand dollars. It still hangs today in the old Senate Chamber of the United States Capitol.