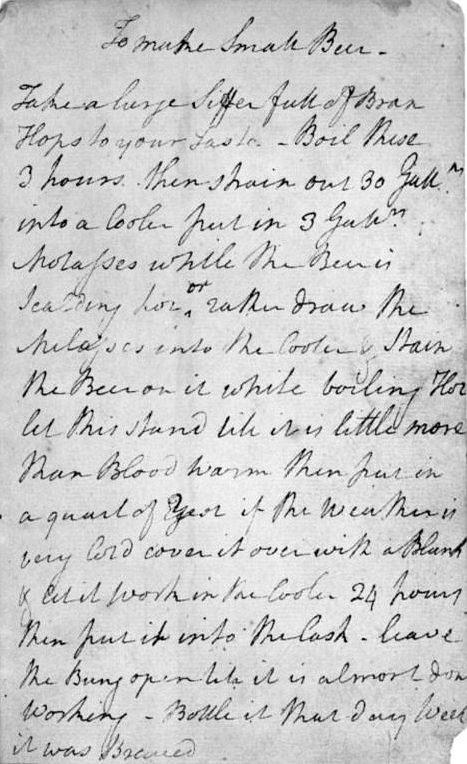 George Washington’s recipe for “Small Beer” appears in a 1757 notebook of his, which can be found today in its original form at the New York Public Library.1 According to the notebook’s date, Washington would have been about twenty-five when he penned this recipe, situating him chronologically in the French and Indian War and geographically at Fort Loudoun with the Virginia militia. In the notebook, the recipe, simply titled “To Make Small Beer,” is preceded by a list of “Sundry things to be done in Williamsburg if I go down [there] in November.”2

“Small beer,” as opposed to typical beer, is notable for its low alcohol content. The recipe’s inclusion in Washington’s diaries during wartime suggests that it was consumed as a regular beverage - and even perhaps an occasional substitute for water - among troops. At Mount Vernon, beer was a favorite, but such a non-alcoholic beer would rarely have been consumed by the Washington-Custis family and their guests. Instead, small beer was given to paid servants, slaves, and children, while its finer, more alcoholic counterpart was reserved for those who could afford it.

The recipe is succinct, requires very few ingredients, and asks a remarkably short preparation time of little more than a day (three hours of boiling bran hops, time to stand, then twenty-four hours to “Work in the Cooler”). It also takes into account the environmental factors of making the beer outside of a brewery, and details specifically that “if the Weather is very Cold cover it [the beer] over with a Blanket.”3 The recipe also calls for three gallons of molasses in the thirty-gallon brew, making the beer unusually sweet. The amount of molasses called for in the recipe was likely to mask the unsavory taste of the basic and hastily made brew.

Washington took up alcohol production as an official business in the last years of his life. There is no evidence, however, that he considered brewing beer for commercial purposes. Rather, in 1797, Washington started a whiskey distillery at Mount Vernon thanks to convincing from his plantation manager, James Anderson, who claimed that it would make good use of Washington’s extant grain plantation and produce considerable profit. Indeed, with Anderson’s expertise, Washington’s whiskey production reached an annual rate of 11,000 gallons by 1799. Today, the distillery at Mount Vernon has been reconstructed and is once again producing small quantities of whiskey for sale to the public.

Meanwhile, since its recent rediscovery, Washington’s small beer recipe has been recreated by multiple historical beer connoisseurs. In 2011, the New York Public Library and Brooklyn-based Coney Island Brewing Company partnered to brew a porter similar to the recipe, but amended slightly to appeal to a contemporary drinker’s palate.4