George Washington viewed the Proclamation of 1763 as a temporary measure, and believed it would be quickly rescinded. The Mississippi Land Company, Washington's most ambitious speculation project, sought to expand American colonization into Native American territory west of the Appalachians.

Pontiac’s Rebellion as an armed conflict between the British Empire and Algonquian, Iroquoian, Muskogean, and Siouan-speaking Native Americans following the Seven Years’ War. The violence represented an unprecedented pan-Indian resistance to European colonization in North America. 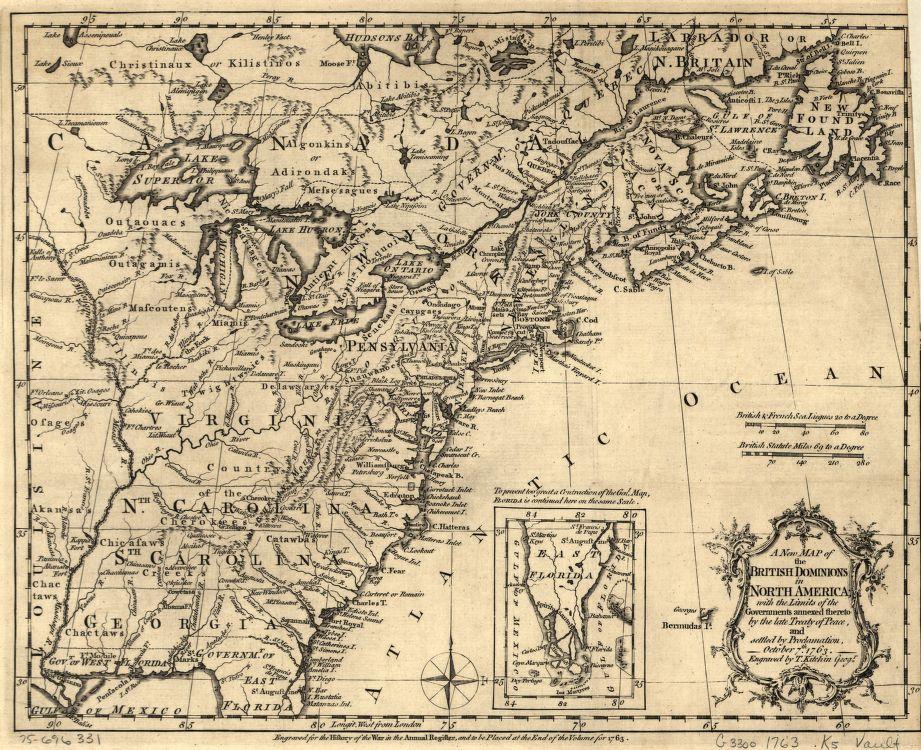 The Proclamation Line of 1763 was a British-produced boundary marked in the Appalachian Mountains at the Eastern Continental Divide. Decreed on October 7, 1763, the Proclamation Line prohibited Anglo-American colonists from settling on lands acquired from the French following the French and Indian War. This measure advanced British governmental efforts to discourage westward expansion in the decade before the American Revolution, an objective motivated by a number of sociopolitical and economic factors. Officials in London feared that an increased Anglo-American presence in the western territory would encourage Native American violence that, when paired with resistance from French settlers in the region, would incite another expensive conflict for the empire. In addition, the British government viewed westward expansion as a threat to their mercantile economic system, expressing concern that opening up the west to farming families would provide the colonies with opportunities to gain economic independence through commercial agriculture. While Britain intended for the boundary line to alleviate tensions between Anglo settlers and indigenous peoples, eager colonists largely ignored the proclamation and settled beyond the boundary with few consequences from the government.

The Royal Proclamation was more successful in its ability to restrict the aims of private, Virginia-based land companies and their investors who sought to capitalize on the sale of lands in the Ohio Valley. As a member of the Virginia gentry, a patron of numerous land companies, and an established surveyor, the boundary line profoundly affected George Washington. Washington deemed the Royal Proclamation’s controls on trade and migration discriminatory against colonials seeking to alleviate personal debts through profitable landholdings, particularly veterans of the French and Indian War. As many of Washington’s counterparts shared these views, the Proclamation Line of 1763 was significant in that it marked the beginning of a clear ideological break with the mother country. The divergent social, political, and economic perspectives that emerged among Virginia’s wealthy elite ultimately aided in pushing the colony to rebellion in the following decade.

The end of the French and Indian War brought great geographic and political changes to North America. The Treaty of Paris, signed on February 10, 1763, effectively removed France from the continent, forcing her to cede all territory east of the Mississippi River to the victor, Great Britain. In gaining these land holdings, the British declared their American colonies to 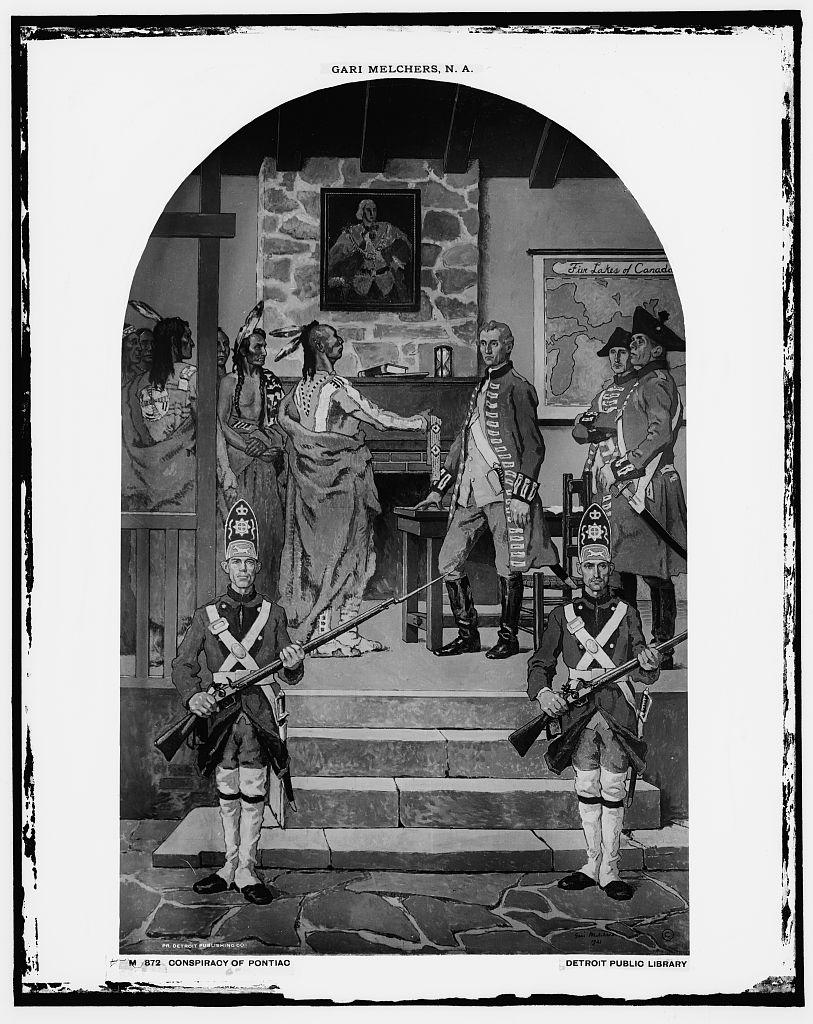 be complete and secure from external threats. However, this post-war agreement produced numerous internal challenges that together induced the Crown to establish the Proclamation Line. Immediately following the Treaty of Paris, inhabitants from the empire’s Atlantic colonies assumed these newly acquired lands were free and open for settlement and many moved west of the Appalachian Mountains. Triggered by settler encroachment and angered over Britain’s suppressive diplomatic policies, a loose confederacy of Indians from the Ohio Valley and Great Lakes regions attacked a number of British forts and settlements in an effort to defend their lands and preserve their political autonomy and traditional ways of life. This uprising, known as Pontiac’s Rebellion, quickly spread, reaching the Illinois Country and Virginia by the summer of 1763. As Native American war parties destroyed dozens of British forts and killed hundreds of civilians, retaliatory aggression from Americans illuminated the need to segregate both groups. Though the British government assured its American citizens that the Proclamation Line was enacted for their protection, many interpreted the act as a pro-Indian measure. In restricting Anglo-American settlement beyond the Appalachians and prohibiting governors from transferring Native American lands to private companies or individuals unless previously acquired by Great Britain through an official treaty, the Crown formally acknowledged that Native Americans possessed certain land rights, evoking widespread colonial discontent and frustration.

Britain’s desire to maintain their mercantile economic system also encouraged the creation of the Proclamation Line. Within the British mercantile world, colonies were to produce raw materials for export to the mother country, where they would be produced into manufactured goods and sold to consumers within the empire. To keep her wealth internalized, Great Britain enacted a number of regulations throughout the seventeenth and eighteenth centuries, such as the Navigation Acts, prohibiting her colonies from trading with foreign markets. Following the French and Indian War, Britain feared that westward expansion would lead to a growth in commercial agriculture, allowing farmers to profit by smuggling excess crops to external Atlantic markets. Instead, the government sought to protect mercantilism by encouraging colonial growth to the north and south in an effort to populate the newly acquired provinces of Quebec, East Florida, and West Florida. This would not only limit the establishment of commercially profitable farms on newly acquired western lands, but would also keep settlers within close range of Britain’s economic and political influence. Consequently, many colonials of varying socioeconomic backgrounds viewed the Proclamation Line and its restrictions as repressive measures put in place by the Crown to secure increased control over affairs in their North American colonies.

While the Proclamation Line generally failed to restrict the migration of individual settlers, it adversely impacted Virginia’s landed gentry through the mid-1760s. These men had been investing and speculating in land since the 1740s, preliminarily granting millions of acres of western territory to firms, such as the Ohio Company, for future sale. However, the French and Indian War and subsequent Indian treaties interrupted these land companies’ designs, during which time their preliminary grants lapsed. The restrictions accompanying the Royal Proclamation of 1763 prevented investors from gaining the necessary titles to secure their land claims. These constraints particularly affected George Washington, who had dedicated much of his life to land speculation in an effort to achieve economic independence and distinction among Virginia’s privileged class. Washington opposed Britain’s desire to restrict the growth of commercial agriculture, and viewed westward expansion as inevitable; in his view, the Proclamation Line was a temporary measure, put in place to calm Native Americans in the wake of French removal from the continent. This opinion prompted Washington to petition the Virginia government to release tracts of land that had been promised to French and Indian War veterans, while joining with other Virginia speculators in lobbying the Crown to push the border further west. Washington’s ventures proved successful with the 1768 Treaties of Fort Stanwix and Hard Labour, and again in 1770 with the Treaty of Lochaber.

Legacies of the proclamation were social, political and ideological. Though scholars debate the level to which the declaration actually recognized Native American autonomy, many Indigenous peoples, particularly in Canada, cite the document as Britain’s first formal acknowledgement of Indian land rights and self-determination. Historians also disagree over the extent to which the proclamation contributed to the outbreak of the American Revolution, with most asserting that the boundary dispute did not directly instigate the conflict. Many, however, allege that the ideological consequences of the proclamation were more significant than the existence of the boundary itself. Resentment for the British Empire and her interference in colonial affairs bonded Americans of varying socioeconomic backgrounds on a philosophical level. The ideological break with the mother country promulgated by the Proclamation Line of 1763, particularly for governmental leaders and Virginia’s landed gentry, served to push the colonies into rebellion in the following decade.

Calloway, Colin. The Scratch of a Pen: 1763 and the Transformation of North America. New York, NY: Oxford University Press, 2006.

Curtis, Thomas D. "Riches, Real Estate, and Resistance: How and Speculation, Debt, and Trade Monopolies Led to the American Revolution." The American Journal of Economics and Sociology 73, no. 3 (July 3, 2014): 424-626.