Noted as one of the most influential architects and city planners in American history, Pierre “Peter” Charles L’Enfant is most famous for designing the nation’s capital, Washington, D.C.  Though today he is commonly referred by his French birth name, Pierre, L’Enfant referred to himself as “Peter,” the anglicized version of his name, after coming to America to fight in the Revolutionary War.1

L’Enfant was born August 2, 1754, in Paris to artist Pierre L’Enfant and Marie Charlotte Leullier. Spending his childhood in Paris, L’Enfant eventually went on to study under his father at the Academie Royale de Peinture et de Scultpure.

In September 1776, L’Enfant, as a Lieutenant of Infantry in the French Colonial Troops, offered his service to the American cause in the Revolutionary War. He would go on to serve as an Officer in the Army Corp of Engineers under George Washington at Valley Forge and Casimir Pulaski at Savannah. L’Enfant sustained a serious leg injury during the siege of Savannah in October of 1779 and was later taken as a prisoner of war during the battle for Charleston in May 1780. After his release and short stint on parole in July 1781, he continued serving in the Continental Army in the engineer corps.

In April 1782, L’Enfant secured work on his first architectural project in the United States, designing a hall in Philadelphia for the French ambassador’s celebrations of the French Dauphin, Louis XVI. This influential event gave him enough congressional favor to promote him to the rank of major in May 1783.  L’Enfant went on to design the insignia and diploma for the newly established Society of Cincinnati, a fraternity of Continental Army officers.

After his discharge in January 1784, L’Enfant moved to New York City and started work as an architect, designing the General Montgomery Monument and the new alter for St. Paul’s Church in Manhattan. In 1788, L’Enfant received a commission to remodel Federal Hall when New York was chosen as the first location of the new federal government under the Constitution.

L’Enfant is most remembered for his work with George Washington to design the new federal city that became Washington, D.C. He first wrote Washington in September 1789 offering his services to design the future federal city.2 The Residence Act of 1790 established the site for the seat of government on the banks of the Potomac River, and Washington appointed L’Enfant to design the city nearly a year later.  L’Enfant’s plan for Washington would combine traditional European urban planning elements, such as grand boulevards and squares, with republican symbolism in the placement of national government institutions. The size of the plan dwarfed any other European or American city of the period, fitting into Washington’s and his own vision of the capital of a vast empire. In a letter to Thomas Jefferson in February 1792, L’Enfant described his ambitious vision: “[T]o change a Wilderness into a City to erect and beautify Buildings . . . to that degree of perfection necessary to receive the Seat of Government of so extensive an empire, in the short period of time that remains in effect these objects is an undertaking vast as it is novel.”3 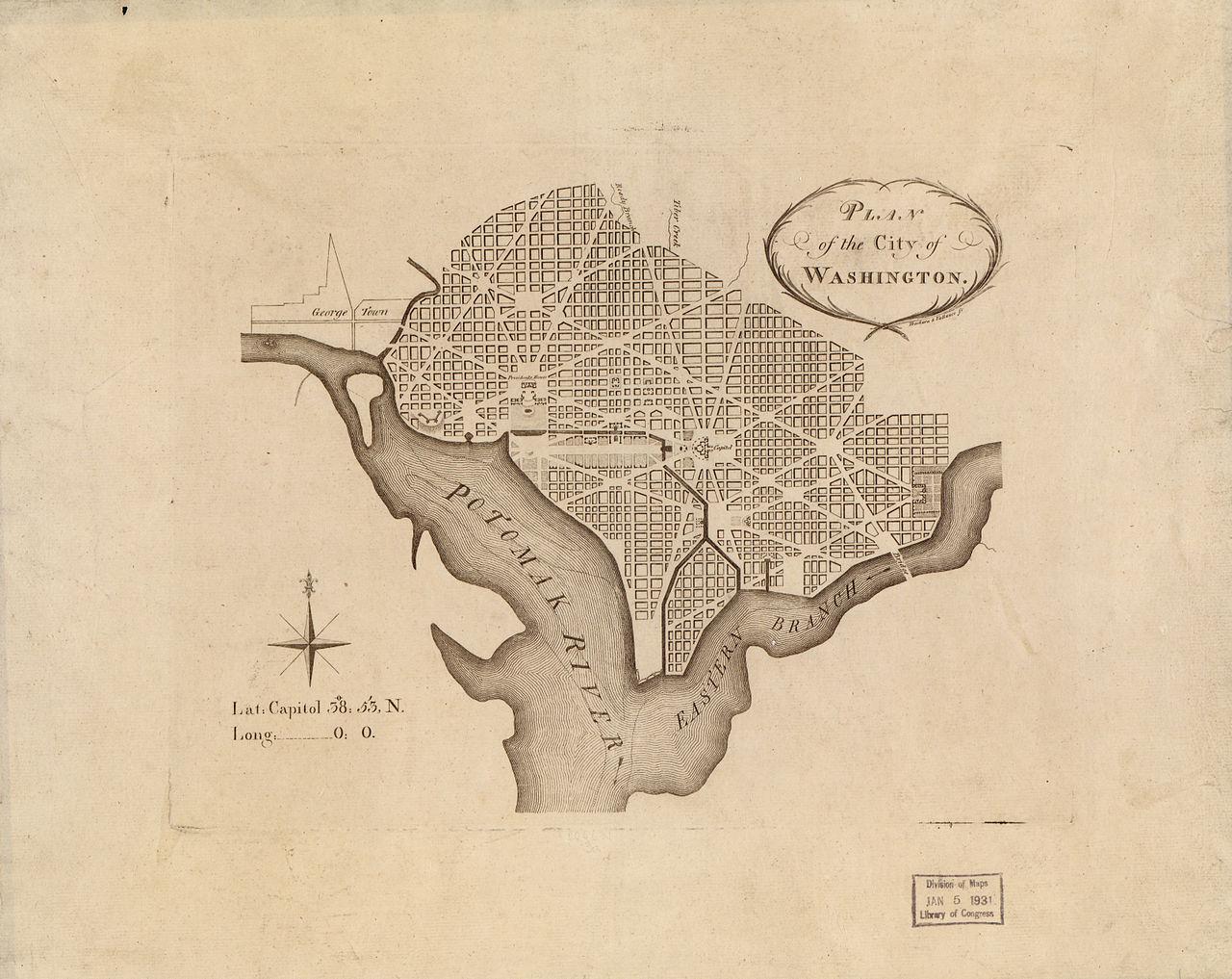 With a plan set, L’Enfant began work with the three Federal Commissioners of the District to survey the land. Yet, tension rose between them, as L’Enfant defied the commissioners by refusing to share his plan for the city and demolishing the house of Daniel Carroll of Duddington, Maryland, in December 1791.4  In February 1792, Commissioner David Stuart wrote to Washington with an ultimatum that the commissioners had “come to an unanimous resolution, to resign our very enviable offices” if L’Enfant did not subordinate.5 In response, Washington asked Alexander Hamilton to draft a letter for Thomas Jefferson to reprimand L’Enfant for his continued insubordination. L’Enfant chose to resign rather than submit control to the commissioners, whom he viewed as a threat to his plan. Washington did not wish to see L’Enfant depart from the project, writing “The continuance of your services . . .  would have been pleasing to me.”6

After his departure from the federal city project, L’Enfant completed the design for Paterson, New Jersey, as well as the unfinished Morris Mansion in Philadelphia. During the War of 1812, he worked on the designs for Fort Washington to defend the District of Columbia against the British.

Plagued by financial troubles his entire life, L’Enfant died a poor man at the age of 71 on June 14, 1825. Though his influence on the design of the Federal City was forgotten for the greater part of a century, the rediscovery of his original plan was especially influential for the redevelopment of Washington under the McMillan Commission Plan for Washington in 1901.  The plan restored L’Enfant’s grand vision, resulting in the redesign of the National Mall and various memorials that remain the hallmark of Washington, D.C., to this day.7