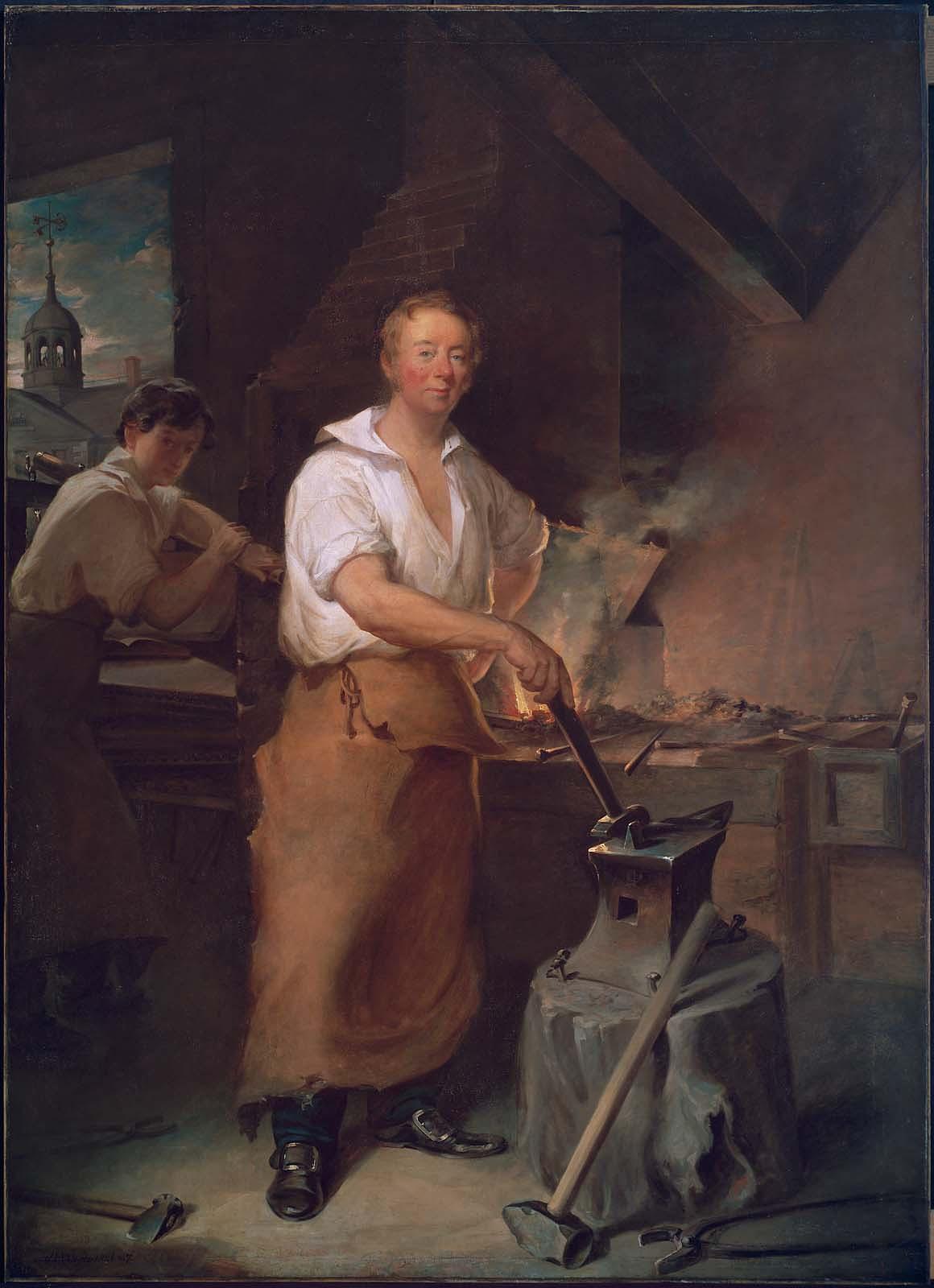 Patrick Lyon was a Scottish-born Philadelphia blacksmith. In 1798, he was arrested and wrongfully imprisoned for robbing the Bank of Pennsylvania. In response, he filed and won one of the first malicious prosecution suits in the history of the United States. He went on to become a prominent businessman and the inventor of the water-throwing hydraulic engine, the precursor to the modern fire engine. In 1825, he commissioned a portrait of himself by John Neagle, entitled Pat Lyon at the Forge, widely regarded as one of the finest examples of early American realistic portraiture.

Lyon was born in 1769 near Aberdeen, Scotland.1 As a boy, he attended the local parish school where he developed an interest in mathematics, astronomy, and philosophy. He left school at the age of eleven. After spending fourteen years in London workshops learning the various branches of smithing, he emigrated to Philadelphia in 1793 against the wishes of his family. During his first years in the city, he worked under established blacksmith Samuel Wheeler before eventually going into business on his own. Lyon married Ann Brindley at Christ Church on July 4, 1795. The following year they had a daughter, Clementina. Both Clementina and Ann died during the yellow fever epidemic of 1797.

Beginning in 1797, much of Lyon’s regular work was in making fixtures for the Bank of Pennsylvania and the Bank of North America. After an attempted robbery of the Bank of Pennsylvania in early August 1798, the bank’s directors decided to move the bank to a temporary location in Carpenters’ Hall. They hired Lyon to move and remount the original iron vault doors that he had made for the bank in their new location. The bank directors insisted that Lyon use imported locks on the iron doors, even after he warned them that the locks would not secure the vault properly. As a result, when the bank was successfully robbed on the night of September 1, 1798, suspicion soon fell on Lyon.

Even though he had fled to Delaware to escape that summer’s yellow fever epidemic, Lyon immediately returned to Philadelphia to clear his name. At an examination by the bank directors and Alderman Robert Wharton, Lyon provided a detailed explanation of his whereabouts to prove he could not have been involved in the robbery. Wharton found his alibi “extremely minute,” and too specific and organized be believable.2 On Wharton’s recommendation, Lyon was committed to Walnut Street Jail on suspicion of being concerned in the robbery but without formal charge. Bail was set at $150,000, commensurate with the amount stolen from the bank and roughly equal to $3 million in contemporary money.

Because Lyon was not formally charged, the jail keeper separated him from other convicts and placed him in solitary confinement in a disused root cellar. He received little food and was permitted few visitors. Malnutrition caused him to lose most of his hair. As yellow fever tore through the jail and the city, Lyon wrote, “I myself never expected to come out alive.”3 Nearly four months later, a local carpenter named Isaac Davis confessed to robbing the bank. Davis said Lyon was not involved in any way. Nonetheless, the bank directors, who also served as private prosecutors in the action, argued that no man in Philadelphia was as skilled as Lyon in making duplicate keys, which they contended—erroneously—had been used to enter the vault. The Commonwealth of Pennsylvania then formally charged Lyon as an accessory before the fact. At the January 1799 sessions of the Mayor’s Court, the grand jury returned the charge against Lyon as ignoramus (insufficiently proven) and he was released.

Despite the dropped charges, Lyon found it difficult to rebuild his standing in the community, particularly because the directors of the Bank of Pennsylvania continued to insinuate his involvement in the robbery. His smithing business suffered grievously as no bank or institution of similar standing would employ him. During this period, unable to secure steady smithing work, he focused primarily on refining his hand-pumped water-throwing engines. By 1803, he had made pump engines for the Philadelphia and Goodwill hose companies. At this time, he married Catherine Taggart, also at Christ Church in Philadelphia.

With his reputation restored, Lyon began buying property around Philadelphia and focused his professional efforts exclusively on the engineering and construction of his water-pumping fire engines. The models “Reliance” and “Old Diligent” remained in use until steam engines took their place. In 1825, Lyon commissioned a full-size portrait from then-unknown painter John Neagle. Although Lyon was no longer a full-time blacksmith, he specified that Neagle depict him at work at his forge, explaining, “I do not desire to be represented in the picture as a gentleman – to which character I have no pretension.”4 The painting was such a success that the Boston Athenaeum acquired it for display. Lyon commissioned a second, more detailed version of the portrait to keep for himself.

Lyon died at the age of 60 on April 15, 1829. His obituary in the Haverhill Gazette remarked, “He was a man of peculiar temperament – a mixture of good sense and misanthropy, forming a curious compound.”5 The second version of the portrait now hangs in the Pennsylvania Academy of Fine Art, next to similarly sized portraits of George Washington and King George III.

1. Lyon's death certificate in the Philadelphia City Archives and his gravestone at St. Peter’s Episcopal Churchyard in Philadelphia both indicate that he was 60 years old at the time of his death on 15 April 1829, making the year of his birth 1769. Some sources have the year of his birth as 1779, but that is incorrect. Ancestry.com. Philadelphia, Pennsylvania, Death Certificates Index, 1803-1915 [database on-line]. Provo, UT, USA: Ancestry.com Operations, Inc., 2011. [Original data: "Pennsylvania, Philadelphia City Death Certificates, 1803–1915." Index. FamilySearch, Salt Lake City, Utah, 2008, 2010. From originals housed at the Philadelphia City Archives. "Death Records." FHL Film Number 1905516]; “U.S., Find A Grave Index, 1600s-Current - AncestryLibrary.Com,” accessed January 7, 2020, https://www.findagrave.com/memorial/90637023

2. Thomas Lloyd, Robbery of the Bank of Pennsylvania in 1798. The Trial in the Supreme Court of the State of Pennsylvania. Reported from the Notes by T. Lloyd. Upon Which the President of That Bank, the Cashier, One of the Directors (Who Was an Alderman) and Another Person Who Was the High Constable of Philadelphia; Were Sentenced to Pay Patrick Lyon Twelve Thousand Dollars Damages, for a False and Malicious Prosecution against Him, without Either Reasonable or Probable Cause (Philadelphia: Printed for the publishers, 1808), 44.

3. Patrick Lyon, The Narrative of Patrick Lyon, Who Suffered Three Months Severe Imprisonment in Philadelphia Gaol; on Merely a Vague Suspicion, of Being Concerned in the Robbery of the Bank of Pennsylvania With His Remarks Thereon (United States Pennsylvania Philadelphia: Printed by Francis and Robert Bailey, at Yorick’s Head, no. 116, High-Street, 1799), 21.

Lloyd, Thomas. Robbery of the Bank of Pennsylvania in 1798. The Trial in the Supreme Court of the State of Pennsylvania. Reported from the Notes by T. Lloyd. Upon Which the President of That Bank, the Cashier, One of the Directors (Who Was an Alderman) and Another Person Who Was the High Constable of Philadelphia; Were Sentenced to Pay Patrick Lyon Twelve Thousand Dollars Damages, for a False and Malicious Prosecution against Him, without Either Reasonable or Probable Cause. Philadelphia: Printed for the publishers, 1808.

Lyon, Patrick. The Narrative of Patrick Lyon, Who Suffered Three Months Severe Imprisonment in Philadelphia Gaol; on Merely a Vague Suspicion, of Being Concerned in the Robbery of the Bank of Pennsylvania With His Remarks Thereon. Philadelphia: Francis and Robert Bailey, 1799.