With its origin in the first meeting of the Virginia General Assembly at Jamestown in July 1619, the House of Burgesses was the first democratically-elected legislative body in the British American colonies.

Amid budding nationalist interest in inland navigation, Washington, Patrick Henry, and others planned for a canal through the Dismal Swamp to link the Chesapeake Bay and Albemarle Sound. 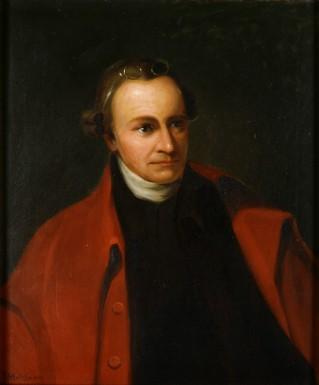 Founding framer and gifted political orator, Patrick Henry was one of the bright lights of the United States' revolutionary generation. Henry was at the forefront of colonial agitation over British policy beginning with his fiery protests against the Stamp Act of 1765. He later served as Governor of Virginia and as a member of the First Continental Congress. Henry is probably best known for his famous declaration, "give me liberty or give me death," made during a speech before the Virginia Convention in 1775.

Henry was born in Hanover County, Virginia on May 29, 1736. His father was a Scottish immigrant originally from Aberdeenshire, while his mother was a member of a prominent Virginia family. Very little in Henry's early life indicated that he was destined to become a revolutionary icon. Though academics were encouraged by his parents, for years he neglected his studies, and as a young man failed at various business ventures.

Henry eventually found his calling as a lawyer, and in 1760 successfully completed his bar exam before notable Virginia attorneys Robert Carter Nicholas, Edmund Pendleton, John Randolph, and George Wythe. He started a law practice and soon became involved in Virginia politics. Henry moved to Louisa County in 1764, where he was elected to the Virginia House of Burgesses. A firebrand from the outset, he quickly established himself as one of Virginia's most radical politicians.

Not long after entering the legislature, Henry authored the Virginia Stamp Act Resolutions in response to the Stamp Act of 1765, a controversial and, to many colonists, oppressive tax measure passed by the British parliament. Henry argued against parliament's right to directly tax the colonies in language so passionately pointed that some accused him of promoting treason.

As the American Revolution approached, Henry became one of Virginia's leading advocates for independence. He helped create the First Continental Congress, and in 1774 won election to that body representing Virginia. On March 23, 1775 Henry made what would become his most famous speech before a gathering of Virginia legislators at St. John's Episcopal Church in Richmond, Virginia. There he urged his fellow Virginians to arm themselves and reportedly underscored his remarks with a statement that would resonate for generations, "I know not what course others may take; but as for me, give me liberty or give me death."

When the Revolution began in earnest, Henry briefly led the Virginia militia before winning the first of his five terms as Virginia's governor in 1776. After the war Henry championed the cause of states' rights and lobbied unsuccessfully against the ratification of the United States Constitution. A staunch Anti-Federalist, he turned down George Washington's offer to become Secretary of State because of the President's strong Federalist leanings. Henry eventually reversed his position and supported American efforts to develop a strong central government. Due to ill health, Henry turned down an appointment by President John Adams to become special envoy to France in 1798. On June 6, 1799, Patrick Henry died at his family's large Virginia plantation, Red Hill. During his lifetime Henry was married twice and fathered a total of seventeen children.