The Oneida are one of the Six Nations Iroquois (Haudenosaunee), and the only one that openly declared its support for the American Revolution. In describing the group's support of the revolution, George Washington explained that, "The Oneidas have manifested the strongest Attachment to us throughout this Dispute."1 The Oneida provided American forces with troops and spies throughout the Revolution, beginning at the Battle of Oriskany in New York's Mohawk Valley August 1777. 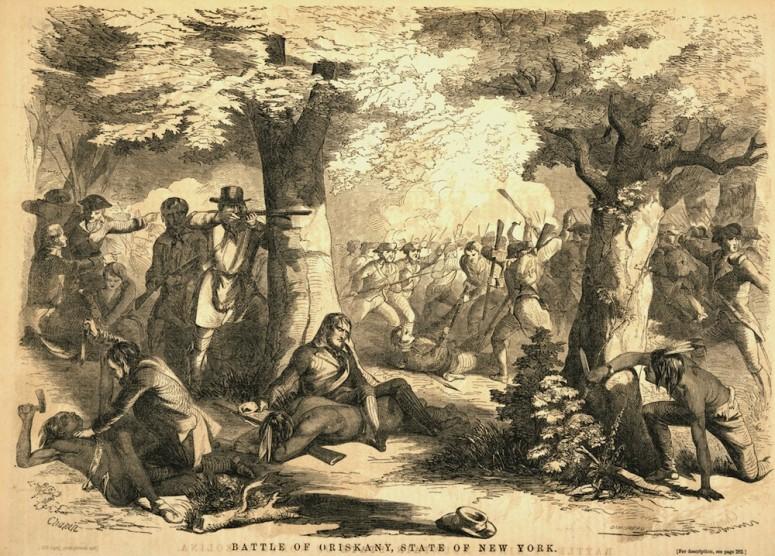 Initially, the Oneida remained neutral, though they were sympathetic to the American cause, partly because of their friendship with the patriot missionary Samuel Kirkland described by Washington as having "an uncommon Ascendency over them."2 The sympathy Kirkland evoked turned into outright support when the British told the Oneida that General Barry St. Leger would march a combined force of British and American loyalist soldiers through the Oneida lands to attack Fort Schuyler, where he hoped to join forces with General John Burgoyne. The Oneida did not believe themselves to be subservient to either the British or their Mohawk allies, and so the Oneida saw St. Leger's action as an offence they were honor-bound to oppose.3

On August 2, 1777, the Oneida rode out to warn the local patriots at Fort Schuyler and in the New York militia of the impending British attack.4 Four days later, the Oneida fought alongside the militia to defend Fort Schuyler. Commanded by General Nicholas Herkimer, the New York troops went into battle and were ambushed by St. Leger and the Mohawk.5 Eventually, however, the Oneida and the New York militia turned back the British after the Mohawk fled, thus preventing St. Leger from meeting Burgoyne as planned. The achievement helped set the stage for a decisive patriot victory at Saratoga in October.

The Battle of Oriskany, named after the nearby river, was one of the bloodiest battles in the Revolution and the only battle where Native Americans fought each other on a large scale.6 Despite the British retreat, the victors sustained heavy losses. The New Yorkers lost almost their entire local militia and the nearby Oneida village was pillaged by the retreating Mohawk.7 Equally important, this battle determined the sides the different Iroquois nations would take in the war and signified the end of the centuries-old Iroquois alliance. 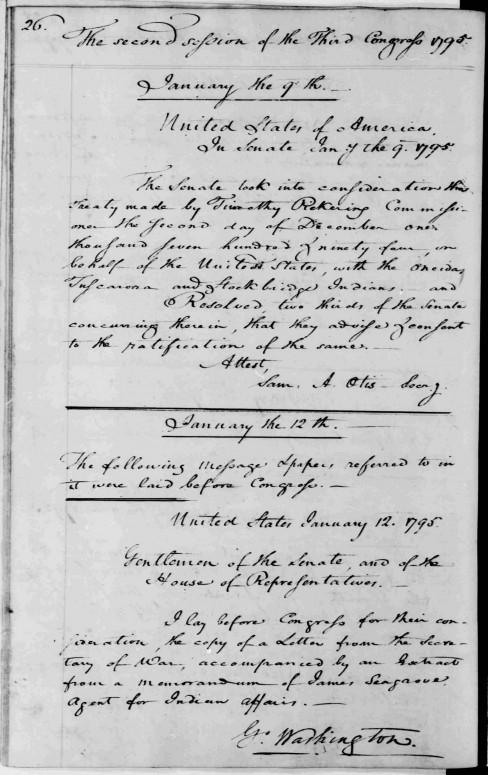 After the Battle of Oriskany, General Washington invited the Oneida to assist the Americans at Valley Forge. When they arrived, Oneida leaders dined with Washington, who gave each leader a wampum belt in gratitude for their help.8 In addition to troops, the Oneida brought much-needed food and supplies. Most notable is the example of Polly Cooper, who gave white corn to the starving troops and taught them how to prepare the grain to make it edible. Polly Cooper remained at Valley Forge that winter, serving as Washington’s cook.9 Despite the great services they performed, the Oneida refused payment for what they had done. To show her gratitude, Oneida oral tradition holds that Martha Washington presented Polly Cooper with a shawl and bonnet.10

General Washington also deployed the Oneida as scouts, soldiers, and spies. Oneida scouts patrolled the area around Valley Forge during the winter of 1777-78. In May 1778, during the Battle of Barren Hill, the Oneida scouts stayed behind so that General Lafayette and his troops could escape, after which they assisted other American officers.11 Oneida men also fought alongside American patriot forces in many battles. Ten Oneida soldiers attained officers' commissions in the Continental Army, and one rose to the rank of lieutenant-colonel.12 Some Oneida acted as spies, intercepting British communications and gathering information on troop movements and strategies, including Deacon Thomas, who hid in the rafters of the council house in a Mohawk village until his assassination in 1779.13

After the war, Congress thanked the Oneida for their help and granted them war reparations. While the U.S. government punished Native American tribes that sided with the British, the Oneida were left in relative peace. Despite their professed friendship for the Oneida, however, state and federal governments prevented the group from buying back most of their ancestral lands.14 The situation worsened when the State of New York claimed land that, according to a treaty, belonged to the Oneida. Congress ruled that the land was to be returned to the Oneida and that New York should pay reparations. However, when New York then attempted to force the Oneida to pay taxes on their land, Congress issued a mixed verdict, exempting the Oneida from state taxes but also ruling that they did not have sovereignty in the lands that they bought.15

5. Paul A. Boehlert, The Battle of Oriskany and General Nicholas Herkimer: Revolution in the Mohawk Valley (Charleston, S.C.: The History Press, 2013), 80.

6. Martin, "Forgotten Heroes," 205; Karim Tiro, The People of the Standing Stone: The Oneida Nation from the revolution through the Era of Removal (Amherst, Mass.: University of Massachusetts Press, 2011), 48.

Bibliography:
Boehlert, Paul A. The Battle of Oriskany and General Nicholas Herkimer: Revolution in the Mohawk Valley. Charleston, S.C.: The History Press, 2013.

Tiro, Karim. The People of the Standing Stone: The Oneida Nation from the Revolution through the Era of Removal. Amherst and Boston, MA: University of Massachusetts Press, 2011.